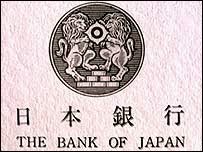 This weekend Prime Minister Shinzo Abe will arrive in Washington.  In the following week, a bevy of LDP Diet members will also descend upon Washington in the annual Golden Week trek.  Obviously, the big attention-grabbing issue is what language Prime Minister Abe will use in his address to the joint session of Congress to speak about the Comfort Women and other historical issues (an attention that is altogether proper).  But whatever he says, he and his supporters will try to soften the potential negative reaction to his view of history by talking up the success of “Abenomics.”  That is, even if we (and the Koreans and Chinese) do not like what the Prime Minister has to say about history, we should be thankful that he is rescuing the Japanese economy.  After all, it was the willingness of the Japanese public to hold their noses about his offensive right-wing nationalism in a hope that his economic policies would be better than sorry record of the Democratic Party of Japan (DPJ) prime ministers in office 2009 to the end of 2012.

The goal of Abenomics was to achieve 2 percent real GDP growth and 2 percent consumer price inflation within 2 years (i.e. by the end of March, 2015).  Their story will be that while the targets have not been reached, all Japan needs is a little more time because fundamentally the policies are working.  The one piece of Abenomics that most of them will tout as being more or less on target, albeit a bit more slowly than anticipated, is monetary policy.  But their story is unduly optimistic.

Spoiler alert: deflation is not over

But what about the intended outcome of this monetary expansion of creating 2 percent consumer price inflation?  This turns out to be a somewhat confusing issue because of the 3 percentage-point increase in the national consumption tax (a sales tax levied on most consumer goods and services).  In addition, energy prices have gyrated in the past two years, further muddying the data.  But you can be sure that Prime Minister and various visiting LDP Diet members will find ways to describe the data to support the notion that the economy is on track to producing 2 percent inflation.  Not exactly.

On the following page is a chart showing the raw consumer price index (with a base year of 2010 = 100) on a monthly basis.  As you can see, there is a jump in the index in April 2015 because of the tax increase.  The chart shows two versions of the consumer price index—the full index covering all goods and services consumed by households, and one excluding food and energy.  Economists prefer to exclude both food and energy because they are so volatile and therefore muddy any attempt to discern underlying trends.  The Japanese government prefers a “Japanese core” index that only excludes food (I have no idea why), but that one remains affected by volatile energy prices so I will skip in this analysis.  To be sure, changing energy prices eventually feed through the economic system and affect prices of all goods and services that use energy (such as airline fares being affected by the price of aviation fuel, which, in turn, is affected by the price of crude oil).

So what does this chart show?  Consumer prices were rising slowly in the year from January 2013 to April 2015.  Since then, however, the trend of the index—both for all items and the one excluding food and energy appear to have flattened or even declined. 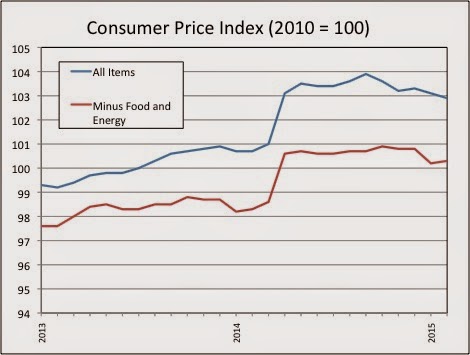 Rather than looking at the actual index number, economists prefer to look at measures of the change over time.  There are two ways of doing this:  comparing one month to the previous month, or comparing one month to the same month in the previous year (called a year-on-year comparison).  Because monthly economic data of any sort if often subject to random short-term events, generally economists use the year-on-year comparison.  But in this case, it is useful to look at both.

If we look at the usual year-on-year comparison, the result is shown in the chart on the following page.  In the few months preceding the start of “Abenomics” monetary policy (which began in April 2013 after Mr. Kuroda was appointed as the new governor of the Bank of Japan by Prime Minister Abe), consumer prices were still falling at a rate of -0.5 percent or a bit more.  Thereafter, prices did begin to rise.  Part of that rise was simply due to the rising price of crude oil (and the increasing importance of that more expensive oil due to the shutdown of all nuclear power plants in the year subsequent to the 2011 Tohoku earthquake/tsunami/nuclear disaster).  By March 2014, just before the consumption tax increased, the overall consumer price index was rising at a year-on-year rate of 1.5 percent 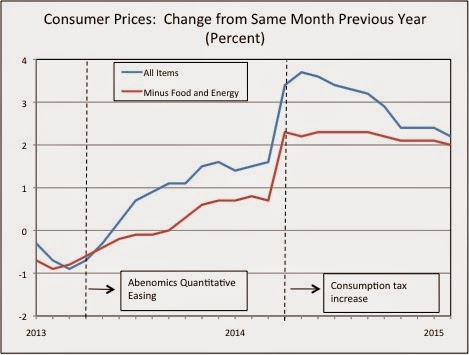 and even the index minus food and energy was rising at 0.8 percent.  While well short of the 2 percent goal, the trend appeared to be in the right direction.

When the tax rate jumped from 5 percent to 8 percent in April, obviously the change in consumer prices increased.  While the tax applies to most consumer goods and services (e.g. housing construction) it does not apply to them all (school tuition fees, for example, are exempt).  In any case, in February 2015 (the latest data available), the overall price index was running about 2.2 percent higher than a year earlier, and the index minus food and energy was 2 percent.  Quite likely these are the numbers that Japanese visitors during Golden Week will tout as showing success of Abenomics monetary policy.

But what happens if we look at the month-to-month change in prices?  The chart on the following page gives those results.  Remember, in this case we are looking at the change in prices in one month compared to the immediately preceding month (the change from January to February 2015, for example).  The numbers here are very small.  After all, if prices increase 1 percent year-on-year, then they changed month-to-month by less than 0.1 percent.  And one can see that the changes do jump around somewhat from month to month.  However, there are several interesting results from looking at these numbers. 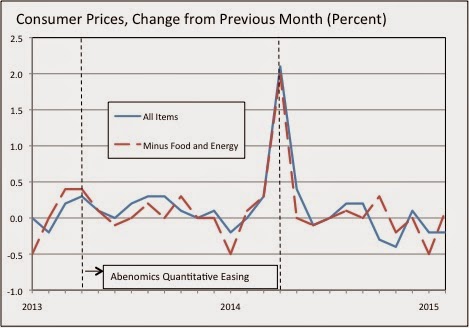 First, prices had begun to rise just before Governor Kuroda got his Bank of Japan Policy Board to embark on quantitative easing.  Second, prices were generally rising slightly month by month after quantitative easing began (except for January 2014).  Third, the spike due to the consumption tax increase becomes very obvious.  In April, 2014 prices jumped 2 percent (both the overall index and the index minus food and energy).  Fourth, prices since April, 2014 have not continued rising.  The explanation that will be put forth by visitors to Washington will be that this is a temporary phenomenon due to falling oil prices.  But the data show the same result for the price index minus food and energy.

These data imply that initially quantitative easing appeared to have a small positive impact on prices in its first year of operation.  But in the year since the tax increase in April 2014, that positive effect on prices has petered out.  Let’s go back to the actual index to measure the changes over time.  Leaving out food and energy, overall consumer prices rose 1.3 percent in the year from April, 2013 through March, 2014 (i.e. the index was 1.3 percent higher in March, 2014 than in April 2013).  Part of that increase was due to increasing oil prices, so the price index minus food and energy rose a much smaller 0.2 percent.  Still positive, but not anything to shout about. But from April 2014 through February 2015, the overall price index fell by 0.2 percent and the index minus food and energy fell by 0.3 percent.  Not only did the price increases stall, but the drop in prices cannot be blamed on the external factor of declining oil prices.

This is quite discouraging—quantitative easing appeared to be having some positive effect (even if the impact once oil price increases are factored out was quite small), but that effect has worn off.  Since late 2014 prices have resumed a resumed a mild decline.  Japan is not yet out of deflation.

But what about the stories of wage increases?  No doubt this development will also be brought up by Japanese visitors.  Toyota and some other large manufacturers have been persuaded by the government to increase wages.  Won’t this help to keep prices rising as firms have to pass along the cost impact of higher wages?  That’s another whole story not worth getting into in this short note.  But briefly:  What the large, politically sensitive Toyota does in bargaining with its union and what happens to all wages in Japan are not necessarily the same thing (remember that just like in the United States, only a small proportion of the labor force is unionized).  More important, firms were so stingy in granting wage increases last year, that even a 2 percent wage increase will do no more than restore the losses workers suffered due to stagnant wages in the face of the consumption tax increase.  No need from that for firms to start increasing prices.

Is there a way to draw a more optimistic picture?  Maybe.  One effect of monetary quantitative easing has been a rather dramatic fall in the value of the yen against other currencies.  This weakening of the currency is finally producing an increase in exports.  As exports rise, so does employment in the manufacturing sector.  With a falling working-age population, increased employment in export-oriented manufacturing causes labor markets to tighten and could possibly produce higher wages—not because the government jawbones companies like Toyota, but because they can get more workers only by paying more.  That might lead to higher prices.  But it is too early to tell if this will really happen (it did not happen during the rapid export expansion of 2002-2007).  At least for the near future, therefore, Japan is not out of the woods on deflation.  So listen to the upbeat talk from Prime Minister Abe and his fellow LDP politicians with a very large dose of skepticism.
at May 06, 2015