Know your Abe Administration: A Guide 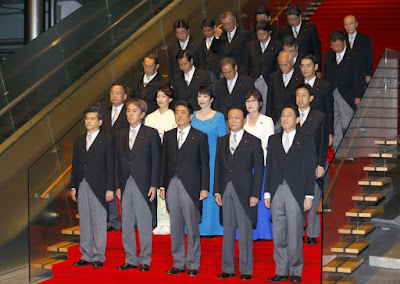 THE ABE ADMINISTRATION: ITS TOP 100 MEMBERS
$36 for Non-APP members
Free for APP members
On January 24, 2017, Asia Policy Point issued its 91-page directory of biographical and background information on all top 100 members of the current Abe Administration: 20 Cabinet Ministers and top appointed government officials. Seventy-four are Dietmembers and 26 are non-politicians such as academics and bureaucrats.
The officials are organized by government ministry and by last name. All known social media accounts are included. Automatic Google Translate can be very helpful in looking at these Japanese-language resources.
Each member’s known affiliations with 20 prominent conservative nationalist parliamentary leagues, caucuses, and issue groups are also identified.
Included is a chapter describing these groups followed by a chapter of charts and graphs for you to visualize the strength and depth of these ideological memberships in the Abe Administration.
For perspective, a Japanese conservative nationalist is different from an American conservative in a number of critical ways. A Japanese conservative nationalist advocates big government; defends social welfare; is wary of individual rights and freedoms; believes in a central government headed by the Emperor under the Shinto religion; aspires to Japan’s independent defense, and rejects that Imperial Japan committed war crimes or started WWII.
at January 28, 2017 No comments:

The Power of Nippon Kaigi 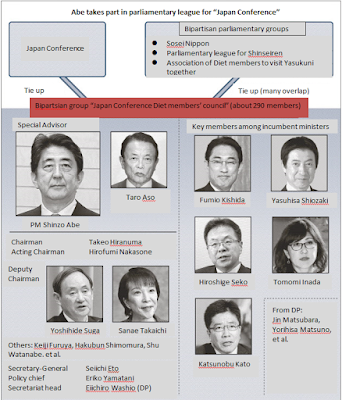 [says Nikkei's headline, but the article text contradicts this conclusion]

Nippon Kaigi [Japan Conference] proposes constitutional revision, visits to Yasukuni Shrine, and the introduction of an education system that better reflects the intrinsic values of Japan to conservative politicians inside the Liberal Democratic Party, the Democratic Party and other political parties. It hopes to attract like-minded lawmakers. It calls for support for conservative politicians and backs them. In this way it maintains its influence.

“This gathering became my first step toward a career in politics,” said Defense Minister Tomomi Inada when as LDP policy affairs chief she attended an annual national convention for the commemoration of war dead that the Japan Conference co-hosted with other groups last year at Yasukuni Shrine.

At this year’s event, Yoshitaka Shindo, the minister of internal affairs and communications in the second Abe cabinet, was present and called for support for the Japan Conference’s activities. Inada and Shindo are two of the core members of the group’s bipartisan parliamentary league, Nippon Kaigi Kokkai Giin Kondai Kai (the Japan Conference Diet members’ council). 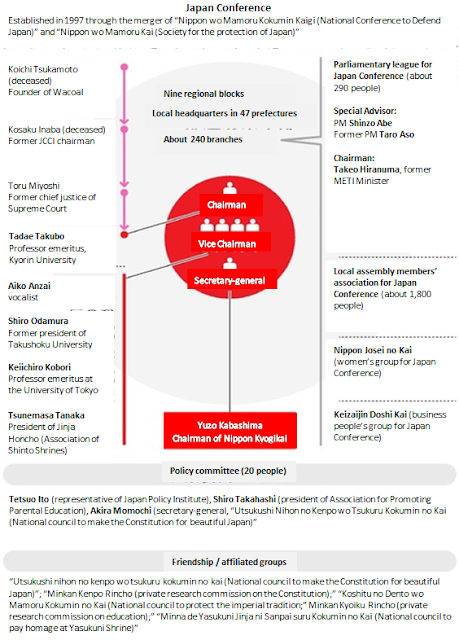 Participation Is Merely “Adding Names to the Roster”
This parliamentarians’ group convenes a general meeting once a year. At the meeting held in March, over 30 Diet members attended and decided on policies on such matters as how to lobby for holding a national referendum on constitutional revision.

Speculation that the Japan Conference has a greater say in the government’s policymaking is sparked by the fact that many incumbent cabinet ministers belong to the group. Though the roster of the latest membership is not made public, Prime Minister Abe and 15 of 19 cabinet ministers belong, according to a source familiar with the matter.

But [asked about their membership,] the offices of several cabinet ministers replied they “have never attended gatherings of the league.” One office staffer said, “We are not aware that we belong to the group.” Though it has a membership of about 290 politicians, only a handful of them – mainly senior old-guard politicians – are active.

The Japan Conference maintains its influence by closely working with the Shinto Association of Spiritual Leadership (Shindo Seiji Renmei, or Shinseiren), which comprises religious groups, such as the Association of Shinto Shrines (Jinja Honcho). With the help of the Shinto community, it has been rolling out a campaign to collect 10 million signatures to revise the Constitution.

But the Japan Conference has a membership of about 38,000 people. While Nichiiren (Federation of Japanese Doctors), the political arm of the Japan Medical Association, delivers about 200,000 votes to the LDP every election, the Japan Conference has an extremely small organizational base and is not in the position to field its own candidates. Its activities are mainly funded by membership fees and it cannot afford to make political donations to conservative members.

With the Abe government shifting to a realistic approach, how to maintain the national momentum of conservative movements will become one issue that the Japan Conference needs to tackle down the road.

The key is how the Japan Conference will keep facilitating discussions on constitutional revision. Within the LDP, there has been talk of extending Abe’s time in office as the party’s president. On the surface, it stands to gain if Abe, who it backs, stays in power for a longer period of time, but matters are not as simple as that.

Another worrisome issue is that its activities are not attracting wide support from the public. Birei Kin, a conservative critic and supporter of the Japan Conference, points out that “the same people always participate in its events” and deplores that its campaigns do not reach many.

Now, the emperor, who is the greatest centripetal force of the Nippon Kaigi, also poses a new challenge for the organization. After the Emperor hinted that he would like to step down while alive, nervousness that the current emperor system (in which the Emperor plays a symbolic role) might change fundamentally is simmering inside the Nippon Kaigi. Although the organization on the surface follows the direction that “we must realize it if that is the Emperor’s will,” among the members opposition and push back are strong. For the Nippon Kaigi, the issue might start a new fire.

In recent years, new members recruited through the Internet, especially among the young, are increasing. That said, the trend of non-partisan groups’ conservatism is the real source of the growing attention paid to the Nippon Kaigi. If in the future the non-partisan groups’ preferences change, the possibility of the Nippon Kaigi losing influence certainly exists.
at January 21, 2017 No comments: 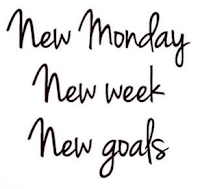 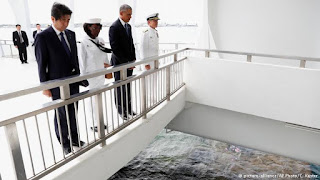 Japanese Prime Minister Shinzo Abe’s tour of Pearl Harbor highlighted reconciliation and putting an end to Pacific War history. However, Abe’s Cabinet officials were of a different mind. While Abe was in the air returning from Pearl Harbor, his Reconstruction Minister and good friend, Masahiro Imamura, paid homage to the war deities at the Yasukuni Shrine.

Shortly after returning to Japan, Defense Minister Tomomi INADA, who had accompanied the Prime Minister to Pearl Harbor, also visited the Yasukuni Shrine. She is said to be Mr. Abe’s preferred successor. When she was the LDP’s policy chief, she initiated a reevaluation the Tokyo War Crimes Tribunal. She now administers this on-going investigation. Reportedly, she once said “Yasukuni is not a place to pledge not to repeat the horror of war again. It is a place to promise that 'we will follow in your footsteps if a contingency occurs in our homeland.'"

Yasukuni is not Arlington, nor is the National Memorial Cemetery of the Pacific that Prime Minister Abe visited in Hawaii. Yasukuni visits have been used in recent decades by Japanese politicians to be naughty. It is a cost-free way to demonstrate independence from the US. The irony is that the visits so antagonize the Chinese that the US is compelled to reaffirm its defense of Japan soon after, drawing Japan closer to the US.

The Meiji Emperor created Yasukuni to militarize a religion (Shinto) in service of the state and to de-legitimatize his enemies (they cannot be enshrined there). It is not a cemetery and it represents only one religion. There are no bodies buried on the grounds. It is for the spirits of the military dead who died fighting for the Emperor who can be identified (the unidentified have their ashes at a non-religious site not far from Yasukuni) and who are not from the under-classes.

Those approved are apostatized--they become gods, one with the Emperor. There are many convicted and otherwise war criminals turned into gods at the Shrine. The Shrine is also only for the Imperial era, which ended August 15, 1945. No one after that date is enshrined. The park surrounding the Shrine has many small memorials to military units that served in the Pacific War, including the Kempeitai (SS-like military police).

The Ministers’ appearance at the Yasukuni Shrine does lessen the impact of PM Abe’s visit to Pearl Harbor. It undermines through deed, his words at Hickam Field, barely 12 hours before. That PM Abe did not fire Inada—who visited Yasukuni as Defense Minister not in her personal capacity—suggests that he condoned her actions.

Abe’s tortured prose lingered on expressions of gratitude toward US treatment of defeated Japan. He interpreted reconciliation as American “tolerance” and posed Japan as being passive in its appreciation. It is as if a thesaurus was consulted for a politically acceptable word meaning compassion, mercy, and humanity.

Unsaid, and maybe unintended, was the contrast of American “tolerance” toward its conquered people to Japan’s own conduct of its war in China and the Pacific. Imperial Japan’s conquests were impressive military victories. They were, however, followed by unjustified and horrific violence against noncombatants, POWs, laborers, and the dead.

Condolences are what Mr. Abe gave to those military dead who died in combat at Pearl Harbor. He did not apologize or justify. The visit was framed as if he was going to Yasukuni to honor and pacify the spirits of warriors.

Standing tall at the water's edge does not turn Pearl Harbor into a symbol of reconciliation. It is not a tolerance for an enemies soldiers and sailors. Reconciliation is how today’s Japan answers to Imperial Japan’s wartime atrocities committed against the unarmed. It is no surprise that the trauma of these cruelties is intergenerational.

As Abe ended his remarks, he acknowledged this by promising to continue to make his “wish a reality.” It is something that still needs work. And something that is a responsibility of the Trump White House.
at January 06, 2017 No comments: