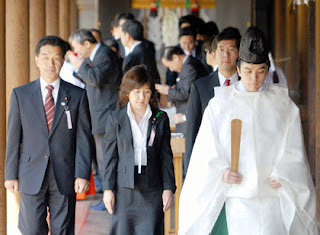 Mrs. Inada visits Washington for the first time as Defense Minister September 15 through 16. She gave a presentation at CSIS on the 15th prior to her meeting with US Defense Secretary Carty. The video of her CSIS presentation last year has been removed. Today's video is above.

Prior to her appointment as Defense Minister, Inada was chair of the ruling party’s Policy Affairs Research Council. In the first Abe II cabinet, she was a multi-portfolio Cabinet Minister. A trained lawyer with accounting skills, she is in her fourth term in Japan’s Lower House. She is close to PM Abe, shares his political views, and is said to be his chosen successor as PM. She is a prominent advocate of ultra-conservative nationalist causes and is cautious toward regulatory changes, such as those needed for joining TPP that would affect Japan’s traditional way of life.

Inada advocates for an aggressive, government campaign to combat “false” international impressions of Japanese war history and rejects the American-imposed constitution as contrary to Japanese values. She heads the LDP policy committee to examine the Tokyo War Crimes Tribunal believing that the war crimes identified were fabrications [this committee was created Nov 20, 2015, anniversary of the handing down of death sentences to Tojo and other Class A war criminals]. She holds leadership positions in parliamentary leagues for visiting Yasukuni and rejecting the Nanking Massacre and Comfort Women as fact. She was a signatory to the anti-Comfort Women advertisements in the Washington Post (2007) and the New Jersey Star Ledger (2012).
at September 15, 2016 No comments: