Why Noda will continue as PM longer than expected 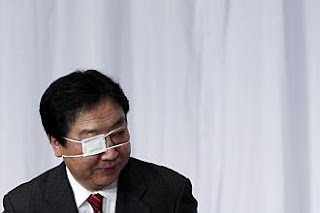 One could get the impression from that the public is (as usual) ready for change after six months of the same Prime Minister. In a Mainichi Shimbun poll of 3-4 March, approval of the Noda Cabinet fell to 28%. Unsurprisingly, in the same poll, the consumption tax increase remains deeply unpopular with 58% disapproving of the two-stage increase, and with 79% skeptical that such an increase would stabilize pension and other social security policies. Yet Yoshihiko Noda has surprising resources to hold on as Prime Minister at the head of yet another configuration of the diverse groups within its ranks. If the question of raising the consumption tax can be settled—then Noda may have a lot more time as Prime Minister as his predecessors.

The latest whiff of change in Nagata-cho was the “rumored” meeting on February 25 between Prime Minister Noda and the LDP’s President Sadakazu Tanigaki. This set free speculation about the chances for a grand coalition. It is one possible outcome of the struggle to raise the consumption tax, and the one that would make the most sense if political parties were to seek coalition partners on the basis of policy agreements. One putative reason for the grand coalition is the opposition of parts of the DPJ and the LDP to Ichiro Ozawa, over the issue of the consumption tax in particular but over the relationship between parties and the bureaucracy and other deeper positions.

Despite the fireworks over the consumption tax, there is much less to the conflict inside the DPJ over Ozawa than meets the eye. First, Noda’s cabinet relies on senior politicians close to Ozawa to steer important policy, including even fiscal policy. Second, Ozawa’s ongoing problems in the political finance scandal involving his political fundraising organization make the duration of his political career uncertain. Third, Ozawa’s group has quietly folded in every other confrontation including the election of PM Noda in exchange for positions of responsibility. The high likelihood of losing any general election resulting from open revolt in the DPJ make them poor material for forcing a confrontation.

A grand coalition would have the advantage of receiving wide public support. Even in the early 1980s, when the LDP and JSP were 180 degrees apart on key policy issues, the public supported a grand coalition as the most preferred option in several NHK public opinion surveys. The condition of floating voters has also strengthened, if anything, since the advent of DPJ government in 2009.

At the same time, Noda is not focused on public opinion but rather on maintaining elite coalitions. The problem is that that while this shores up Noda’s standing with the various parts of the DPJ, the LDP, and with the Ministry of Finance, and foreign investors, the distance from the public is growing rather than shrinking.

As long as Noda’s pledge of “no side” politics is working in practice as well as a rhetorical device at the elite level, therefore, general public dissatisfaction can be expected to continue all the way up to the next election.

Unfortunately for Noda, this prospect of rising public dissatisfaction also raises the possibility of challengers outside the party system entirely…such as the One Osaka movement of the major of Osaka, Toru Hashimoto. After all, untested leaders from outside of politics-as-usual are the most appealing once all parties have lost their importance to the voters.

This essay first appeared in the March 4th issue of APP's Asia Policy Calendar.
at March 08, 2012