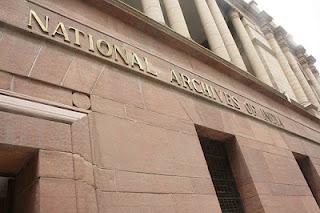 Dinyar Patel, a former APP research assistant is a Ph.D. candidate in history at Harvard University, currently working on a dissertation on Dadabhai Naoroji and early Indian nationalism. Below is the first of a four-part series for the New York Times blog on India called India Ink.

In India, History Literally Rots Away

Nations such as Russia and China destroyed historical documents and artifacts in fits of revolutionary zeal. India has taken a much easier route: it has allowed many priceless papers and other items to slowly disintegrate in, or be stolen from, institutions starved of funding, bereft of proper facilities and trained staff, and lacking proper security.

“They are, to say the least, appalling,” said Mushirul Hasan, who recently became director general of the National Archives of India, in assessing Indian archives and libraries. In 2004, for example, items in Rabindranath Tagore’s collection, including his 1913 Nobel Prize for literature, were pilfered from Vishva Bharati University while security guards were supposedly watching an India-Pakistan cricket match.

The deplorable state of many collections is an open secret amongst scholars but, due to fears of institutional retribution, many refuse to publicly draw attention to the destruction being committed.
There are many reasons for the woeful state of Indian archives and libraries.

“Archives are the lowest priority for any government,” said historian Ramachandra Guha. “They are staffed by government officials on punishment postings rather than trained professionals.” Furthermore, many institutions are housed in substandard structures. Open or broken windows are common, exposing historical documents to humidity and boiling hot temperatures, while allowing in the elements, insects, and the occasional animal. In the fall of 2010, several scholars were startled to find a monkey wandering through the research room of the National Archives. Termites and bookworms also have gutted the holdings of many institutions.

The damage has been significant. At the National Archives, letters penned by Mohandas K. Gandhi, B.R. Ambedkar, Gopalkrishna Gokhale, and other eminent Indian nationalists have suffered from exposure to humid weather, staff negligence and mishandling, and improper preservation methods. Many government records for the 19th and 20th centuries are untraceable. In the words of one of the most senior historians of Indian political history, S.R. Mehrotra, the National Library of India in Kolkata—India’s equivalent of the Library of Congress—is “a national disgrace.”

“Their books are turning into dust,” he said. Archives and libraries have also suffered from political controversy. In 2009, more than 50 Indian historians wrote to Prime Minister Manmohan Singh, accusing the director of Delhi’s prestigious Nehru Memorial Museum and Library, who was supposedly well-connected to the Congress Party, of trapping the institution “in a culture of apathy and mediocrity.”

Mr. Hasan and his staff have been working diligently to reverse decades of damage at the National Archives. The Nehru Library has recently installed a new director. But other institutions have not been as lucky. “The real tragedy is at the state and local archives,” Mr. Guha said.

A number of scholars interviewed singled out the West Bengal State Archives in Kolkata as suffering from especially appalling conditions. According to one historian who asked not to be identified, at least one of the archives’ branches is “dust-covered and fungus-ridden.” He added, “It is literally a health risk to work here,” noting that the archives’ only firefighting equipment — a collection of buckets — was filled with garbage.

Alexander Lee, a doctoral candidate in political science at Stanford University, estimates that white ants, the term used in India for termites, have destroyed about 10 percent of the files at the Kolkata archives. Staff relations have been another sore point. In late 2008, archival staff went on a one-month strike after a scholar from an Ivy League institution made a routine request for document retrieval.
The West Bengal State Archives is currently without a permanent director, but its temporary director, who assumed office six months ago, acknowledged in an interview that certain problems and “pandemonium conditions” exist. He also noted that he has submitted a detailed report to his superiors in the state government, calling for wholesale modernization of facilities.

If there are legions of horror stories, there are also now a few rays of hope. The National Archives has embarked on an ambitious program of expansion and modernization. Other institutions, both private and public, have started similar projects.
at March 25, 2012