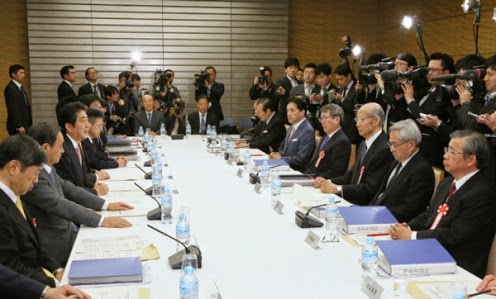 
On 25 February, Japan’s Prime Minister Shinzo Abe convened the first meeting of a new special advisory council, the Commission on a Framework for the 21st Century. The rather ambiguously and grandiosely named council is to meet with him over the coming months, presenting the results of their deliberations on five topics. The prime minister will presumably include the gist of the commission’s recommendations in his Prime Minister’s Statement to be delivered on August 15, the 70th anniversary of Japan’s acceptance of the terms of the Potsdam Declaration, the act ending the combat phase of World War II.

The first topic the commission will address is how Japan should view its and the world’s courses through the 20th century, and what lessons may be drawn from them. Second, what path has Japan trod in the 70 years since the end of World War II, and to what extent have Japan’s pacifism, economic development and contributions to the international community have been appreciated? Third, what path has Japan traveled in regards to reconciliation, first with the US, Australia and Europe but especially with China, South Korea and the rest of Asia? Fourth, what should Japan’s vision for relations in the 21st century be? Finally, what specific measures should Japan undertake 70 years into the post-war period.

The membership of the commission is top notch: 16 of the most influential and recognizable senior commentators and reporters on foreign policy, diplomacy and international image management. The council’s president Taizo Nishimuro is the eldest at 79. He is Chairman of Japan Post and former chairman of both Toshiba Corp and the Tokyo Stock Exchange. His presence provides the council with actual personal memory of the war and its end. Rumiko Seya, the director of the Japan Center for Conflict Prevention, is the youngest at 38. Most of the members of the commission are in their late 60s, meaning that while they have no direct experience of the war, their lives span both Japan’s rise to global economic power and its decades of struggle and relative decline since the collapse of the asset price bubble.

Some reports have incorrectly characterized the commission as composed mostly of academics. Though many of the members currently use academic titles, many are not university scholars. Professionally the commission’s membership is quite varied. Mitsubishi Corporation Chairman Yorihiko Kojima stands at the pinnacle of traditional Japan Inc. corporate culture [Company frequently sued for slave and forced labor claims during the war]. Globis Capital Partners president Yoshito Hori represents Japan’s young, entrepreneurial business class. Yukio Okamoto (for whom the author used to work) and Kunihiko Miyake are former career diplomats. Keiko Iizuka and Takao Yamada are senior journalists, hailing from two news organizations one of which is the most supportive (Yomiuri Shimbun) and the other the most critical (Mainichi Shimbun) of the Abe administration.

Politically, the council can be characterized as moderate-right in orientation. Terumasa Nakanishi of Kyoto University is the one hardliner on the commission. His presence is more than balanced though by the presence and authority of Nishimuro, who serves as the president of the New China-Japan Friendship Committee of the 21st Century. Nishimuro is one of the few members of the elite who have close relations with the leaders of China. Most of the membership of the council would be best called conservative, both in the sense of advocating for greater legalization of the SDF’s use of military force in line with international norms and in wanting those changes to be incremental and not disruptive to the peace in East Asia.

Nishimuro will be a formidable chairman. But the power to shape consensus within the commission will have to be shared with his deputy, Shinichi Kitaoka. Kitaoka, the president of the International University of Japan and the former Japan chair of the Japan–China History Research Committee is a long-time close Abe confidant. He served as deputy chairman of the Advisory Panel on Reconstruction of the Legal Basis for Security, the council that gave the Abe administration the intellectual argument for the constitutionality of Japan engaging in limited collective self-defense operations. He will likely play a highly influential role on the commission.

Most of the members — with the exception of Nishimuro, Iizuka and Seya — have long been part of Prime Minister Abe’s network of advisers. Miyake, a fluent speaker of Arabic, Chinese and English, is often treated by the media as the prime minister’s private spokesman on security and international affairs.

That such talent is so close to the prime minister should be a cause for celebration. But it could well be wasted. Abe has managed in the past to consult with wise persons, weigh their advice and then go on to do what he wanted to do as if he had never talked to anyone at all — his 26 December 2013 visit to Yasukuni Shrine being the most glaring example of his stubborn self-direction.

Furthermore, the sheer mass of talent and attention being brought to bear upon the Prime Minister’s Statement on the 70th Anniversary is many orders of magnitude greater than what is necessary. If Abe wanted to please the US government and satisfy the governments of China and South Korea, all he would have to do is reissue the 1995 Statement of Prime Minister Tomiichi Murayama on the 50th anniversary of the end of World War II. That he has inaugurated a commission to supplement his own statement is evidence he does not intend to follow in the path to reconciliation mapped out by the Murayama Statement.

Unfortunately for Abe, the members of the commission and the citizenry of Japan, the Murayama Statement is the minimum standard expected by the governments of the US, China and South Korea. If, after the deployment of all the experience and knowledge of the commission, Abe fails to hit the expected notes and to transcend the Murayama Statement, the letdown felt by those governments, and the damage done to Japan’s international stature, will be all the greater.

The prudent course for Abe would have been to discourage the build-up of expectations for his statement, to work through the normal diplomatic and bureaucratic channels in its production and forget about the text immediately after reading it. As of 25 February, that humble, cautious path is closed.

Michael Cucek is an Adjunct Fellow at the Institute of Contemporary Asian Studies, Temple University, Japan. He was formerly a senior research analyst at Okamoto Associates Inc, a consulting firm led by commission member Yukio Okamoto. He is an APP member
at March 08, 2015