Happy Science and those who speak out against the Comfort Women 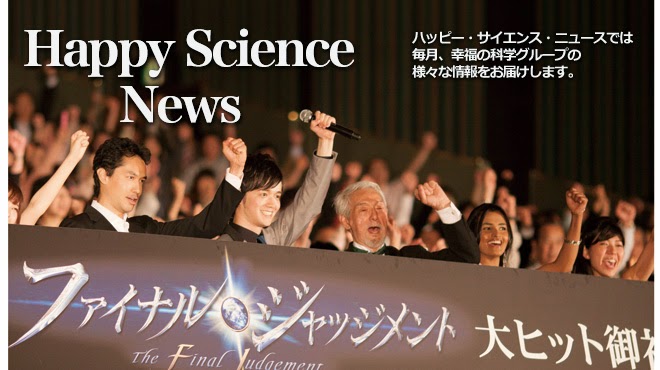 Mystery has always surrounded the upsurge of denier history in Japan. Generally, Japan's "truthers," those who believe Japan's war history and totalitarian state has been wrongly maligned, were on the fringes of society and academia. Politicians either ignored them or kept a quiet distance. Foreign scholars regularly dismissed any "surge" to the right in Japan as illusionary.

Nonetheless, Japan's current leadership can be described as both reactionary and non-apologetic for Japan's war conduct. The "truther" fringe is now mainstream and in power. In part this is a reflection of cultural malaise and insularity. Further the generation that experienced the war is no longer available to temper the views of those who did not. More important, however, is an increase of funding by denier/truther groups to political leaders, many who hail from wealthy families that were insulated from the war as well as profited from it.

One active funder of the LDP is the millennial cult Happy Science. Happy Science group is promoting the "correct view of history," with the belief that it will help strengthen the US-Japan Alliance and eventually lead to the peace in Eastern Asia. They say the atomic bombs were not just and that the Nanjing Massacre is a fabrication. You can find their views on the Comfort Women Issue Here.

This month, for the first time, Happy Science identifies itself publicly as a supporter of the key truther groups that are trying to influence public opinion, including those in California who are suing the City of Glendale to remove the Comfort Women memorial. Chief Cabinet Secretary Suga recently stated at a February 24, 2015 press conference that the Kantei was in touch with organization coordinating the lawsuit.

The following is a annotated translation of the New York City event announcements found on the Nadeshiko Action and homepage. The first version of the flyer on the Nadeshiko website made no mention of Happy Science, but a more recent one, as displayed does. 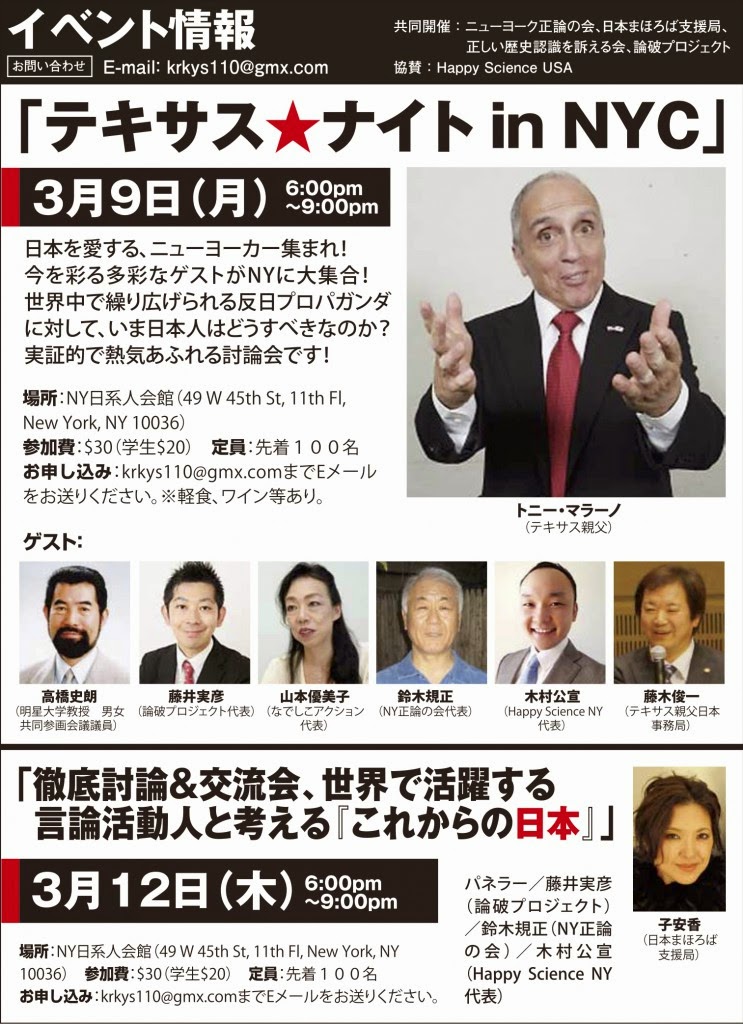 THE 1st TEXAS NIGHT IN NYC:

WHO ARE THE ANTI-JAPANESE

Gather, New Yorkers who love Japan!
This will be an enthusiastic discussion with Tony Marano a.k.a. "Texas Daddy," [2] known for his success in masterfully countering anti-Japanese propaganda, and his colleagues who are fighting with him in Japan and in the U.S. He is author of the column "Thrilling! Texas Daddy" in the Yukan Fuji [Evening Fuji, Fuji-Sankei tabloid].

Speakers [under the photos, from left to right]:

What should the Japanese do against the anti-Japanese propaganda conducted throughout the world? This [event] will be an enthusiastic and demonstrative discussion!

[Press Release Text] The Global Alliance for Historical Truth will hold a Press Conference in connection with the holding of U.N. Commission Meetings of Women’s Status in New York. At this Press Conference, GAHT will release a number of documents which support the thesis that the Comfort Women were NOT sex- slaves as many historians were led to believe. We will not just claiming an antithesis, but will demonstrate it with credible documents gathered from the archives of the United States Government as well as from other reliable sources.

It is a great opportunity for American historians, commentators and reporters who work on Japan to enrich, improve, and/or revise their knowledge about Japan during the war time in the 1930’s and 1940’s.

For improving understanding of the issue, some related events to the current Comfort Women issue will be presented. Presentations will be made by Dr. Koichi Mera, Tony Marano and associates.

Who are Japanese in New York? What does it mean to love Japan? What can we do?

Learn about the anti-Japanese activities and discuss what Japan-loving Japanese can do. Expore concrete ideas for future action based on what we learned in the first discussion event on the March 9th.

Learn about the present situation of anti-Japanese activities in Japan and in the U.S. and the [proper] attitude of the Japanese [i.e. ,what kind of attitude Japan should have] about them from the live voices from the activities being unfolded one after another out there in the field now. Also discuss what we can do in New York.

[1] 木村 公宣  Kiminobu Kimura, representative from Happy Science (Koufuku no Kagaku), a far-right, millennial religious cult. He also identifies as representing this group, 正しい歴史認識を訴える会 [tadashii rekishi-ninshiki wo uttaeru kai] Group to Promote Correct [the/a] Historical View[s]. No information on the Internet. Ad-hoc groups like these tend to be fronts for Happy Science.

[2] テキサス親父 Texas Daddy, Tony Marano, retired telephone company employee from Bronx, New York. Pro-Japan, pro-whaling historical revisionist video blogger who has become an icon in Japanese rightwing groups. Went to France with Rompa Project to campaign against sympathetic Comfort Women manga from South Korea in an international campaign. Reported in Yukan Fuji Here and Here. Traveled with Nadeshiko Action to Geneva to campaign against the Comfort Women at the UN Human Rights Commission and visited the Comfort Women memorial in Glendale, California where he ridiculed the Comfort Women as ugly and joined with Mitsuhiko Fujii and Shun Ferguson in placing a bag over the statue's head.

[3] 高橋史郎  Shiro Takahashi, Conservative education critic who is founder and chairman of The Association of Parental Education or Oyagaku that blames poor parenting for children's learning disabilities. Takahashi was part of the Japanese Society for History Textbook Reform, which successfully campaigned to eliminate mentions of "comfort women" in most Japanese history textbooks. He is an Abe advisor and Abe is chairman of his parliamentary support group. He is a member of the Cabinet's Gender Equality Council.


His cv on the Meisei University website says he has an MA in Education from Waseda University, and was a visiting research fellow at Stanford's Hoover Institute (Feb 1981 - Dec 1982). His books on Amazon include: Japan's traditional child raising revisited through brain science: maldevelopment can be prevented and improved, 2010 [脳科学から見た日本の伝統的子育て―発達障害は予防、改善できる; No-kagaku kara mita nippon no dento-teki kosodate: hattatsu shogai wa yobou, kaizen dekiru] and What America did to Japan during occupation so that Japan shall never be able to rise again, 2014 [日本が二度と立ち上がれないようにアメリカが占領期に行ったこと; Nippon ga nido to tachiagarenai youni amerika ga senryo-ki ni okonatta koto] and [translated title]

[*5] 鈴木規正 Norimasa? [Noritada?] Suzuki, based on web search, it appears that Suzuki is a reiki practitioner living in New York. Seiron is the name of a conservative Japanese monthly magazine, and "Seiron Societies" across Japan began as discussion groups of Seiron readers, and evolved into a political groups supporting far-right agendas.Assumption is that the New York Seiron Society is a group of readers of Seiron in New York.

[*8] 子安 香 Kaori Koyasu is a Japanese-English translator living in New York. A fan of Shigeharu Aoyama, the Japanese TV commentator who popularized the myth of rampant anti-Japanese bullying and harassment in Glendale after the city had installed a Comfort Women memorial statue, Koyasu founded Japan Mahoroba Support Agency (then Japan Mahoroba Support Association) in 2014 to plan Aoyama's lecture in New York City and to bring together Japanese people on the East Coast who share similar views. She spells her first name "Kaoli" instead of a more common "Kaori." "Mahoroba" is an ancient Japanese word describing a far-off land full of bliss and peace.

[9] 目良浩  Koichi  Mera, head of Global Alliance for Historical Truth (GAHT) and Study Group for Japan’s Rebirth. A page in Fujioka's Association for Advancement of Unbiased View of History website describes Mera as having taught at: ハーバード大学、Harvard; 筑波大学、Tsukuba University; 東京大学、Tokyo University; 東京国際大学、Tokyo International University [which is not in Tokyo; established 1965; a national-level cram school says the standard deviation for entrance exam is 49 or so (in other words, below 50)]; 南カリフォルニア大学 University of Southern California. It also notes that Mera was born in Korea 1933 and a graduate of Tokyo University in civil engineering He may have received his Masters and Doctorate are from Harvard. He is a co-author of マッカーサーの呪いから目覚めよ日本人, [Makkahsah no noroi kara mezameyo Nippon-jin;  Awake, Japanese, from the Curse of MacArthur].

LATER: This page was edited and updated. March 15, 2015. The Japanese American Association canceled in embarrassment the meetings to be held in their building. The venue was shifted to a nearby Italian restaurant as noted above. Sankei incorrectly reports that protesters against the meeting were detained.
at March 10, 2015