India and the last jubilee queen 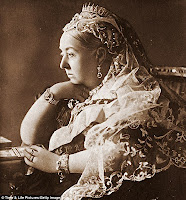 The Hindu of India published today (6/16/12) a piece by former APP intern and current Harvard PhD candidate Dinyar Patel on the last time that a diamond jubilee for a British monarch was celebrated -- 1897 for Queen Victoria -- and the significance of this moment in Indian nationalist history.

Last week's diamond jubilee celebrations in London, marking the 60th anniversary of Queen Elizabeth II's reign on the British throne, garnered relatively limited coverage in the Indian media. While several British South Asians played a prominent role in the festivities, any Indian citizens in attendance were more than likely curious tourists. Amongst the hundreds of boats on the Thames was one carrying the Indian tricolour, which, flying amidst the flags of other Commonwealth nations, provided perhaps the only visible reminder that a British Empire even existed.

What a difference a century makes. As celebrations for Elizabeth continue, it is worthwhile to reflect on the last time that a diamond jubilee was celebrated. That was in 1897, when the aged monarch, Victoria, was also the Kaiser-e-Hind, the Empress of India. Consequently, India played a much bigger role in the jubilee, and the jubilee, in turn, had much greater significance for India. The jubilee was an important moment for India in two ways. Firstly, in an imperial system that placed great weight on public displays of loyalty, it gave various Indian communities an opportunity to jockey for political capital and recognition. Secondly, the jubilee presented a conundrum to Indian nationalists. How best to respond? How should congratulatory messages be balanced with political protest? Ultimately, this question helped widen fissures between emerging moderate and radical factions. By the time the jubilee festivities ended in late 1897, the radicals had proven themselves to be a force with which to be reckoned.

Victoria's diamond jubilee was designed to demonstrate the strength and diversity of the British Empire. The festivities, which like Elizabeth's, occurred under mercurial June skies, featured representatives from across the colonies, ranging from Dayaks from Borneo to Hausas from western Africa. Over forty thousand soldiers from all parts of the empire descended on London. Within India, British administrators sought to recreate a microcosm of this pomp and splendour. They invited delegations to present addresses of loyalty and thanks to the viceroy in the summer capital of Shimla. From across the subcontinent streamed in official representatives of the Hindus of Lahore, Khojas of Bombay, Awadhi taluqdars, and Muslim Bengali women.

Other Indians lost no opportunity for lavish and oftentimes servile demonstrations of their loyalty to the crown. Princes held darbars, fed thousands of poor people, and laid foundation stones for new hospitals and schools to be named after the queen. Prayer meetings were organised in temples and mosques across the country. Residents of Lahore argued over how best to erect a statue of Victoria. Two hundred Parsi priests packed into the confines of Bombay's Wadia Atash Behram in order to deliver a special jashan prayer for the monarch. In Ajmer, dargah custodians pitched in to organise a large fair, while the Bene Israelis of Ahmedabad decided to collectively illuminate their houses. The Jains of Calcutta made what was perhaps the best use of an obligatory message of congratulation: they appealed to Victoria to ban all animal slaughter on her jubilee day. These memorials, darbars, festivals, and prayers were readily picked up by the British press, as well as by European papers in India, in order to reinforce the common belief that loyalty to British rule, alone, united India's diverse and teeming multitudes.

But celebrations and flowery messages barely masked what was otherwise a dark year in Indian history. Famine had swept over much of the north and west, followed soon after by a major plague epidemic. These tragedies were compounded by the Raj's relatively apathetic response to the famine and its imposition of draconian plague regulations. Leaders of the Indian National Congress, an organisation barely 12 years old, were at loggerheads as to how to balance declarations of loyalty with stern condemnation of British policy. At their December 1896 meeting in Calcutta, the Congress passed a feeble resolution congratulating the queen. This sent Henry M. Hyndman, the father of British socialism and an outspoken critic of British rule in India, into a fit of rage. ‘Congratulations for what?' he asked his friend, Dadabhai Naoroji, in January 1897. ‘For having ruined India for two or three generations to come? It is pitiful.'

Hyndman's relationship with Naoroji forms an important part of the story of India's response to the jubilee. Naoroji was then in residence in London, where he had been agitating for Indian political reform. With increasingly horrific accounts of the famine and plague streaming in, Naoroji decided to throw in his lot with Hyndman's Social Democratic Federation (SDF) and launch a series of protests and public meetings across Britain. Both men agreed that a steady drain of wealth and resources by the British were the root causes of India's poverty and misery. They had both spent the last several decades clamouring for more Indian representation in the government.

But now their campaign took a much more radical turn, employing language that did not spare the Kaiser-i-Hind. The silver jubilee, Hyndman told a mass meeting that he organised with Naoroji in February, should be celebrated in a manner befitting a monarch who had been ‘the Empress of Famine and the Queen of Black Death.' Naoroji wrote directly to the queen in the same month, accusing the British of inflicting upon Indians “all the scourges of the world[:] war, pestilence, and famine.” Naoroji and Hyndman continued to hold rallies and demonstrations in the months leading up to the jubilee.

More moderate voices in the Congress also decided to turn the jubilee into a platform for demonstration. G.K. Gokhale, Surendranath Banerjea, Dinsha Wacha, and Subramania Iyer — who had been called to London as witnesses for the Royal Commission on Indian Expenditure (Welby Commission) — launched their own speaking tour around England and Scotland. In May, M.G. Ranade informed Naoroji about a movement afoot to hold “a Congress meeting in London in connexion with the jubilee festivities.” A London Congress, Ranade hoped, would provide an opportunity for Indian political associations to present their petitions directly to the India Office. William Wedderburn, another close British ally of the Congress, urged Ranade to stir up ferment in India for major political reforms. “Unless some clear expression of Indian public opinion is placed before the British public,” he argued, “it will be assumed that a few KCSIs [Knight Commander of the Order of the Star of India] &c to official favorites is all that the people of India desire.”

Ultimately, nothing came of the proposal for a London Congress. Naoroji and Hyndman's joint campaign came to a grinding halt. Naoroji, it appears, got cold feet from Hyndman's exhortations for Indians to rise up in open and violent rebellion against their British masters, and began distancing himself from the SDF. The defining jubilee moment for India happened not in London but in Poona, where several individuals were following a similar line of thought to Hyndman's. On the night of 22 June, as carriages departed jubilee ceremonies held at Ganeshkhind, the governor of Bombay's official Poona residence, two men leaped out of the dark and fatally shot the hated local plague commissioner, W.C. Rand, and a young British lieutenant, Charles Ayerst. The assailants were, of course, the Chapekar brothers, and their action produced shockwaves across the British Empire, completely drowning out, for the moment, the memorials, petitions, and protests of the Congress moderates.

Aside from bringing a bloody end to jubilee ceremonies in India, the Chapekar brothers helped bolster the prominence of an emerging band of extremist and revolutionary nationalists. B.G. Tilak, immediately suspected of complicity in the assassinations, shot to all-India fame in his ensuing trial for sedition. It was only after his sentencing in late 1897 that the honorific title of Lokmanya was bestowed upon him. Hyndman, who grew increasingly disillusioned with Naoroji and the moderates in the Congress, continued to call for revolution in India, defended Tilak in the press, and, in due time, linked up with one of Tilak's young friends, Shyamji Krishna Varma, the founder of India House in London, the premier laboratory for Indian revolutionary activity. It was people like Hyndman, rather than moderate voices such as Wedderburn and A.O. Hume, who served as inspiration for a rising generation of radicals.

For India, therefore, Victoria's diamond jubilee proved to be much more than an opportunity for restrained political protest, leave alone sycophantic memorials, deputations, and displays of loyalty. Instead, 1897 became an important turning point in the nationalist movement. The Poona assassinations raised the spectre of more extremist activity in disaffected regions. By the end of the year, Congress moderates had fully realised the potent threat that radicals — especially charismatic ones such as Tilak — posed to their dominance of the party. With little surprise, therefore, when the Amraoti Congress was held in December 1897, many Congress leaders tried to leverage the Lokmanya's mass appeal through sympathetic resolutions and speeches. Victoria's grand jubilee celebrations, it appears, were already a distant memory.

Dinyar Patel is a Ph.D. candidate in History at Harvard University. Some of the material quoted here will be published in the forthcoming volume, The Grand Old Man of India: Selections from the Dadabhai Naoroji Papers (Oxford University Press), which he is co-editing with S.R. Mehrotra.
at June 16, 2012