From Foreign Policy's The Cable blog: 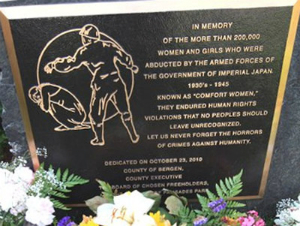 Right-wing Japanese lawmakers and activists have successfully rounded up more than 25,000 signatures for a petition on the White House website asking the Obama administration to force the state of New Jersey to take down a monument dedicated to the memory of "comfort women," the thousands of women kidnapped and raped by Japanese soldiers during World War II.

The Bergen County executive dedicated a small monument in Palisades Park, New Jersey, in late 2010 that included the following inscription:

IN MEMORY OF THE MORE THAN 200,000 WOMEN AND GIRLS WHO WERE ABDUCTED BY THE ARMED FORCES OF THE GOVERNMENT OF IMPERIAL JAPAN. 1930's - 1945
KNOWN AS "COMFORT WOMEN," THEY ENDURED HUMAN RIGHTS VIOLATIONS THAT NO PEOPLES SHOULD LEAVE UNRECOGNIZED. LET US NEVER FORGET THE HORRORS OF CRIMES AGAINST HUMANITY.


Ever since then, officials in the Japanese governmentand and elements of Japanese society that dispute the above facts related to the comfort women have been trying to get the monument, which is located in an area with a large Korean population, taken down.

Now, the Japanese comfort-women deniers have a new tactic -- to go straight to the White House. They started a petition on the White House's official website and have conducted a successful campaign resulting in over 28,000 signatures.

"We petition the Obama administration to: Remove the monument and not to support any international harassment related to this issue against the people of Japan," the petition reads. "False accusations regarding the South Korean comfort women issue have disgraced the people of Japan for decades. Over the past few years it has come to light that many of the original charges were false or completely fabricated."

"Yet despite this new information, the United States continues to lend credence to the original false charges by memorializing the comfort women in a monument in New Jersey and a street name in New York. Not only is this perpetrating historical untruths, but it also leads unnecessary racial conflict and suffering of people of Japanese ancestry," the petition reads. "We strongly request President Obama to remove the monument and not to support any international harassment related to this issue against the people of Japan."

According to the White House website, the administration must give an official response to any petition that receives 25,000 signatures within 30 days of when it was originally posted. The Japanese comfort women petition crossed that threshold more than a week ahead of its June 9 deadline.
The massive amount of signatures came mostly from Japan and due to the direct advocacy of several Japanese lawmakers and former officials. A Japanese resident in the United States, by the name of Yasuko R, created the petition. A supporter can sign for the petition once a day.

The petition was advertised in Japan on the websites of Japanese lawmakers Eriko Yamatani and Keiji Furuya, who were part of one of the delegations that visited New Jersey, which included family members of some of the 13 Japanese citizens that were abducted by North Korea in the 1970s and 1980s.

Nippon Kaigi, a right-wing Japanese organization, supported the petition's call to remove the monument, as did other organizations, including Nippon Kaigi Local Government (Pride of Japan), and The Spirit of Japan Party (Nihon Soshin To), which posted directions on how Japanese citizens could participate in the petition.

Major advocacy for the petition came from Toshio Tamogami, the former Japanese Air Force chief of staff who was fired in 2009 after creating an international incident by writing in an essay that Japan was "not an aggressor nation" in World War II. Tamogami not only called for petition signatures on his website, he gave instructions in Japanese for users to log onto the White House website so they could be part of the effort.

The comfort women issue and Japan's reluctance to come to terms with its wartime actions is still the No. 1 irritant in Japan's relations with its neighbors. For U.S.-based experts that are critical of Japan's handling of the issue, the petition and its underlying argument are doing great damage to Japan's ability to move past the events of the war.

"Is the Japanese right so strung out, so unpopular that it is reduced to these silly international stunts to get attention? Have they become so irrelevant that they have to prop up Comfort Women and Abductees of the North Koreans for attention? They have become as pathetic as their ideas," said Mindy Kotler, the founder of Asia Policy Point, a non-profit organization that does research on Japan.

She said one part of the problem is the failure of the U.S. government to connect its human rights and women's rights policies to Japan.

"We have built and demanded to build institutions around the world to address war crimes and human rights. In regard to historical war crimes, we have a bureau in the State Department on the Holocaust* and even appointed an ambassador in the late 1990s to deal with German and Austrian war crimes," she said. "But we have done nothing that addresses the lingering, if not festering problems of Japan's reluctantly acknowledged war crimes. It eats away at our alliances and undermines our ‘shared values.'"

The White House petition response should be posted "in a timely manner," according to the website.

*The Office of the Special Envoy for Holocaust Issues, Douglas Davidson


The Office seeks to bring a measure of justice and assistance to Holocaust victims and their families and to create an infrastructure to assure that the Holocaust is remembered properly and accurately. This is an important issue in our bilateral relations with countries of central and eastern Europe and with the state of Israel.