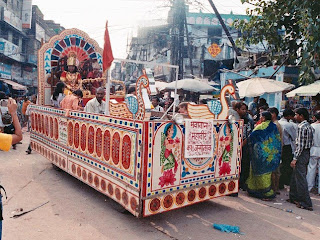 Most in Asia remember December 13th as the beginning of the Nanjing Massacre in 1937 by Imperial Japanese forces. Further west, this date marks the founding of New Delhi in 1911. Former APP research assistant Dinyar Patel who is currently a Fulbright Scholar based in Mumbai while working on his Ph.D. in the Department of History at Harvard University reflected on this anniversary in The New York Times blog, India Ink.
December 12, 2011, 6:23 am

Few cities of recent vintage have a history as complicated and contested as New Delhi, which turned 100 on Monday. Now the seat of the world’s largest democracy, New Delhi began in 1911 as a grand imperial showpiece meant to stand for eternal British rule over the Indian subcontinent. But during its two decades of construction New Delhi became the stage upon which Indians gained increasing political advantage over a crumbling Raj.

New Delhi literally began as an imperial edict. In December 1911, King George V traveled to Delhi in order to be crowned emperor of India at an elaborate durbar, or gathering: he was the first reigning British monarch to step foot on Indian soil. After several days of ceremonies at a temporary city consisting of some 40,000 tents and featuring its own railway system, King George V offered two boons to his subjects: First, he revoked the partition of Bengal, an act that had unleashed violent anti-British agitation. Second, he announced the creation of a new city in the vicinity of Delhi to replace Calcutta as the imperial capital. The city, George hoped, would be a fusion of Indian and European architecture, according to a letter from his viceroy to one of his colleagues.

Herbert Baker and Edwin Lutyens, the two architects appointed to design much of the city, seemed to be curious choices for such a venture. Baker worked in South Africa, where he had become a disciple of the arch-imperialist Cecil Rhodes. Lutyens, who previously had mostly designed English country houses, was known for his occasional prejudiced outbursts against India. In a letter to his wife, for example, Lutyens described Indian architecture as “essentially the building style of children.” Even the Taj Mahal, he complained, was “small but very costly beer.” Both men reveled in their assignment to create a monument to imperialism. “Hurrah for despotism!” Baker wrote to Lutyens. “On the day you sail [to India] you should feel like Alexander when he crossed the Hellespont to conquer Asia.”
Arthur Gill/British Architectural LibraryViceroy’s House in Delhi, in this undated file photo.

In spite of their prejudices, Lutyens and Baker managed to create a remarkable assemblage at New Delhi that melded European and Indian architecture into an innovative whole. Lutyens’ Viceroy’s House had a dome modeled after the Buddhist stupa at Sanchi, commissioned in the third century B.C. by Ashoka. In order to battle Delhi’s blazing summer heat, Lutyens adapted Mughal techniques for indoor cooling by installing rooftop fountains that cascaded into the interior of buildings. Baker laced his classical Secretariat blocks with Mughal-style domes, cupolas and cornices. For other elements of their city plan, they took cues from Washington, Paris and Canberra in addition to Fatehpur Sikri and Jaipur.

New Delhi inspired a lively architectural debate amongst the uppermost echelons of British Indian society. But for Indians themselves, it became the object of resentment. Parts of the new city seemed completely antithetical to the Raj’s promises to Indian nationalists of gradual political reform. Above the entrances to his Secretariats, for example, Baker engraved a rather patronizing phrase: “Liberty will not descend to a people, A people must raise themselves to liberty, It is a blessing that must be earned before it can be enjoyed.” The engraving remains there today. Lutyens’ Viceroy’s House covered a greater area than Versailles and had an army of attendants, including several whose job was to shoo away pigeons. New Delhi emerged as a rigidly ordered and segregated city, with spacious bungalows for British officers in the south and poorly ventilated tenements for Indian peons in the north.

Indians protested the cost and extravagance of the new capital in the legislative assembly, the feeble predecessor to the Indian Parliament. Contrasting New Delhi’s opulence with the grinding poverty of the rest of the country, one legislator in 1921 complained that, “we have no right to feed our aesthetic sentiments at the expense of the poor tax-payers of India. And I cannot find any justification whatsoever why we should think that we should be better housed … when we really know that the country is actually starving and suffering.” In 1927, the chamber erupted in a chorus of “Shame, Shame” when British officials increased the budget for furnishing the Viceroy’s House.

Armed with limited budgetary powers, the assembly began chipping away at New Delhi’s construction budget and helped organize two committees to investigate ways for further reductions. As a result, many elements of New Delhi’s plan, such as extending the city’s processional boulevard, now Rajpath, to the Yamuna River, were discarded and remain unfinished even today. Leading Indian nationalists took a harder line against the city. Jawaharlal Nehru mocked the Viceroy’s House as the “chief temple where the High Priest officiated” and Mahatma Gandhi is rumored to have wanted to turn it into a hospital.

When New Delhi was officially inaugurated in 1931, it was a fundamentally incomplete city, littered with vacant plots and unfinished palaces. Due to the outrage over the cost of construction, British officials kept inaugural ceremonies to a bare minimum, something that was in marked contrast to the 1911 durbar. The power dynamics in the new city were starting to shift. At its center was a new Council House built for India’s expanded legislative assembly. As the Raj was forced to make further political concessions to the nationalists, the Council House, today home to India’s Parliament, became a hub of the city’s political life at the expense of the Viceroy’s House.

Ultimately, New Delhi served as the capital of the Raj for only 16 years before India became independent in 1947. Lutyens’ Viceroy’s House — decorated with stone bells that were meant never to ring and thereby never to herald the end of empire — became Rashtrapati Bhavan, the home of India’s ceremonial president. Colonial-era statues were dumped at the neglected durbar site. Reminders of the Raj still abound at every turn in modern New Delhi, but the Indian republic has managed to put its own stamp on the capital. At the eastern end of Rajpath lies an empty pavilion that once housed the marble statue of George V. It serves as a fitting symbol for an ancient civilization very much still in the process of refashioning itself as a democratic, egalitarian nation-state.
at December 17, 2011