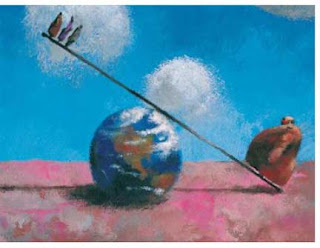 Remarks by the President on the Economy in Osawatomie, Kansas, 12/6/11
I’m here in Kansas to reaffirm my deep conviction that we’re greater together than we are on our own. I believe that this country succeeds when everyone gets a fair shot, when everyone does their fair share, when everyone plays by the same rules. (Applause.) These aren’t Democratic values or Republican values. These aren’t 1 percent values or 99 percent values. They’re American values. And we have to reclaim them.
....
We simply cannot return to this brand of “you’re on your own” economics if we’re serious about rebuilding the middle class in this country. (Applause.) We know that it doesn’t result in a strong economy. It results in an economy that invests too little in its people and in its future. We know it doesn’t result in a prosperity that trickles down. It results in a prosperity that’s enjoyed by fewer and fewer of our citizens.
....
Inequality also distorts our democracy. It gives an outsized voice to the few who can afford high-priced lobbyists and unlimited campaign contributions, and it runs the risk of selling out our democracy to the highest bidder. (Applause.) It leaves everyone else rightly suspicious that the system in Washington is rigged against them, that our elected representatives aren’t looking out for the interests of most Americans.

But there’s an even more fundamental issue at stake. This kind of gaping inequality gives lie to the promise that’s at the very heart of America: that this is a place where you can make it if you try. We tell people -- we tell our kids -- that in this country, even if you’re born with nothing, work hard and you can get into the middle class. We tell them that your children will have a chance to do even better than you do. That’s why immigrants from around the world historically have flocked to our shores.

Semi-annual again downgrades next year's growth forecasts for emerging East Asia, warning of the impact of the European debt crisis. It now expects 14 economies in the region to grow by 7.2% in 2012, instead of the 7.5% it estimated in September. The ADB has maintained its forecast for 2011 at 7.5%.

Growth in the PRC is likely to moderate even as domestic demand continues to rise, and is now forecast at 8.8% in 2012 after expanding 9.3% this year. In September, ADB had forecast growth of 9.1% in 2012.
The newly industrialized economies of Hong Kong, China; the Republic of Korea; Singapore; and Taipei, China, will see slower growth both this year and next year in large part because they are more dependent on international trade than their neighbors. This leaves them highly vulnerable to an economic contraction in Europe and the US.

ASEAN’s economies will also grow more slowly than previously expected. Thailand, hit particularly hard by the recent floods, should recover from supply disruptions next year. ADB now sees Thailand’s economy growing a smaller 2.0% this year, but is maintaining its 4.5% growth forecast for 2012.

Japan’s economy is forecast to bounce back from the effects of the recent natural disasters as supply chains are rebuilt, but the strong yen will likely hurt exports while domestic demand is likely to remain weak. As such, ADB continues to forecast a contraction of 0.5% this year followed by a 2.5% expansion next year.
Report examines if Asia can weather another economic downturn in the West. The prognosis is guarded.


Divided We Stand: Why Inequality Keeps Rising, OECD, 12/5/11.
The gap between rich and poor has grown in most of the world's major economies, and now stands at its highest level in 30 years. The gap between the income of the richest 10 percent and the poorest 10 percent has risen in nearly all OECD member countries. The biggest gap is in Chile and Mexico, where the richest make 25 times more than the poorest. The gap is 14-to-1 in the United States, Turkey and Israel; 10-to-1 in Japan, South Korea and Britain; and 6-to-1 in Germany, Denmark and Sweden.
OECD Secretary-General Angel Gurria said the study shows that "the social contract is starting to unravel in many countries." Gurria said the study shows that the benefits of economic growth in countries do not automatically trickle down to the poor. The OECD attributed the rising income gaps to several factors, including changes in tax and benefits policies and differences in education and training.
at December 06, 2011