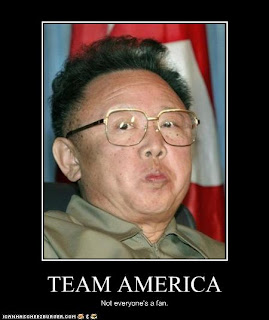 North Korean leader Kim Jong-il reportedly died on December 17th. His death was announced on Monday morning (Asian time) November 19. South Korea President Lee Myun-bak was in Japan and it just so happens to also be his birthday.

Washington's think tankers have also sprung into actions with comments, essays, and programs. However, the only certainty is uncertainty. Japan's Foreign Ministry, however, seems to have a handle on "it." As do the reporters at The Onion.

APP members have been among the first to comment with Kim Jong-un’s Shaky Hold on Power in North Korea by Richard Bush at Brookings and Morning Bell: The Death of Kim Jong-il by Bruce Klingner at Heritage.

North Korea Economy Watch blog is your best source for aggregating all the information and analysis of Kim's death.

The Wall Street Journal put together an excellent list of The Best of Kim Jong-Il on the Web. Not to be missed is the ad parody of Kim on eHarmony.


Ironically, Kim Jong Il’s death may make Korea the land of the morning calm for at least a year, during which political transitions will also occur in China, South Korea, Japan, Russia, and the United States... Unless Kim Jong Un throws the nuclear strategy out the window and starts again, the outlines of the engagement agenda are already clear—send the North Koreans energy and food aid to meet both short-term humanitarian and medium/long-term development needs, help them build a safe small light water reactor, and bring them into an international enrichment consortium that would lead them to reveal the sum total of their enrichment program.

We will try to list here the various Washington programs on the Dear Leader's death as they come in. Please return for updates:

He will be missed.