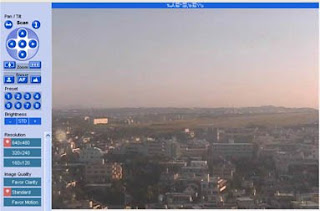 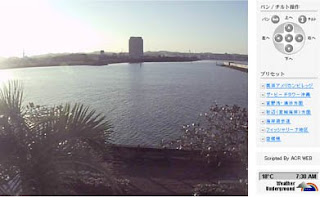 There are two 24-hour live webcams showing views of American military installations on Okinawa. One has been operational since 2004.
The locations of the two webcams are Kakazu Takadai Park, Ginowan, and Elegante Miyoshi apartment building, Naha, and the bases they overlook are Marine Corps Air Station (MCAS) Futenma and Naha US Naval Port, respectively.
A map listing of these and other area webcams was found on Web Camera Map (Japanese only). Both have a maximum of 640x480 resolution.

Ginowan city government initiated the live webcam service with views of Futenma in December 2004. From April 2008 to March 2009 it was the 9th most viewed webpage on the city’s website. It is also listed as a proposed budgetary item to enhance following a survey conducted in middle of last year according to the city’s “Electronic Municipality Implementation Plan” (July 2009, Japanese only).

Naha is the largest city in Okinawa and home to 13 live webcams according to Web Camera Map. Only one of these overlooks the US Naval Port and was “re-started” in April 2009. No details could be found about the camera's operation prior to 2009. It is hosted on a private website, Nirakanai.com, along with links to other webcams around Okinawa.