Maybe Hatoyama is down for the count 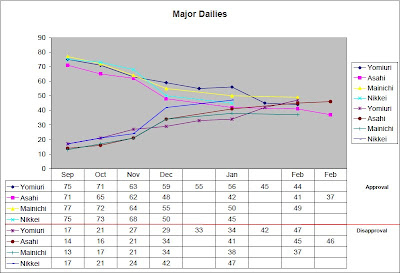 Here at Asia Policy Point we like to entertain a number of perspectives and keep the intellectual dialogue fresh. Thus, not all the scholars associated with APP share the optimistic assessment of the DPJ's future as the authors of the last blogpost. Our Senior Fellow Dr. William Brooks is reading the polls and finds the DPJ coming up short.

Jiji's February poll shows the Hatoyama Cabinet support rate in a free fall, plummeting 11.4 points in a month to 35%. The full impact of the money scandal centered on DPJ Secretary General Ozawa is now being felt. Ozawa seems oblivious to calls to fully explain to the Diet and the public his role in the illegal political contribution scandal. Already three of his former aides have been indicted. Nevertheless he has vowed to remain in his post and work for his party’s win in this summer’s Upper House election.

There are press rumors he may gracefully exit before the election, but the damage may have already been done. The Jiji poll also shows that the cabinet’s non-support rate rose 12.3 points to 44%. This is a pattern that resembles the decline and fall of the previous three governments led by LDP prime ministers. Now, 85% of the Japanese public are distrustful of Ozawa’s explanations so far, with 72% wanting him to resign his post.

The same Jiji poll also shows DPJ support eroding, having slipped 4 points to 22.8% -- heading in the direction of the LDP, which inched up 1.5 points to 14.6%. Voters supporting no party form a majority, 53%, making this summer’s election hard to predict. Only 24% of the public say they will vote DPJ in the election, a drop of 6.6 points, but the LDP is not the immediate beneficiary, with only 18% planning to vote for that party. The party’s recent boycott, now ended, of crucial Diet deliberations did not serve to endear it with the public.

More distressing for the DPJ is the result of a February independent poll showing the Hatoyama Cabinet’s non-support rate at 57%, double the figure of four months ago. Only last October, Hatoyama’s popularity in that poll was a heady 74.1%. Iit has now dropped to 42.9%. What is interesting in this opinion survey, like Jiji’s, is the low party-support rates for both the DPJ (26%) and the LDP (13%) – again demonstrating that a majority of Japanese have now abandoned both parties to join the ranks of the floating voters.

Those voters for the most part may stay home in July, but if they turn out in droves to register their disappointment with the party in power, a tactic that had hurt the LDP in past Upper House elections, the DPJ could very well lose its majority in that chamber. The party is obviously aware of its predicament but remains unable to address it. There are rumors that Party envoys have sounded out the New Komeito, once the LDP’s long-standing coalition partner, to see if it would consider the same with the DPJ, thus returning to its centrist roots.

Above is a chart of surveys done by major dailies on Hatoyama Cabinet support rates. As they said in Ghostbusters, "don't cross the streams." It would be bad.