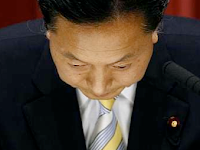 Not a day goes by without the words "scandal" and "Ichiro Ozawa" making the headlines in Japan.
Although three former close aides of the Democratic Party of Japan Secretary General have been arrested and one already indicted over political funding violations, Ozawa maintains his innocence. After questioning him twice, Tokyo prosecutors have concluded that there is insufficient evidence to indict him.
But this does not leave the DPJ kingmaker off the hook, even the DPJ’s coalition partner, the Social Democratic Party, is calling for him to testify before the Diet and fully explain his role over such matters as his explanation that the $4 million dollars entrusted to an aide for land purchases came from an acquaintance who has since died.

Ozawa adamantly refuses to resign, insisting that he must stay on to fulfill his party’s destiny of winning big in the Upper House election this July. Outside perhaps of Prime Minister Yukio Hatoyama (pictured) and a small coterie of Ozawa associates in the DPJ, no one seems willing to repeat his denials within earshot of the public. Liberal Democratic Party President Tanigaki, acting these days as chief inquisitor in repeatedly demanding a full explanation in the Diet, calls the government the “Ozawa Cabinet” - a jibe at the de jure prime minister.

Ozawa told the press February 4, “I will stay on in my post and work to recover the people’s trust.” The public, however, is not willing to cut him any slack, as seen in the business daily Nikkei’s opinion poll on Jan. 28, in which 65% said he should resign. The same poll found 83% wanted Ozawa to explain all of the allegations.
But Ozawa's woes are also Hatoyama's - 69% criticize his handling of the Ozawa issue. Disapproval of Hatoyama’s Cabinet rose five points to 47%, while the support rate slipped five to 44%. In the last four months, Hatoyama’s support has plummeted 30 points in the Nikkei survey. Why? “Lack of leadership” according to 59%.
The daily ordeal of grilling by the opposition, and even coalition lawmakers, in the Diet is taking its toll on Hatoyama. The press is depicting Hatoyama as losing his cool – though he has tried to keep his emotionless expression in response to sharp questioning.
But more is to come. With Ozawa’s former private secretary turned DPJ lawmaker Ishikawa now indicted, the Diet is moving to force him to resign his Diet seat. This would put even more pressure on Ozawa to take political responsibility and resign. And all this before new allegations of yet another money scandal involving Ozawa have played out in the press.
And it could get still worse for the DPJ. Assuming that Ishikawa resigns before March 15, there would be a by-election to fill his Diet seat on April 25. If the DPJ candidate lost, it would have serious consequences for the party's electability nationally. Some in the party reportedly are already questioning whether the prime minister is a liability going into the summer election, according to press reports.

The bottom line? The swing voters who make up at least a third of the national electorate are departing the DPJ in droves. These are the voters who put the LDP prime minister Junichiro Koizumi in power. It's not unthinkable that an unpopular prime minister and scandal-ridden kingmaker could find an altogether different destiny from the one they had imagined come July.
Image from here.
Dr William Brooks
APP Senior Fellow
at February 05, 2010