The U.S and North Korea: Headed To War or Dialogue? 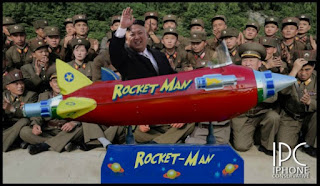 Governments around the globe, from Berlin to Beijing, and not least of all, in Pyongyang, have been desperately trying to figure out what the United States is going to do in North Korea. Is it headed for war or for dialogue?

Senior Japanese officials, according to multiple sources, decided to ignore the twitter feed of President Donald Trump in trying to discern American policy. Instead they rely on the words, in private and public, of the responsible figures in his administration – Defense Secretary James Mattis first of all, followed by National Security Advisor Lt. General H.R.McMaster and Secretary of State Rex Tillerson.

The events of the past week have demonstrated how difficult it is to actually operate on that basis. Secretary Tillerson garnered headlines when he told reporters in Beijing, after meetings with senior Chinese officials, that the U.S. was in direct contact with North Korea through multiple channels.

A day later, the President tweeted out that Tillerson was “wasting his time trying to negotiate with Little Rocket Man” and that he should “save your energy, Rex, we’ll do what has to be done,” read as yet another threat to take military action.

Who to believe? In reality, the Trump administration has been pursuing a policy that combines escalating sanctions and pressures on the North Korean regime, including consciously evoking threats of military action, at the same time that has engaged the Pyongyang regime in attempts at dialogue.

Tillerson’s admission of this in Beijing was not a surprise to those closely following North Korea policy – it was meant more for the purpose of giving Xi Jinping something to offer the upcoming Communist Party gathering as evidence of his ‘success’ in getting the Americans to engage in serious dialogue with North Korea.

Contact with North Korea has been ongoing for months, mainly by the State Department’s Amb Joseph Yun, the Special Representative for North Korea policy, through the North Korean mission to the United Nations. Amb Yun, according to people familiar with his thinking, has been looking for openings to hold serious talks with Pyongyang.

In May, on the sidelines of a non-official dialogue held in Norway, Yun met with Choe Son-hui, the director of the North American department in the North Korean Foreign Ministry. Yun had hoped to open a broader discussion but Tillerson and the White House limited him to first dealing with the fate of several Americans held captive in the north. Yun traveled to Pyongyang which led to the release of the student Otto Warmbier the following month, though he died within days of his return to the U.S.

Early in September, a similar meeting took place in Switzerland, attended by experts from the U.S., South Korea, Japan and elsewhere and by a North Korean delegation led by Choe Kang Il, the deputy director of the North American division. For the North Koreans it was more of a fact-finding effort, trying to understand where U.S. policy was headed, and delivering a rather tough message about their willingness to talk.

“The North Koreans are also interested in talks and they know the need for talks,” one participant told me. “But they want to make sure that U.S. hostilities toward North Korea are stopped for talks to be resumed.”

For Pyongyang, the participant said, this means the U.S. halting the threat of use of nuclear weapons, dropping its sanctions policy, and ending U.S. military exercises it regards as threatening, particularly those aimed at operations to target the North Korean leadership. Any discussion based on the goal of denuclearization, he said, is not on the current Pyongyang agenda.

Trump senior officials have repeatedly signaled, in some detail, their readiness to talk but only on the basis of the previous commitments to denuclearization. In a rare semi-public appearance on September 25 at the Institute of the Study of War, National Security advisor McMaster acknowledged there was no quick military solution – “there’s not a precision strike that solves the problem,” he said, reported DefenseOne.

Talks are possible, he went on, but not if Pyongyang continues to develop its missile and nuclear weapons capability, indicating that a halt in testing was a first goal. He further described confidence-building steps the North Koreans could take – though he said they were not preconditions for talks – including accepting inspections of its nuclear facilities and a declaration of its eventual willingness to give up its nuclear weapons, Bloomberg reported.

Those steps are already considered unacceptable to Pyongyang. “The problem is not sitting down for talks,” observes David Straub, currently the Sejong-LS Fellow at Seoul’s influential Sejong Institute. “The problem is what you talk about.”

Straub, a 30-year veteran of the U.S. State Department who participated in the 6-party negotiations with North Korea, is deeply skeptical about the prospects for talks, concerned that they will inevitably lead to defacto acceptance of North Korea’s status as a nuclear power, deeply undermining the U.S. alliances with South Korea and Japan, not mention its broader non-proliferation policy toward Iran and other aspirants for nuclear weapons status. “I don’t believe any talks with North Korea that I can imagine would be of any use.”

A former senior U.S. government official with long experience with North Korea shares these concerns. “I’m concerned that, based on where we are now, the only thing worse than not having a dialogue is having a dialogue, since it would probably be about the things that the North Koreans want to talk about, and definitely not about denuclearization,” he told me. “The North Koreans are deeply dug in and determined to remain a nuclear-weapon state, at almost all costs.”

Such experienced North Korea policy hands welcome the Trump administration’s efforts to vastly tighten sanctions, particularly the flow of money through China, Russia and other venues, as part of a broader strategy of containment and deterrence. But it requires consistency and patience to carry out.

“I’m not sure this U.S. Administration has the bandwidth, the moral authority, the international respect, and the belief in U.S. international leadership necessary to effectively pursue this course,” says the former senior U.S. government official. “At the end of the day, they will either blink or go to war. And if they blink, they will lose credibility and scare the hell out of our allies. And since allies mean little to this President, I fear that is what he may do.”

The fear of war, triggered by miscalculation and misreading, fed by the rhetoric from both leaders, is widespread in Washington, and beyond, including in Tokyo. Among the allies, however, there are some differences. The South Korean government of Moon Jae-in would likely welcome any talks as it would confirm its own desire for engagement with Pyongyang. “Moon wouldn’t worry about what the conditions were,” says a close Western observer of South Korea.

Prime Minister Shinzo Abe, who has staked his own re-election campaign on a tough stance toward North Korea, would likely find any move toward talks, particularly in the short term, a problem. But Japan cannot afford to publicly take a stance different than the Trump administration.

The question at hand is whether there is any way to get around the contradictory conditions from both sides. “If this is the core issue,” says the former senior U.S. official, “then the solution is to arrange a dialogue with no pre-set agenda and with the only ground rule being that each side is free to raise any issue it wishes.”

An additional idea would be to carry out initial talks on a military to military basis, in the form of a discussion of “confidence building measures,” so-called CBMs, an instrument used for dialogue in the Cold War. These could deal with measures such as reducing military exercises on both sides, or procedures to declare tests of missiles.

According to the participant in the Swiss talks, this idea was raised with the North Koreans and elicited a positive response. On the U.S. side, this would put management of the dialogue firmly in the hands of the military, led by Secretary Mattis, working closely with McMaster and the NSC. Given the weak leadership from an understaffed State Department, this may be preferable to the Trump administration.

But this is a difficult and narrow road to talks. “The North Koreans have never been willing to let us talk to their military,” notes Straub, though a senior North Korean military leader did visit Washington in the closing days of the Clinton administration.

An intriguing route to dialogue may lie via Moscow. The senior North Korean diplomat who heads the North American division, Choe, who was the interlocutor with Amb Yun, spent extended hours last week in Moscow. Sources familiar with Russian thinking point out that the North Koreans probably find it easier to talk to them than to the Chinese, though Moscow is unlikely to act without consulting Beijing. The Russian channel may pose difficulties for Trump officials, however, due to the scrutiny of their ties to Russia these days.

There is considerable momentum in Washington policy circles in favor of talks with North Korea, most of all to avert conflict that arises out of lack of communication. Despite Trump’s tweets, the U.S. government has been pressuring non-government groups that have hosted dialogues with the North Koreans to hold off in order to maximize the prospects for official talks, a well-informed source told me.

But before these glimmers of an opening can have a chance, Pyongyang will have to desist from further provocative demonstrations of its nuclear prowess. South Korean intelligence officials predict some kind of missile test or similar action to coincide with two upcoming North Korean anniversaries, on October 10 and 18th. A U.S. aircraft carrier is being moved into position in the Sea of Japan in time for possible tests.

If the past is a guide, Kim Jong Un, with a little push from Donald Trump, will sabotage the fledgling efforts at diplomacy.
at October 06, 2017