Human Trafficking in the Party Platforms - Too similar 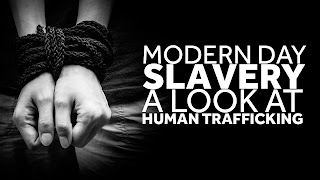 Combatting human trafficking is generally a bi-partisan political issue. It is considered such a serious crime that both the Republican and Democratic Party platforms devote a section each to how they address this international problem.

Human trafficking or modern day slavery is a dark business that claims more than 20 million victims worldwide, garners the perpetrators profits of over $150 billion annually, and is one of the fastest growing criminal enterprises in the United States. In 2000, both the UN General Assembly and the U.S. Government adopted protocols to monitor and combat this abuse of human rights.

On October 24th, U.S. Secretary of State John Kerry chaired the second meeting this year (the first January 6th) of the President’s Interagency Task Force to Monitor and Combat Trafficking inPersons (PITF) at the White House. The gathering, which was supposed to be held only once a year, is the fourth during Secretary Kerry’s tenure as Chair and the seventh of the Obama Administration. It serves as an opportunity to coordinate government-wide efforts and discuss new initiatives. And it is a platform to promote and distinguish the Administration's good work.

Secretary Kerry summed up the critical importance of Administration policy

Human trafficking is one of the few issues that we face, all of us, on a day-to-day basis in governing where there’s no – unlike a lot of other issues that are clouded by nuance or a kind of complexity – this is not complex except in the execution of the things we know we have to achieve. And there certainly is no nuance whatsoever. There’s a moral clarity here that’s as firm as you could have on any kind of issue. And needless to say, the notion of modern-day slavery is one that touches everybody’s conscience and it is one of just fundamental, basic human decency....

This not simply a question of right versus wrong. It’s in our strategic interest as well to ensure that this fight is a priority of our foreign policy. And the fact is that human trafficking is a multi-billion-dollar criminal enterprise. It’s assault on human rights and is – it’s a threat to global stability. It undermines the rule of law, it breeds corruption, it spreads disease, it widens the gap between the haves and the have-nots, and it tears whole families apart.

There is little in Kerry's remarks that would be disputed by the Republican opposition. The issue is so bi-partisan that the 2016 Democratic Party platform prose on human trafficking is nearly identical to the prose in the 2012 Republican platform.

In the 2012 Republican Party Platform in the Chapter on "American Exceptionalism" the subsection on Combatting Human Trafficking (page 46) includes the following:

We will use the full force of the law against those who engage in modern-day forms of slavery, including the commercial sexual exploitation of children and the forced labor of men, women, and children. Building on the accomplishments of the last Republican Administration in implementing the Trafficking Victims Protection Act of 2000, we call for increased diplomatic efforts with foreign governments to root out complicit public officials who facilitate or perpetrate this evil.

The 2016 Democratic Platform in the Chapter on “Protect our Values,” has a subsection on Trafficking and Modern Slavery (page 46) composed simply of the following paragraph:

We will use the full force of the law against those who engage in modern-day forms of slavery, including the commercial sexual exploitation of children and the forced labor of men, women, and children. Building on the accomplishments of the Victims of Trafficking and Violence Protection Act of 2000, we call for increased diplomatic efforts with foreign governments to root out complicit public officials who facilitate or perpetrate this evil.

Missing is merely the obvious "of the last Republican Administration in implementing."

It specifically notes "The goal of our domestic antitrafficking programs should be the rescue and safe return of victims to their homes, not creating a longterm dependency upon public support." Most important, the 2016 platform no longer contains the following:

We affirm our country’s historic tradition of welcoming refugees from troubled lands. In some cases, they are people who stood with us during dangerous times, and they have first call on our hospitality.