Can Asia survive the shock of Trump-ageddon? 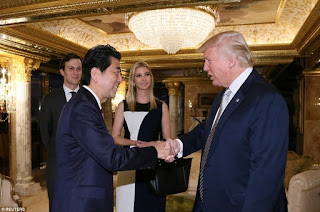 Or will he be pragmatic?

Donald Trump made some outlandish promises to win the U.S. presidential election. America and the world will survive, but he poses significant risks to the global economy and the peace that has prevailed in East Asia since 1979. His denial of global warming also means America will provide no leadership on climate change and the world will likely pay a high price for his ignorance.

If he does rip up the North American Free Trade Agreement and start a trade war with China, Trump will spark a global financial meltdown. Post-Brexit markets are already jittery, especially given concerns about the troubled state of China’s economy. In this context, Trump’s “America first” strategy (aka “Wrexit”) could have catastrophic consequences.

His transition team is currently in damage-control mode as they try to walk back some of his more unsettling proposals. Having proved the media and pollsters wrong about the election, can Trump prove the critics wrong about his leadership qualities and policy agenda?

He has a deep hole to climb out of because of his hatemongering. This is the reason why most Americans did not vote for him: he pandered to the primordial impulses that lurk in the dark soul of America, playing people like a revivalist promising redemption and a return to glory. But he showed us he is a callow charlatan and shyster carrying a huge chip on his shoulder. And worse, he is easily provoked into mistakes. Trump imperils the world with his vengeful short fuse.

Now his advisers are trying to convince us to ignore all that campaign nastiness and hope he won’t be as bad as we fear. Given Trump can’t surprise on the downside, can he pull off some positive surprises? Perhaps he will accept adult supervision and we will avoid the nightmare of Loony Donald doing what he promised and sparking a global economic meltdown, but that means Lying Donald would betray his supporters by not delivering what he promised — and probably blaming everyone but himself.

Asian leaders are scrambling to respond to President-elect Trump. Prime Minister Shinzo Abe has pinned his legacy on strengthening security ties with the U.S. and rejuvenating the Japanese economy through his Abenomics strategy. But Abenomics has been a dismal failure, and the Trans-Pacific Partnership (TPP) free trade accord represented the last hope for meaningful structural reform in Japan — the “third arrow” of Abe’s three-pronged strategy. Trump wants no part of TPP so there will be no final arrow.

Abe also saw TPP as part of a geopolitical strategy to keep the U.S. engaged in Asia as a counterweight to China. That is also why he signed the U.S.-Japan Defense Guidelines in 2015 and rammed unpopular security legislation through the Diet to ease constitutional restrictions on Japan’s armed forces. Abe likely sees Trump’s isolationist and protectionist impulses as a menace to everything he has tried to accomplish. Yet Abe has terrible chemistry with U.S. President Barack Obama, so he is seeking closer personal ties with Trump by fawning on him. He understands that the president-elect is a brittle creature, desperate for praise and attention, who suffers from zero credibility on the world stage. Peevish Trump rewards friends and lashes out against those who disdain him.

Thus, a worried Abe rushed to meet Trump on Nov. 17 to seek reassurance that the new president remains committed to the alliance. Abe did Trump a great favor by pronouncing him trustworthy. It’s likely he reiterated that Japan is not a free-rider on U.S. defense — it pays close to $2 billion a year for hosting U.S. military bases, about 75 percent of all costs, considerably more than in South Korea (40 percent) and Germany (33 percent). But if Trump has his way, Japan will have to up the ante.

Typhoon Trump puts wind into the sails of Abe’s agenda for constitutional revision: The U.S. security umbrella that helped make the war-renouncing Article 9 possible is looking ragged. In 2015, a Genron poll indicated that only 9.2 percent of Japanese regard the U.S. as a “very reliable” ally, but judging from the Japanese dismay that greeted Trump’s victory, that figure has no doubt declined. Does the U.S. have Japan’s back? A post-election NHK poll revealed only 5 percent of Japanese think U.S. relations will improve under Trump.

Trump’s cavalier remarks have done a great favor to China by sowing seeds of doubt about U.S. intentions and resolve in Asia. However, this is destabilizing and increases the chances of a miscalculation in the region. The peace that has prevailed in Asia since 1979 is at risk, not only because security arrangements are being recalibrated, but also because Trump may trigger major economic upheaval and stoke bellicose nationalism.

Asian diplomats I have spoken to are putting on a brave face, hoping that Trump will be transactional and pragmatic on foreign policy. They have survived other nescient buffoons — former presidents Ronald Reagan and George W. Bush — and expect that U.S. foreign policy will settle back into old patterns.

Malaysia’s corrupt leader and Thailand’s authoritarian regime will be happy to see the last of Obama and will hope the negative scrutiny abates under Trump. Myanmar’s de facto leader Aung San Suu Kyi was close to Obama, but it is hard to imagine that she can build similar rapport with a misogynist such as Trump. Indian Prime Minister Narendra Modi will welcome another demagogue to the growing fraternity while his Hindu chauvinist supporters revel in Trump’s Islamophobia. But this prejudice won’t play well in Pakistan, Bangladesh or Indonesia, the nation with the world’s largest Muslim population. Singapore frets about reckless moves on trade and security while the Philippine’s erratic President Rodrigo Duterte will meet his match. Despite concerns about a trade war, Beijing has to be gloating about the weakened U.S. influence in Asia gifted by Trump. And the rest of Asia? Nervously imagining a Pax Sinica.
at November 23, 2016