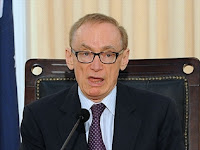 The visit was Mr Kishida's first overseas trip since Japan's new government took office in December. His regional tour also took in the Philippines, Singapore and Brunei. Australian Foreign Minister Bob Carr described the day's talks as productive, saying the two countries discussed Australia's role on the United Nations Security Council, as well as North Korea's missile launch.
***
CORBETT: The purpose of this visit is for the new Foreign Minister to make connections throughout the region, so Australia is coming at the end of a tour through the region, where he's been to four other countries. So I think the key thing on his mind is probably the security question around maritime security and territorial issues. So I think those were the big items.

There are a number of other specific Australia-Japan issues that were probably discussed and certainly are of interest to Australia.

COCHRANE: One of those I imagine would have been trade. Details are still a little unclear as to exactly what was discussed in the meeting between Mr. Carr and Fumio Kishida. But what sort of things would both sides have been wanting to try and get out of these talks on the trade issue?

CORBETT: Well as you know, we are still negotiating an Economic Partnership Agreement between Australia and Japan, sometimes called a Free Trade Agreement and in fact the agreement to start the negotiations was undertaken by Prime Minister Abe, when he was Prime Minister the first time, so he and John Howard agreed that. So these have been running now, the negotiations, for a long time and we're told that they are not making a lot of progress. They certainly seem to have stalled.

With the new Abe Government, it's not clear whether they're going to be enthusiastically pursuing this agreement. They have a track record of being fairly protectionist and of saying that they're not interested in joining TPP and Prime Minister Abe has been regarded as somebody who supports the agriculture lobby and the big issue between Australia and Japan in these negotiations is how much will Japan open the agriculture market and that's what's holding things up.

But actually, there are a number of other things likely to be in the agreement which are much more economically significant and which are the reasons why it would be useful to get on with the negotiation and they're around service sectors.

COCHRANE: Now you mentioned that security issues, regional security, in particular, maritime security, would have been something very much on the Foreign Minister's mind as he was travelling around the region, stopping in the Philippines and Brunei, both countries with territorial disputes pending against China in the South China Sea and Japan, of course, with its own territorial dispute with China in the East China Sea. What sort of role might Australia play in this?

CORBETT: Well, I think that is a very good question. There are different views in Australia about that. The official position is that we are simply urging calm and we're not taking any kind of formal position on either side about who's right or any of that. But clearly it's in Australia's interests to see secure and peaceful relations around the region and these territorial disputes have the potential to flare up into unmanageable disagreements quite quickly. So I think the Australian position in my view should be to be trying to act as broker where possible, to try and perhaps improve the communication between China and Japan.

We have interests in our relationship with both sides and so it's definitely not in our interest to support one side over the other. But there are potential ways to get international agreement about the sharing of the resources that are in dispute in the marine regions around these islands, and if Australia could help to get a negotiated agreement about how resources are to be shared would take some of the tension out of this, that would be very useful. But that can only happen behind closed doors.

I don't think Australia can achieve any of that by making public statements and so if there was conversation of that kind, we wouldn't expect to hear about it.