An encounter with a denier 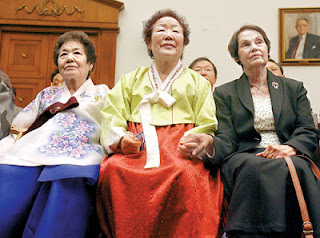 The sick man of Asia: costs of denial
By Richard Tanter
Nautilus Institute, January 10, 2012
Let me tell you a story. It’s a bit long, and about a friend of mine and her family, but it might explain why I believe that the idea of Japan as the northern hinge of the United States’s pivot strategy against China is simply not viable in political terms, and may well prove dangerous.

In early March 2007 I found myself on the stage of CLSA’s annual Japan Forum in Tokyo, together with Koike Yuriko, at the time Prime Minister Abe’s National Security Advisor, and soon after, Minister of Defence. Koike, an Arabic speaking former journalist, gave a short anodyne talk to the 800 or so assembled suits about plans for a national security council. I followed on with some hopefully less anodyne comments, but then shifted from my prepared remarks to raise the issue of the Prime Minister’s comments in that morning’s newspaper in response to the testimony to a US Congressional sub-committee by three women, two Korean and one Australian, about their experiences as sexual slaves for the Japanese Army in WW2. Abe had said that while the events were regrettable, “in the legal definition”, this was not a matter of coercion.[1]

Addressing Ms Koike, and trying to keep a level tone, I said that as someone who had lived in Japan for a long time, with a deep affection for the country, I thought these remarks were disastrous for Japan in policy terms. Soft power – the capacity to generate a desire for imitation or admiration – is generally regarded as an important part of a country’s strategic posture, but for Japan this issue, and the inability of the country’s leaders to rise above it, was the repellent – and repelling – inverse of soft power. Moreover, I said, I had a small personal connection to the issue which would not permit me to let the matter pass without comment.

One of the three women who testified so courageously in Washington, was a woman named Jan Ruff O’Herne, who happened to be the mother of a close friend, the Australian painter Carol Ruff. Born and raised to Dutch parents in the Dutch East Indies, Jan had been a 17 year old girl planning a life as a nun when she and her mother were interned by the Imperial Army in 1942. Jan and other young girls were sent to the city of Semarang, to a brothel for army officers, where she was raped, repeatedly, daily, for many months. Eventually returned to the internment camp, Jan told only her mother, who just held her, and her priest, who told her any hopes she had of becoming a nun were over. At war’s end, the camp was liberated, and she fell in love with a young British soldier, Tom O’Herne, who she married, telling him, and no-one else for the next fifty years, what had happened to her. Despite all, it was a happy marriage, and Jan and Tom raised two daughters, Eileen and Carol, in Australia.[2]

In 1989, the first few extraordinary Korean women told the story of their abductions and systematic rape by the Imperial Army to their fellow Koreans, and then the wider world, bringing with them the strange and shocking phrase “comfort women”. Jan saw these women on television, and felt that she too had to break the silence of half a century, and sat down to write her story for her daughters in an old school notebook, which later became her remarkable book Fifty Years of Silence[3]. The Korean women had given her the courage to face the feelings of shame:

The truth is winning. Because, all of a sudden, after 50 years we had the courage to shed the shame.It was a risk I had to take, but I was afraid. Then to have the enormous relief when I had spoken out to be received back among my friends and my parish, and be welcomed and embraced and flowers put on my seat in the church, when I first went to Mass. It was a wonderful reception I had, you know? Mmm. It was good. [4]

For her daughters, suddenly many things made sense.

“My mother’s a very beautiful woman”, said Carol. “She’s really attractive and, as a young woman, she was stunning. And, in a sense, sometimes I think that her beauty has also been her disguise. We knew all along that she’d been in prison camp. I’ve never seen my mother as someone with a terrible past that she was hiding from me. Not a hint.”[5].

Carol and her then husband, the film maker Ned Lander, went on with Jan to make an award-winning film, also called Fifty Years of Silence[6], about Jan’s story, and most importantly, about her first, anxious visit to Japan after an invitation to speak about what had happened to her, and to so many other girls and young women.

Carol and I were friends from Alice Springs, that hard and special part of Australia where art and politics meet, where Carol painted the spirited landscape.[7] When the film came out, I was teaching politics in a Japanese university, and organising a fieldwork program for third year students to come to Australia for half a year. Carol was by now living in Sydney, and I asked her if she would consider showing the film to my students, and then talking with them. She had never shown it to a Japanese audience, and was not sure – about her own response or that of the students.

Beforehand I prepared the students, talking about the historical background, working through the script of the film. On that first occasion, as in many later years, crowded into in Carol’s little Sydney house, the mainly female students watched intently, some in increasing dismay, and some, at least initially, in disbelief or denial, but all shattered by the end, wondering how they could possibly speak to the daughter of this extraordinary woman. And then the conversation, the many-stranded, halting, tearful, wondering conversations that were founded on the rock of authentic witness, began. In later years, Carol and I would start the film off, and then move to coffee in her tiny exquisite garden, catching up on the doings of our families, the quiet gossip about our friends, until it was time to go back in, to wait for the end of the film, and readying ourselves for the electric silence and the talking.

On stage at the CLSA event, after explaining the Abe statement, I told a little of Jan’s story. I said to Ms Koike that I hoped that for both strategic policy reasons and because of the simple truth of what these women had been saying about their own lives in a committee room in Congress, the Abe administration would change course, and choose a path of historical reconciliation. After all, if a country so deeply imbued with racist attitudes as the Australia of my childhood could overcome most of its war-borne antipathy for Japan, then surely it was possible to at least start that process here. Ms Koike thanked me for my policy advice – with some asperity.

After the session, the atmosphere in the backstage waiting room was a tad awkward for the CLSA suits. I apologised to Ms Koike for ambushing her, but she was unflustered, and brushed any unpleasantness aside. That’s politics she said, smiling. I was about to say to her that Jan Ruff O’Herne was a deeply religious and decent person, outside the world of politics, and except for this issue, which marked her so deeply, she was an “ordinary” person who I felt sure Ms Koike would be able to talk with.

“Sometimes God asks of us, late in life, to do an amazing task. And this has come to me late in life, you know. Without my faith I couldn’t have even survived the time that I was in the comfort stations. My faith has always been the backbone of my whole life.”[8]

Before I was able to say any of these well-meaning, but, as it turned out, naive things, Ms. Koike leaned towards me and said,

“But you know, all this is the work of Korean leftists. There’s nothing to it.”

I was left with my mouth open as she wished me good bye, leaving the room with her minders. I realised that I had just heard the authentic voice of Japanese restorationist nationalism from a woman already spoken of at that time as a future prime minister. If a woman younger than me – and a journalist even! – was in such deep denial, it was clear that there really was nothing useful to be said.

Just a few months earlier, at the ceremony to open the new Ministry of Defence, Prime Minister Abe declared it

“a landmark event that marks the end of the postwar regime and will lay the groundwork for building a new state.”[9]

There could not have been a clearer statement of the goal of the first Abe cabinet, which fizzled out ignominiously but typically a few months later. The most extreme nationalist amongst Japanese postwar leaders[10] (and grandson of war-criminal and later PM Kishi Nobusuke), Abe Shinzo is again the leader of America’s most important ally in the Pacific pivot, and once again, despite American hopes of a return to alliance stability, the issue of sexual slavery is on the Abe agenda. Most ominously, there has been a Cabinet-level suggestion of “revising” the 1993 “Kono statement” over sexual slavery[11], and Prime Minister Murayama’s 1995 apology.[12]

Militarily, of course, the process of Heisei militarisation Japan has undertaken over the past two decades has made it into a quiet military powerhouse, much more capable of close and effective operational coordination with the US than at the end of the Cold War.[13] But politically, Japan is the sick man of Asia, capable of neither building the successor to the late, great Japan Incorporated, nor abjuring the enduring toxins of its colonial and military domination of East and Southeast Asia three generations ago. The United States may well wonder whether the new state Abe has in mind is one that fulfills American hopes.

Go to next page for references