Futenma politics: Heart of the impossible for Hatoyama 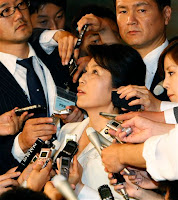 There's only one thing worse than enemies, and that's allies, as the Japanese Prime Minister is demonstrating in trying to answer the Futenma question.

Hirano briefed US Ambassador John Roos as to the Futenma options on Tuesday. The Prime Minister has said this is not true.

It is hard to tell what is.

In an apparent attempt to knock some sense into the issue, Aki Nakashima, one of three parliamentary defense vice ministers, stated on March 3 that the facility would stay in Okinawa, with compensation going to the local community affected by the move. Hirano, however, quickly said that was not true.

The political infighting in the coalition has dragged on for months. Hatoyama hopes to rely on the advice of the three-party panel to settle the Futenma issue by May. But every time the team seems to be inching toward a compromise, the anti-base Social Democratic Party stomps out. The latest scene started as an apparent ideologically tinged struggle between it and another miniscule coalition party, the People’s New Party.

Closing the debate and letting the cabinet screen the various proposals for feasibility is unlikely to muzzle the SDP, whose head, Mizuho Fukushima (pictured), holds a cabinet post. Ultimately, the final decision will depend on whether the Prime Minister is willing or able to knock everyone's heads together.

The PNP has proposed that Futenma base’s helicopter function be transferred to a land-based site on Camp Schwab in Nago City, scrapping the existing plan to build a V-shaped runway on the beachfront of that base. This is similar to the original, 1990s US proposal that only called for a small 500-meter heliport. but it now includes the possibility of a 1,500-meter runway to accommodate Ospreys, the successor aircraft to the Futenma choppers.

The SDP, however, has been committed to shipping all of Futenma’s Marines to Guam or even Hawaii, as long as they are out of Okinawa. The party in its latest proposal has added the possibility of transferring the functions to any one of a number of sites on mainland Japan, under the condition of the new facility having a shelf life of five to 15 years. But adding a time limit is a non-starter since then Okinawa Governor Inamine once tried to impose a 15-year limit on the first plan to move Futenma to waters off Camp Schwab but was stiffed by the US.

The SDP also reportedly wants the Marines now at Camp Schwab to be booted out of Okinawa, as well. The PNP says it is willing to entertain any proposal for debate, but is concerned about the SDP’s suggestion that it did not mind delaying the prime minister’s final decision indefinitely beyond May in order to build a consensus in the panel.

This apparently would allow the SDP to somehow impose its will on the majority. Upset, PNP lawmaker Shimoji, himself from Okinawa and a member of the coalition panel, has said he would resign his Diet seat if SDP head Fukushima has her way about letting the May deadline slip. He is aware that Fukushima has essentially been controlling the Futenma agenda since last December when she publicly blocked the Hatoyama government from making a decision through a bilateral working group with the US to go with the existing relocation plan.

Although the leaders of the ruling DPJ have kept out of the tug-of-war between the PNP and SDP, signs are that the DPJ is quietly siding with the PNP. Even Secretary General Ichiro Ozawa seemed to open the way to a land-based option at Camp Schwab in careful comments to his friend, lawmaker Muneo Suzuki.

The SDP is being disingenuous in proposing nine mainland sites, including Hokkaido’s Tomakomai, as candidates for the Futenma relocation facility. None of the sites seems to have been vetted for feasibility or local acceptance. Already, even the Nagasaki chapter of the SDP has weighed in with an “absolutely no” to the party’s including the SDF’s Omura Base in that prefecture. The list was apparently patched together to show the party’s reasonableness. Guam seems to remain the ultimate goal for the party’s relocation scheme.

Politics in Okinawa is also a complicating factor. Nago City’s new mayor, elected by a narrow margin, has come out strongly against moving any part of Futenma to Camp Schwab, including the inland proposal. His predecessor was willing to accept the facility. A weekly magazine, Shukan Shincho, in a recent issue that examined the some $2 billion in subsidies that Okinawa receives from the central government for hosting US bases, revealed that Nago City not only has benefited economically because of the presence of Camp Schwab but also is not representative of the views of Henoko, the district adjacent to the base, whose residents for the most part would benefit from the additional revenues, jobs, and subsidies the Futenma relocation would bring.