Koike tests possibilities and perils of populism in Japan 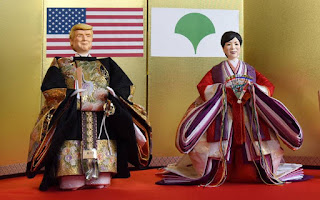 Populism is revanchism by another name in Japan

The horrendous images beamed around the world from Charlottesville, Virginia, serve as a poignant reminder that white-supremacist populism is a toxic force in the United States. President Donald Trump’s repugnant response, coming out on the wrong side of history on both Nazis and the Ku Klux Klan, inflamed passions and reminded everyone that he is unfit to be president.

The Brexit vote, Trump’s election and French President Emmanuel Macron’s thumping victory are symptomatic of the age of anger we live in. Populism is about claiming to represent the “real people” and targeting the establishment, corruption and immorality. Populists feed on social discontent and promise to clean up a bankrupt system that is rigged for the favored few while the interests of the “real people” are neglected. They invoke culture wars and promise to revive and protect traditional values and community ties that have been sundered by a self-seeking elite. They promise a better life and trade in disappointment and nationalist grandstanding.

Populists have astutely exploited unease about job security and rising inequality, stoking resentment against the broken promises of globalization made by the political and business establishment.

So why no populist revolt after Japan’s economic bubble collapsed in 1990 or the 2008 “Lehman shock”? Perhaps this is because Japanese politics is influenced by a culture that esteems self-effacement, proper conduct and harmony. This is to say that a bumptious and meretricious candidate like Donald Trump is unthinkable.

Populism feeds on significant disparities in wealth, power and cultural values between the governing elite and “the people” and harps on a shared feeling of exclusion — slim pickings here as income disparities are relatively modest and social cohesion is strong.

Anti-immigrant activism is also quite limited because there are not many in Japan. Non-Japanese legally resident in the country total about 2.23 million, with an additional 200,000 foreign trainees and 240,000 foreign students. Japan’s welcome mat for asylum seekers is minuscule, with the government accepting just 28 refugees from a total of 10,901 applicants in 2016, so there is not much to grandstand against.

Zaitokukai, a right-wing fringe organization, has been at the forefront of xenophobic agitation, targeting Japan’s Zainichi community of ethnic Koreans who came to Japan in the prewar era, mostly under duress, and remained after Japan’s 1945 defeat. But its hatemongering confronted much larger counter-demonstrations, and in the 2016 Tokyo elections the group’s founder ran and won 110,000 votes. That’s puny compared to the nearly 3 million votes that clinched Yuriko Koike the governorship, but that’s still a lot of xenophobes.

Populism in Japan is not feeding on resentments stirred by glaring economic disparities, a large immigrant population or significant cultural divisions. Instead, Koike is riding an anti-establishment populist wave like her mentor, Junichiro Koizumi. He became president of the Liberal Democratic Party in 2001 by promising voters that he would destroy the party. He didn’t sugarcoat his agenda, instead embracing the slogan “No pain, no gain,” offering hope of better times down the road, but only if the public would bite the bullet now; voters loved it. He was a populist neoliberal raging against the conservative establishment who convinced people he was on their side against the vested interests, even as his popularity helped the party that represents those interests.

Telegenic and charismatic, Koizumi was the first Japanese prime minster who understood the power of media in the theater of politics. He barked out pithy sound bites, controlling the message by giving the media what they needed on his terms.

Current PM Shinzo Abe is no populist, but he has learned about the threat of populism. Koike emulates Koizumi in the theater of politics, winning public acclaim by promoting transparency and accountability regarding the 2020 Tokyo Olympics and the relocation of the iconic Tsukij fish market. The public lapped up the spectacle provided by hearings that skewered the LDP old guard for sweetheart deals and greenlighting the market’s relocation to a toxic site. It was classic David vs. Goliath — we the people against the powers that be — earning Koike kudos for having the guts to challenge the powerful dinosaurs that call the shots in Japan.

Koike embraces right-wing political positions very similar to Abe’s, so her new party, Nippon First no Kai (Japan First), will struggle to stake out policy positions that make it an appealing alternative to the LDP. Her formula for success has been outing cronyism, promoting transparency and making the establishment look fusty and clueless, admittedly not a big challenge when you can serve up ex-Tokyo Gov. Shintaro Ishihara and Yoshiro Mori, head of the Tokyo 2020 organizing committee, as exhibits A and B. In championing transparency and accountability, she has made a name for herself on issues that Abe is vulnerable on given recent scandals, missing documents and his having let Tomomi Inada off the hook for what appears to be a scandalous role in an alleged coverup at the Defense Ministry on her watch.

Problematically, Abe occupies Koike’s ideological comfort zone, so she needs to cannibalize his base to get any traction. It is thus imperative that she presents an alternative policy agenda to highlight their differences and tap into simmering dissatisfaction with the status quo. Pushing for a comprehensive indoor smoking ban in Tokyo and promoting work-life balance to cut down on excessive hours will help, but she needs much more. She could gain considerable support by declaring opposition to nuclear reactor restarts and pledging to phase out nuclear energy.

Success brings heightened scrutiny. Back in 2012, Kazusa Noda, who Koike named as head of Tokyo First in 2016, suggested the current Constitution should be invalidated and that Japan should return to the pre-World War II version. But isn’t that Abe territory?

As Koike’s record comes under closer scrutiny, the media may pop her populist bubble. Indeed, the Asahi and Mainichi are now challenging her pro-transparency image, with the Asahi giving her a grade of ‘F’ for her first year in office due to her “black box” approach to policymaking. They assert that there was no transparency in her signature policy reforms and she is acting just like her predecessors.

Populists thrive on the limelight, but it could prove Koike’s undoing, as France’s Macron now knows all too well. Bet she now wishes she had not made a point of saying how similar they are.
at August 28, 2017