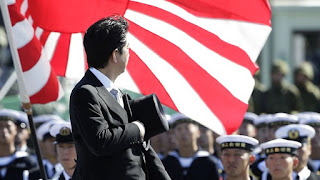 BY DAVID MCNEILL, writes for The Independent, The Economist and other publications. He is co-author of Strong in the Rain, a collection of survivors’ stories from Japan’s 2011 Tohoku disaster and is an APP member.

Prime Minister Shinzo Abe in April delivered a speech to the U.S. Congress — the first by a Japanese leader — that lauded deepening trade ties and the military alliance with the United States.

The speech, carefully tuned for his U.S. audience, cast Abe as a defender of strong democratic principles, a leader with “deep repentance” in his heart for the “lost dreams of young Americans” who died fighting Japan in World War II.

Conspicuously missing, writes veteran Japan watcher Gavan McCormack, was any mention of the core Abe values that Congress could hardly be expected to share: “take back Japan,” “cast off the postwar regime” and revise the U.S.-imposed Constitution; teach “correct” history to make the country’s youth proud and “revere the spirits of Japan’s war dead,” including those convicted by the Allies as war criminals.

Such views are deeply controversial outside Japan but, 70 years after the end of the war, they appear to hold sway among a remarkably large number of the nation’s political class. About a third of the Diet and well over half of Abe’s Cabinet support them. All are members of the parliamentary league of Japan Conference (Nippon Kaigi), arguably the country’s most powerful nationalist lobby group. Abe is its “special adviser.”

Japan Conference’s charter lists six key goals: respect the Imperial Family as the center of Japanese life; nurture patriotism; promote a new Constitution “based on our nation’s true characteristics”; protect the sovereignty and honor of the nation’s independence; nurture young people to grow up with pride and love for their nation; and establish a strong army and promote the nation’s status in the global community.

In practice, says Yoshifumi Tawara, who heads a small nonprofit organization called Children and Textbooks Japan Network 21 that monitors the group, this is a shopping list of revisionist causes: applaud Japan’s wartime campaign to “liberate” Asia from Western colonialism; rebuild the armed forces; instill patriotism among students brainwashed by “left-wing” teachers; and revere the Emperor as he was worshipped until the calamity of Japan’s defeat in World War II.

Kobayashi says the group is run by people who want to bring back much of Japan’s pre-war Meiji Constitution, before it was scrapped during the American-led Occupation between 1945 and 1952. Some are descendants of the people who started the war, he says.

Japan Conference’s supporters say the liberal Constitution has emasculated Japan. Many despise the “victor’s justice” meted out by the Americans, and the pacifist clause that neutered the country’s armed forces. In Abe, they have a prime minister who is considered one of their own, says Tomomi Yamaguchi, an anthropologist at Montana State University who studies the group.

Japan Conference has 242 local chapters (in addition to 47 prefectural headquarters), around 38,000 fee-paying members and a network that reaches deep into the government. Its members or affiliates include the former heads of large corporations, university presidents, Self-Defense Force chiefs of staffs, several party chiefs and at least one former chief justice, who chaired the group for several years.

Despite this impressive firepower, determining the group’s exact influence is difficult. The country’s media mostly shy away from covering it, says Tamotsu Sugano, a journalist and researcher.

Sugano believes Japan Conference’s most important achievement has been to unite right-wing movements under a like-minded program.

“Throughout 40 years of history,” Sugano says, “it has been sending almost the same message and focusing on the same priority: educating the young generation.”

Japan Conference’s signature drives have helped pass laws and legal changes in local councils and in the Diet, Yamaguchi says. It has helped banish much of what it calls “left-wing” teaching from schools and has brought back the tradition of singing the national anthem and standing for the Hinomaru flag. A key supporter is former Tokyo Gov. Shintaro Ishihara, who mandated punishment for teachers who refuse stand, face the flag and sing the anthem during school ceremonies.

A decade ago, Japan Conference collected 3.6 million signatures demanding revisions to the education law that would make it compulsory to teach children patriotism. Most of its current energies are aimed at getting 10 million to sign for a national referendum on revising the Constitution. It also wants to remove the pacifist clause, Article 9, and, instead, enshrine supposedly traditional family values in it. A draft of a new charter drawn up by the ruling Liberal Democratic Party in 2013 reflects much of Japan Conference’s agenda.

The group gives nationalists in China and South Korea an excuse to claim that Japanese militarism is on the rise again. It wants Abe to continue to visit Tokyo’s Yasukuni Shrine, though such pilgrimages are seen in much of Asia as an endorsement of the country’s wartime leaders and their war aims. Abe triggered a major diplomatic row when he last went in 2013. Japan Conference’s growing political heft is partly credited with increasingly unabashed displays of allegiance to the shrine — a record 168 Diet members visited during the spring festival of 2013.

Unsurprisingly, this project of national self-love beautifies the ugly past. Japan Conference’s members reject what they call the country’s apology diplomacy and say the historical account of the 1937 Nanking Massacre, when Japanese troops sacked the Chinese city, is exaggerated or fabricated. Supporters have campaigned against anything that shows Japan’s wartime behavior in a bad light, bombarding exhibitions on war crimes, for example, with petitions and phone calls.

“I am just enormously concerned about the way Japan is going,” Suzuki says. “The Abe administration doesn’t think there was anything wrong with what Japan did in the war — they just think it was unfortunate that they lost.”

Much of the far-right agenda in Japan slips past American politicians, she says.

“They don’t really see how this will play out in East Asia because they need the U.S. bases (in Japan),” she says.

A closely allied group is the Shinto Association of Spiritual Leadership. In the late 19th century, the country’s oldest religion, Shinto, was reinvented as a tool of state, serving as an ideology that helped mobilize Japanese to fight wars in the Emperor’s name.

In 2007, lobbying by the association and Japan Conference helped to persuade the government to restore April 29 as a national holiday. It was previously observed before 1989 as wartime monarch Hirohito’s birthday.

Even opponents are impressed at how radical conservatives have quietly transformed the landscape of Japanese politics. Japan Conference members, however, are believed to be frustrated with the slow pace of change.

“We are simply trying to make Japan a normal country,” says Yoshiko Sakurai, a leading supporter. That means possessing a strong economy and military, as well as a proud citizenry, she says.

It remains to be seen how far this project will go. Despite the fact that nobody had shown deeper hostility to the postwar state forged by the Americans in 1945-52 than Abe, McCormack says, Washington has turned a blind eye to his revisionism. In return, Abe has pursued a dream long cherished by both sides: shrugging off the country’s pacifist shackles and deepening the military alliance with America.

According to Tawara, that could be a costly deal.

“I don’t think many people have grasped yet what is happening in Japan,” he says. “The situation is very dangerous.”
at October 03, 2015