The suicide politics of Futenma relocation 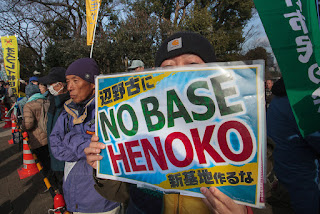 Prospects on the MCAS Futenma Issue

Newly elected Okinawa Governor Takeshi Onaga, supported by both conservatives and reformists, which is quite a rare phenomenon in Okinawa, announced his team leaders on the US military base issues at the end of 2014 and the beginning of 2015. Mr. Mitsuo Ageta, the former speaker of the Naha City Assembly, was appointed as Vice Governor (VG) in charge of base issues--the Okinawa Prefectural Government (OPG) has two vice governors. Mr. Masaru Machida was appointed Director General of the Governor’s Office. He had been an executive at the Okinawa Churashima Foundation, an affiliated organization of the OPG. VG Ageta used to be a member of the Okinawa Chapter of the Liberal Democratic Party (LDP), yet left after the party switched its policy on the Henoko plan from "against" to "accommodation." He formed the Shimpuh-kai (New Wind Group) as a counter.

The Regional Security Policy Division, of which I was a member, is still alive. People wondered whether this section could survive the Onaga administration, since it was created by his predecessor, Gov. Hirokazu Nakaima. Gov. Onaga replaced this division with one named to clearly express its intent that is to deal with “the issue on the construction of new Henoko base” and called it more directly the Henoko Base Construction Countermeasures Division [ 辺野古新基地建設対策課].


Onaga can play only “All-or-Nothing” negotiation
Despite his landslide victory in the November 2014 gubernatorial election, Gov. Onaga’s power base is not solid. As his slogan during the campaign was “all-Okinawa,” Mr. Onaga limits his own maneuverable space to the minimum. In other words, all he can say  “No Henoko” and “No Ospreys” are acceptable by all Okinawans, including supporters of the US military bases. “All-Okinawa” does not indicate any realistic compromise. Should he make a statement beyond “No Henoko” his power base shatter.

In other words, Gov. Onaga can only play an “all-or-nothing” game, namely accept everything he says or no deal. Thus, he cannot be a reasonable negotiator with either the Government of Japan (GOJ) or the US Government (USG).

Since the inauguration of the Onaga administration in December 2014, senior officials of the GOJ have refused to meet Gov. Onaga. This was considered  “extra-ordinary.” (Other governors rarely meet with the prime ministers.) This “all-Okinawa” phenomenon has never happened since the return of Okinawa to Japan in 1972. People speculated that Tokyo viewed Naha, the capital of Okinawa Prefecture, cautiously, wondering whether the Governor could maintain his power base with both conservatives and reformists.

Nevertheless, Gov. Onaga and senior officials of the GOJ did start to meet in April 2015. In August, the two parties held a series of meetings discussing how to reduce Okinawa’s hosting responsibility and on the economic development. The last one was September 7th. It ended with no conclusion.

During the meetings, Gov. Onaga did not step back from his “No Henoko” stance, however hard the Abe cabinet tried. In office barely a half year--out of four--it is unreasonable to expect the governor to destroy his power base by backing down. This would be political suicide.

Gov. Onaga has few options to take
What can Gov. Onaga do to stop the landfill at Cape Henoko? Gov. Onaga’s advisory committee issued a report in July 2015 concluding that there were flaws in the process of Gov. Nakaima’s approval. The Ministry of Defense (MOD) resumed its boring investigation on September 12th, soon after the break-up of the intensive August and September meetings between the GOJ and the OPG. Gov. Onaga reacted to this by starting a procedure to cancel the landfill authorization on September 14th. This legal process is expected to take about a month.

Still, the OPG is powerless if the Abe cabinet simply ignores it. The OPG can appeal to the court to stop the landfill, but the court has no authority to interrupt the boring investigation and its ensuing landfill until a verdict is given. this could be months or years. Should the OPG win at the court after the landfill is completed, the result is that no one can bring back the nature as before. Thus, Gov. Onaga’s cancellation of the landfill is nothing other than a political performance.

Left in Gov. Onaga’s hand is un-approving any petitions for changes and additions to the original plan. The plan was submitted by the MOD to Gov. Nakaima in March 2013. At the time, the MOD did not anticipate working with an unfriendly OPG to develop or alter the plan.  The results of the boring investigation are certain to cause construction changes. Onaga could use these changes to stop the landfill and slow down the project.

Driving Gov. Onaga to the corner simply drives Okinawans to protests
Gov. Onaga has very limited options. Is it politically productive to force him to say yes to the Henoko plan? Sure, he might approve change petitions to smooth the landfill.

On the other hand, once the Okinawans hear that Gov. Onaga has succumb to the Abe cabinet, the anger demonstrated at the gubernatorial election in 2014 would explode at Cape Henoko. Okinawan people have made clear their rejection of the Henoko plan many times through elections. LDP administrations, however, have forced their leaders to “flipflop.” Okinawans view this as negligence against their will. If their voices raised democratically are unheard, they believe they have no choice but to resort to force at the construction site.

In Tokyo, I am often asked whether the protesters at Cape Henoko are non-Okinawans, mostly “professional” protesters similar to those during the construction of Narita Airport. There is no official and accurate data on where these protesters come from and I doubt such question is relevant for two reasons:
If this happened would the Abe cabinet have the capability to deal with such situation? Also, would the USG, especially the US Forces in Okinawa (USFO), want to expand such anti-base sentiments in Okinawa? The USG wants the GOJ to manage prudently Okinawa to keep the islands safe enough to deploy its forces. The USG should not want to miss the forest (the USFO, especially Kadena Air Base) from the trees (the Futenma Air Station).

Paradoxically, the more the Abe cabinet pushes Gov. Onaga into a corner, the more Okinawans are driven to resort to force, which is a political suicide to the GOJ. The worst scenario can be avoided only by understanding this logic in Okinawa, by seriously searching for alternatives to the Henoko plan, and by seriously addressing the necessity to reduce the heavy hosting responsibility of Okinawa.
at September 24, 2015