The postwar generation may now be the majority in Japan, but they too must know the atrocities of war.

By LESTER TENNEY
Dr. Tenney served in the 192nd Tank Battalion of the U.S. Army and survived the Bataan Death March

Imperial Japan became history on Sept. 2, 1945. Gen. Douglas MacArthur accepted Japan’s unconditional surrender on the deck of the USS Missouri in Tokyo Bay, ending World War II. For me, nearly 600 miles south in a prisoner of war camp outside Nagasaki, unaware of these historic events, I simply remember the pure joy of liberation.

What was V-J Day like for POWs? For those of us in Fukuoka No. 17-B POW Camp, the war ended on Aug. 15, when our Mitsui company overseers, without explanation, stopped sending us down into their coal mine. We were returned to camp for an unusual midday meal of limitless rice and recognizable vegetables. We received our first full Red Cross boxes. And the camp guards said “hello” in English instead of striking us with their rifle butts for not bowing.

After lunch, the camp commander, flanked by trucks mounted with machine guns, gathered us on the camp’s parade ground. He curtly announced, “America and Japan now friends. War is over.”

There is no accurate way to describe how it feels to be a slave one moment—starved and abused, forced to work long hours in a treacherous mine, beaten daily for not working fast enough or not bowing low enough—and a free man the next.

After more than two years underground in the dark, narrow seams of a coal mine, it was glorious to be in the sun. American planes soon appeared overhead and with them came parachutes carrying 55-gallon drums of food, clothing, medicines and magazines. One parachute failed to open, its cargo of fruit salad spilling out onto the camp yard. We happily and immediately dined on the scattered remains.

Baron Mitsui, a 1915 Dartmouth graduate who owned our coal mine and many others, hosted a series of dinners for senior Allied commanding officers of our POW camp. The baron had often visited his captive village and was aware of the grim conditions. Over the meals, he reportedly asked the officers for their tolerance and thanked them for their efforts. Photos from the dinner series show a wary indulgence in the eyes of the American, Australian, British and Dutch guests. 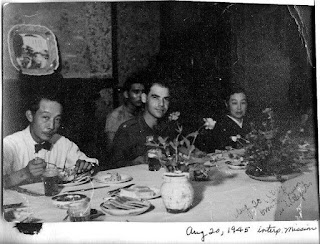 Fast forward to last month, when Prime Minister Shinzo Abe used the same word—tolerance—in his statement on the 70th anniversary of the war’s end. “How much emotional struggle must have existed and what great efforts must have been necessary . . . for the former POWs who experienced unbearable sufferings caused by the Japanese military in order for them to be so tolerant nevertheless?” Mr. Abe marveled.

While I welcome any step, however modest, the Japanese make in addressing war crimes committed against POWs, this word stops me short. It makes a war crime a matter of inconvenience. I can tolerate someone cutting me off in traffic. But being a POW was not a matter of tolerance. It was a matter of life or death—mostly death.

The denial of water and food on the Bataan Death March didn’t simply inconvenience us; it killed thousands of soldiers. My fellow prisoners and I didn’t tolerate nor have we forgotten the beatings and torture, the starvation and broken bones, or the filth and stench of dying men. What tolerance did I have watching my buddy tortured so viciously that he had to have both legs amputated?

And what of today? Our wait for Japan’s apology, offered officially in February 2009, wasn’t tolerance. It was patience. Patience for justice.

Still, Mr. Abe’s awkward statement on Aug. 15 suggests that our patience may not be in vain. His mention of POWs is the only reference in the statement that clearly matches a noun of wrongdoing to a verb of responsibility. He correctly points out that “unbearable suffering” was “caused” by Imperial Japan’s military. Acknowledging the perpetrator of a crime and the crime itself is the first step toward reconciliation.

For me, the war is hard to forget. But as Mr. Abe points out, the postwar generations are now the majority in Japan. Japanese today aren’t responsible for what happened more than 70 years ago. But they also cannot forget or distort the past.

Japan owes me, the descendants of its victims and its own citizens the truth. As Mr. Abe said, “We Japanese, across generations, must squarely face the history of the past. We have the responsibility to inherit the past, in all humbleness, and pass it on to the future.”

Imperial Japan tormented, enslaved and defiled many people. This is a grave legacy to pass on and to teach future generations. But it is vital to keep memories like mine alive. It’s one thing to remember great deeds done by great men, like Gen. MacArthur in Tokyo Bay. But World War II’s history is composed of the suffering of many individuals in different circumstances. This, too, should not be forgotten, or else the lessons of the war will be incomplete.
at September 02, 2015