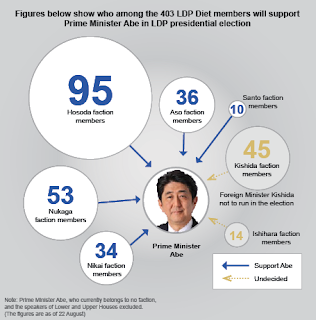 Doubts about Shinzo Abe’s health and ability to serve as president of the LDP emerged in late June. According to an article in the August 27th  issue of the Shukan Bunshun, Abe’s ulcerative colitis resurfaced.

The gossip magazine claims that he began to vomit blood during a dinner meeting with JR East President Tetsuro Tomita, JR East adviser Mutsutake Otsuka, and LDP policy chief Tomomi Inada. The magazine speculates that these health problems, stemming in part from stress, forced him to tone down his speech commemorating the end of World War II.

Rumors about Abe’s health and fitness for office appear regular in the tabloid press. Nevertheless, Abe won the LDP presidency unopposed in early September with his term expiring in 2018. This begs the question, “Who will win succeed him as LDP president and, by extension, Prime Minister?”  Some think that if Abe finds it difficult to carry out his duties due to bad health, he will name Deputy Prime Minister Taro Aso or LDP Secretary-General Sadakazu Tanigaki as his successor in a bid to maintain his influence.
According to a March 10th article in The Japan News, an English-language news source published by the conservative Yomiuri Shimbun, LDP factions have neglected grooming candidates that would be able to muster support like Abe. Some contenders, however, are beginning to appear.

Abe has recently called attention to Tomomi Inada, a member of his own Hosoda faction and the Minister of State for Regulatory Reform. She is expected to be named the Chief Cabinet Secretary or Minister of Economics, Trade, and Industry (METI) in Abe’s new cabinet, according to a September 4th article in the liberal magazine, Shukan Asahi. Inada has defended Abe, even in his disagreements with members of his own cabinet, such as Chief Cabinet Secretary Yoshihide Suga, as reported in the August edition of Facta. Abe’s focus on Inada, whom he likens to Joan of Arc, makes her his likely choice for the next Prime Minister.

Toshimitsu Motegi belongs to the Nukaga faction, currently second in strength behind Hosoda. His faction has been rocked by calls for him to take over Fukushiro Nukaga’s leadership role, and by scandals over misuse of political funds involving Yuko Obuchi, the faction’s previous choice for LDP president. Currently, the Shukan Asahi reports that Motegi is the Nukaga faction’s candidate of choice.

Fumio Kishida, who serves as Foreign Minister, is the Kochi-kai group’s choice to lead the party. He supported Abe in his 2015 bid for presidency, but is expected to mount his own campaign in 2018. Outlying candidates include Shigeru Ishiba and Seiko Noda, who vocally oppose Abe, have not yet been unable to secure enough support to overtake him, as the Shukan Asahi reports.

The magazine observes that both Ishiba and Noda see an opportunity after the Upper House election next summer. The LDP is expected to face an uphill battle in this election due to the unpopularity of the security and TPP legislation with the prospects of losing many seats. Prime Minister Abe may step down and the LDP may hold its presidential election in the autumn. er. The Abe Cabinet aims to enact the security bills within September. There are also concerns over possible economic downturn, as preliminary GDP figures for the April-June quarter released recently showed negative growth.

Although Abe has successfully defended his position in the LDP, rumors of his illness, coupled with a field of aspiring leaders, makes future party infighting a strong possibility. Individual approaches to upcoming contentious issues, including collective self-defense, may reveal more about the LDP’s future and stability.

As the Shukan Asahi concludes: "The LDP is still controlled solely by Abe. But possible successors to Abe are seeking an opportunity to become next prime minister. When will the signal gun be fired for the start of race for premiership?"
at September 11, 2015