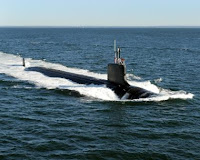 On Saturday, July 31 the US Navy will commission its seventh Virginia-class nuclear submarine, the Missouri, entering the 7,800-ton ship into service at a ceremony in Groton. Secretary of Defense Robert M. Gates, Secretary of the Navy Ray Mabus and Chief of Naval Operations Adm. Gary Roughheadwill be in attendance at the commissioning ceremony of USS Missouri. You can watch the ceremony live HERE.

The sub was partially built by Groton-based Electric Boat and will be based at Naval Submarine Base New London, joining three other Virginia-class subs there. A fifth, the North Carolina, is transferring to the sub base in Hawaii.

The most famous USS Missouri, an Iowa-class battleship, was commissioned in June 1944. About 15 months later it was the site of Japan's surrender to the Allied Forces, which ended World War II. The battleship was finally decommissioned in 1992 and is now a museum in Hawaii. The Battleship Missouri Memorial is located a ship’s length from the USS Arizona Memorial.
at July 30, 2010