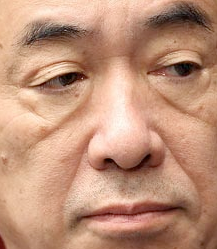 Stung by the loss of his party’s Upper House majority and his dramatic decline in popularity, Japanese Prime Minister Naoto Kan (right) is struggling to find the Calamine lotion.

He is now more sensitive to public opinion and more realistic about the domestic constraints on his actions. Not unexpectedly, Kan’s promise to resolve the Futenma relocation by the end of August is unrealistic and unlikely to soothe raw nerves any time soon.

The public continues to disapprove of how the DPJ is running the country. In the latest Yomiuri poll (July 14), the support rate for the Kan cabinet plummeted seven points from the July 2-4 survey to 38%, with a majority, 54%, welcoming the DPJ’s election loss. The non-support rate soared 13 points to an alarming 52%, overtaking the approval rate for the first time. Only a month ago (June 8-9 survey), just after Kan took over, the support rate was a healthy 64% and the non-support an insignificant 25%.

The DPJ’s support rate has also taken a beating, dropping from 34% to 28% in just one week. In contrast, the support rate for the Liberal Democratic Party (LDP), the anointed "winner" in the recent election, jumped from 18% to 24% in a week. Support for the splinter party, Your Party, which picked up 10 seats in the election, placing it on the political map, jumped from 5% to 12%. Asked about the DPJ’s loss of 10 seats in the election, 38% of the public blamed it on Prime Minister Kan’s remarks about hiking the consumption tax, but a significant 31% said they were dissatisfied with the party’s campaign manifesto.

According to press reports, rather than confront the wrath of Okinawans opposed to any relocation of Futenma inside the prefecture, Tokyo is now pressing for an ambiguous late-August decision, veering away from any specific plan. Foreign Minister Katsuya Okada told the press on July 13 that the government would work to rebuild confidence in it in Okinawa even if it takes time. Chief Cabinet Secretary Sengoku separately added that he did not expect a final resolution of the Futenma relocation by November, when President Obama is scheduled to visit Japan. On July 16th, Okada told the press "I would like to continue mulling over whether to announce it publicly, or not to disclose it even if it becomes clear effectively."

Okinawa is now represented in the Upper House by a newly elected lawmaker from the Liberal Democratic Party, Aiko Shimajiri. She won not because of her association with the party that brought Okinawa the Futenma dilemma, but because she promised to do what the DPJ could not deliver: completely reject any Futenma relocation plan that left the facility in Okinawa. She also went one step further, promising in her campaign to follow the will of the prefecture to “establish a peaceful Okinawa with no bases,” and to “return to the starting point.” She says she plans to visit Washington soon to deliver that anti-base message.

In addition this new and unique LDP voice, Social Democratic Party head Mizuho Fukushima, who kept repeating her Futenma solution of kengai, kokugai (out of the prefecture, out of the country) during the election campaign, convinced an overwhelming number of Okinawa voters to choose her party in the proportional representation race. The SDP led the pack with 126,400 votes or 22.7% of the total, compared to the mere 3.8% of the vote that it tallied in the rest of the country. It unseated, ironically, the incumbent, a peace activist from the DPJ, who later bitterly denounced his party for its “betrayal” of Okinawa.

This angry mood across Okinawa is likely to affect the outcome of the Nago City assembly election on September 12 as well as the gubernatorial election on November 28. These are likely to pit an anti-base activist against the moderate incumbent. It is still unclear how much the rest of Japan is sensitive to the issues on Okinawa.

The Japanese people are feeling injured and less tolerant of central government prescriptions. Little wonder that the Kan government wants to postpone or not even announce its final decision on Futenma. Left as is, the open sores are unlikely to improve and could become inoperable. The inevitable clash of political forces in Japan has merely been delayed.

In response, the US-Japan Alliance will either have to restructure and adjust or cease.