Is the RMB really "re-pegged" to the US$?

China's premier, Wen Jiabao, criticized the United States last week for its insistence that China revalue its currency, the RMB. A great deal of western commentary has declared that in the summer of 2008, when storm clouds appeared ahead of the global financial collapse, China "re-pegged" its currency to the U.S. dollar, fundamentally changing its exchange rate policy.

Here is how the Financial Times put it as it told the story of Premier Wen's criticism: "The renminbi has been repegged to the US dollar since mid-2008, putting on ice the Chinese currency’s tightly managed rise during the previous three years against the dollar." (Patti Waldmeier, "Wen labels renminbi pressure 'unfair,'" Financial Times, 30 November 2009)

But there is another way to look at Chinese exchange rate policy. It suggests that the "re-pegged" story isn't the whole story, and may not be the real story at all.

By the same token, if the euro were suddenly to weaken against the dollar, basket guidance would say that China should devalue the RMB against the U.S. dollar, although not as much as the euro.

It turns out that in July 2008, as panic over global financial conditions spread, the euro did in fact suddenly stop strengthening and started weakening against the dollar--by quite a lot. But did the RMB then follow basket guidance and reverse course, devaluing against the dollar? No, it did not. Instead it just held steady to the dollar.

Why didn't it devalue against the dollar? Who knows. But a good guess is that China's leaders were concerned how this would be interpreted in America, especially during a presidential election campaign in which China hadn't been a major issue. As a consequence, the RMB ended up revaluing much more, on a trade-weighted basis, than its basket guidance would have indicated. The main indicator of this decision was a strong RMB revaluation against the euro.

Instead of a "re-peg" to the dollar, the more likely Chinese policy is to follow basket guidance unless that guidance says to devalue against the dollar. Under such conditions, the policy would be to stay with the dollar and not follow the euro down. Ultimately, if and when the euro re-strengthens back to the point where it was in July 2008 (with some more minor adjustments for the Japanese yen) and then continues to revalue even further, the RMB would resume its revaluation against the dollar. This point is somewhere around US$1.60 per euro. So, to summarize the likely actual Chinese policy, it was and is basket guidance, unless the basket says devalue against the dollar.

The following diagram illustrates the relevant relationships between the euro and dollar exchange rates with respect to the RMB. 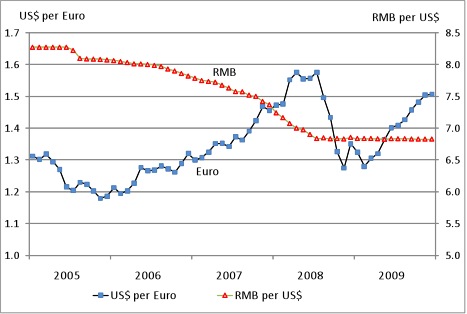