Celebrating the Taiwan Relations Act of 1979


On March 6th, the Taipei Economic and Cultural Representative Office in Washington, DC held a reception for members of congress, diplomatic corps, and the Washington think tank community inaugurating its series of events to commemorate the 40th anniversary of Taiwan Relations Act.

Special guest, was 100-year old former Congressman Lester Wolff (D-NY) who one of the authors of the Taiwan Relations Act. A number of Senators and Members of the House of Representatives who were unable to attend sent their congratulatory messages by a pre-recorded video clips. [see above] Speaker of the House Nancy Pelosi (D-CA) also sent a congratulatory letter.

April 10th is the anniversary of the enactment of the TRA. In a forthcoming blogpost we will list the upcoming TRA events. 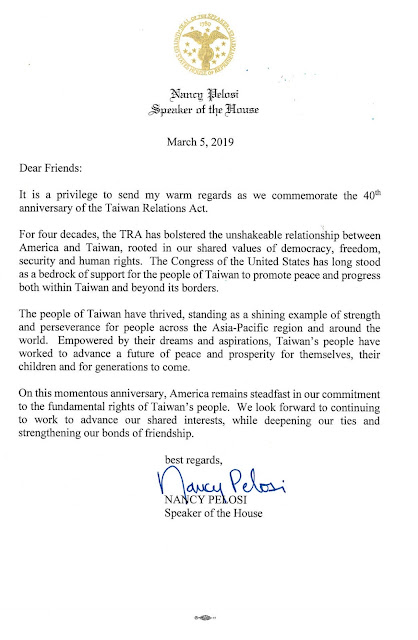