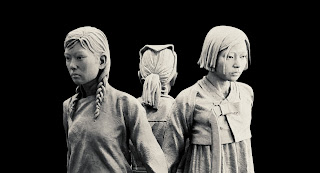 Blocking comfort women documents from UNESCO’s Memory of the World Register could do Japan more harm than good.

By Edward Vickers, Professor of Comparative Education at Kyushu University, Japan. He is a member of the War Memoryscapes in Asia Partnership (WARMAP), funded by the Leverhulme Trust and coordinated by Mark Frost of Essex University. His latest book, Education and Society in Post-Mao China, was published by Routledge in 2017.

October was a good month for Japanese Prime Minister Shinzo Abe. Following his crushing electoral victory came a further triumph highly prized by Japanese rightists: the stymieing of attempts to inscribe documents relating to “comfort women” — wartime sex slaves of the Japanese military — on UNESCO’s “Memory of the World Register.”

An international alliance had submitted an application, “Voices of the Comfort Women,” in May 2016. But on October 27, inscription was declared “postponed” pending “dialogue” between the applicants and the Japanese government.

This decision is portrayed by Abe’s supporters as endorsing his efforts to close the book on the wartime past, and restore Japan to a “normal” role in world affairs. But does Japan’s UNESCO diplomacy really serve this end? Or does it rather ensure that controversy over wartime atrocities continues to fester, imperiling Japan’s security by lending ammunition to anti-Japan nationalists?

Over many decades, Japan has invested heavily in UNESCO, which it joined in 1951, five years before becoming a full member of the UN itself. From 2011, following withdrawal of U.S. funding, it became the biggest contributor to the organisation’s budget. UNESCO has served as a rare arena for Japanese diplomatic leadership; it was largely at Japanese instigation, for example, that UNESCO declared 2004-2014 the “Decade of Education for Sustainable Development.” Through such initiatives, Japan built up a reputation for responsible global citizenship.

But the Abe administration claims that in recent years other states — specifically China and South Korea — have sought to “politicize” the organisation, in particular its heritage listing process. In 2015, China secured “Memory of the World” inscription for documents relating to the 1937 Nanjing Massacre. Shortly thereafter, Japan suspended its financial contribution to UNESCO in protest.

Japan also sought to buy South Korea’s silence over the “comfort women” issue. A bilateral agreement in December 2015 offered compensation to surviving victims, in return for the South Korean government’s defunding campaigns for further recognition — specifically the application to UNESCO. But far from resolving tensions, the agreement exacerbated them. This was due not least to the blatantly disingenuous nature of the Japanese stance: half-hearted contrition for foreign consumption, alongside intensifying revisionism within Japan itself. Under Abe, discussion of “comfort women” has all but disappeared from school textbooks.

This does not mean that the history of wartime sex slavery simply pits Japanese villainy against Korean or Chinese victimhood. As the South Korean scholar Park Yu-ha has controversially pointed out, Chinese and Korean gangs trafficked women for the Japanese military; some girls were sold into prostitution by their impoverished families; and while most were tricked or coerced, there were exceptions. Trafficking in women for sex is nothing new, and continues across Asia and beyond. For example, China’s skewed sex ratio — a by-product of the One Child Policy — is today fueling an upsurge in trafficking along its southern borders.

However, the “comfort women” system was a particularly coordinated, institutionalized, and brutal form of sexual exploitation. Moreover, for many campaigners, the continuing abuse of women today is precisely the point. The activists at the Women’s Active Museum of War and Peace in Tokyo, for example, see a failure to acknowledge the iniquity of the “comfort women” system as symptomatic of the entrenched chauvinism of Japanese society. For many, securing recognition for wartime sex slaves is partly about drawing attention to the widespread persistence of the kinds of attitudes toward women that underpinned that system. This aim would seem eminently consistent with UNESCO’s humanitarian mission.

But UNESCO is an organization in crisis. In parts of its decrepit Paris headquarters, rusty reinforcing rods can be seen poking through the crumbling concrete. A lack of UNESCO funding left the German government to cover my group’s travel costs when recently visiting to launch a UNESCO-commissioned report on education in Asia. One official whispered fears that Japan might follow the United States in withdrawing completely. Meanwhile, Chinese influence is rapidly filling the void, leaving many UNESCO insiders desperate somehow to restore political balance.

This is the context for the recent “Memory of the World” decision. In 2015, a related Chinese application was turned down, despite the fact that the International Advisory Committee adjudged the submitted documents to have “met the criteria” for registration. In light of the transnational nature of the issue, the committee recommended that groups in various affected countries (not just China) jointly submit a more comprehensive collection of documents. Hence the subsequent South Korean-led 14-country application, the documents submitted by which were described earlier this year by UNESCO’s Register Sub-Committee as “irreplaceable and unique.”

Japan was meanwhile fiercely pressing for revision of the criteria for inscription. It finally secured a commitment to pursue “dialogue” in cases where an application is contested — the principle cited in the recent “postponement” decision. However, as the alliance supporting registration noted in an October 31 press release, this potentially amounts to a perpetrator’s veto: “It means that documents related to colonial regimes should be negotiated with the colonizers, and the damage suffered by victims of war should be discussed with the perpetrators.”

UNESCO’s eagerness to placate Japan is apparent elsewhere, too. This July, the island of Okinoshima off the coast of Kyushu was declared a “World Heritage Site,” along with related shrines on the mainland. The island is a repository of thousands of ancient artifacts from South Korea, China and beyond, mysteriously deposited over the centuries. Intensive Japanese lobbying persuaded the UNESCO committee to override an expert recommendation to register only the island itself, and agree instead to inscribe the mainland sites as well. Moreover, the official description of the site notes neither a “traditional” ban on women landing on Okinoshima, nor the island’s association with nationalistic annual commemorations of a nearby 1905 naval battle.

Not all recent decisions have gone Japan’s way. An application to inscribe as “Memory of the World” documents relating to Sugihara Chiune, the wartime Japanese consul in Latvia who helped save several thousand Jews, was rejected. The reasons were not divulged, but celebrating an instance of wartime Japanese humanitarianism while denying inscription to “comfort women” documents was probably seen as politically unwise.

Given threats from a nuclearizing North Korea and an increasingly assertive China, the project of pursuing a more “normal” constitutional position for Japan’s armed forces has much to recommend it. However, to seek constitutional reform alongside historical revisionism is both ethically indefensible and strategically insane. It needlessly sullies Japan’s international reputation and awards easy propaganda points to nationalists elsewhere intent on portraying Japanese as unrepentant militarists.

And Japan’s actions threaten UNESCO’s reputation, too. In squandering much of the goodwill acquired over decades of involvement in UNESCO, it has exacerbated the very process of “politicization” it claims to lament. Denying inscription to records of wartime atrocities brings discredit both to Japan, for its bullying and mendacity, and to UNESCO, for buckling under pressure and subverting its own processes.

The international alliance has pledged to continue its campaign to inscribe “comfort women” documents, declaring its readiness to enter whatever form of dialogue UNESCO mandates. It remains to be seen whether Japan will approach such an exercise as more than a means of blocking and obfuscation. But for truly meaningful dialogue with its neighbors over this and other aspects of the wartime past, what Japan needs first of all is a long-overdue dialogue with itself.
at November 26, 2017