America In the Age of Trumpism 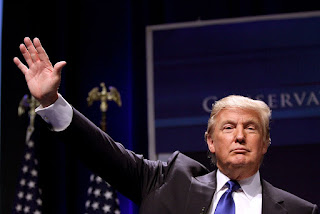 By Michael Krepon, Co-founder of the Stimson Center and author of Better Safe than Sorry: The Ironies of Living with the Bomb. This article originally appeared in The National Interest on June 8, 2017

Henry Luce, the Time Life publishing magnate, wrote his editorial on “The American Century” in February 1941, trying to rally his fellow citizens to meet the challenges of a war that clearly lay ahead. Just as the U.S. entry into the first Word War turned the tide of battle, so, too, Luce argued, would America need to come off the sidelines to help friends in need in another conflagration. The American Century began in 1917, when President Woodrow Wilson sent doughboys to Europe. It ended in 2017, when President Donald Trump announced the U.S. withdrawal from the Paris climate pact.

There’s nothing subtle or slow-moving about the decline of America’s standing in the first months of the Trump administration. His “America First” sloganeering corrodes the ties that bind the United States from allies and friends. Democratic allies in troubled regions hearing Trump’s hectoring have concluded, as Germany’s Angela Merkel has articulated, that they must increasingly fend for themselves. Meanwhile, authoritarian leaders rejoice at the newest member of the club. The biggest winners of the Trump presidency are already clear: the coal industry at home and China and Russia abroad.

Never in the history of international affairs has such a modest investment by an adversary—hacking a political campaign—yielded such extraordinary returns. The Kremlin has already accrued large dividends in the form of weakened alliances and diminished U.S. international standing. On top of this, sanctions relief or other quid pro quos from Trump would be icing on the cake.

In fairness to Trump, many others share the blame for downsizing U.S. influence abroad. America’s hard power has been badly spent in the world’s backwaters, where tidal pools of sectarian and tribal hatred are sustained rather than dried up by the presence of U.S. expeditionary forces. The George W. Bush administration’s disastrous decisions to wage a long war in Afghanistan and a war of choice in Iraq can now be indefinitely postponed due to the ability of U.S. forces operating under rules of engagement that minimize casualties. But success remains beyond their ambit. Placing boots on the ground to prevent low-probability/high-consequence terror attacks on the U.S. homeland will be an endless mission. Ungoverned spaces are multiplying. Meanwhile, the contingencies whose outcomes will define U.S. power in the decades ahead are far afield from these quagmires.

During and soon after the Cold War, Americans basked in the notion that theirs was the “indispensable nation.” Three signature American projects that gave sustenance to notions of indispensability—and that undergirded U.S. influence abroad—have now fallen upon hard times. First, U.S. allies and negotiating partners have expected Washington to take the lead on reducing nuclear dangers and weapons. This project has stalled out. A major danger sign was the refusal of Republican senators to consent to ratify the Comprehensive Test Ban Treaty in 1999. Blockages have subsequently grown with Vladimir Putin’s push back against post–Cold War U.S. triumphalism and wider partisan division at home. Most Republicans on Capitol Hill are deeply suspicious of international compacts, instead placing their trust in freedom of action and the protection of national sovereignty. Nuclear dangers cannot be reduced under these circumstances except by military action or good fortune.

A second defining project for “the indispensible nation” has been to promote democracy abroad. This was what separated a fledgling nation of thirteen liberated colonies from the Old World, and what fueled Franklin Delano Roosevelt’s Four Freedoms to George W. Bush’s over-the-top second inaugural address. The democracy project is now in shambles, reflecting the jarring images of Trump’s first presidential foray into the world—sword dancing for autocrats and scowls for democratic leaders.

A third defining project of American leadership has been environmental protection, dating back to the establishment of the Environmental Protection Agency in the Nixon administration. After Trump’s executive orders and withdrawal from the Paris climate pact, this project no longer has U.S. Government backing. During this administration, Americans will demonstrate their exceptionalism by disregarding their president.

Taken together, the abdication of U.S. leadership on these three projects is akin to the Republican Party’s rejection of the League of Nations after World War I. The images that the United States now projects abroad are that of an unfamiliar country that has lost its way, that is mired in partisan division, that uses military power in diminishing ways.

The trumpeter of the American Century, Henry Luce, would recognize all too well his party’s drift toward nationalism and isolationism. The company he kept—men who conceived and implemented the Marshall Plan, the Bretton Woods Agreement, the United Nations and NATO—have passed on. Their ranks have not been replaced. The internationalist wing of the Republican Party has been decimated.

Nowhere is this vacuum on greater display than in the State Department, which has become a ghost ship anchored at Foggy Bottom. American diplomacy is in crisis. A novice has been chosen to take the helm. He has no officers, as deputy and assistant secretary posts are unfilled. In times of impending crises, he is operating under orders to reduce provisions and crew by thirty percent. Non-career ambassadors have been ordered to leave their posts. Their replacements are nowhere in sight. At present, over fifty ambassadorial posts are vacant, including South Korea, India, the United Kingdom, France, Japan, Germany, Italy, Afghanistan, Canada, Austria, Australia, Saudi Arabia and South Africa. Fourteen ambassadorial posts in Europe alone are vacant.

Raymond Aron wrote in Peace and War that crises have become the substitute of wars in the nuclear age, and that the outcome of crises would henceforth determine the rise and decline of major powers. Aron—like the rest of us—didn’t figure that the United States would be humbled daily by its own president rather than by a foreign power. As in previous challenges, solace is found on spending large sums on nuclear forces—this time to the tune of a trillion dollars over the next three decades. But recapitalizing the instruments of nuclear-war fighting won’t help if deterrence fails, as it occasionally does. The deciding factors will then be, as they have always been, proactive diplomacy, savvy crisis managers meriting great international respect, and usable conventional military capabilities.

Remedial steps are too numerous to mention, the most important of which will have to await Trump’s departure. But some Band-Aids can be applied quickly, particularly at the State Department and in key overseas posts. Experienced crisis managers can be deputized, if needed, and spending for diplomacy can be plussed up. All fixes will be temporary unless and until the Republican Party can revive its international orientation.
at June 09, 2017