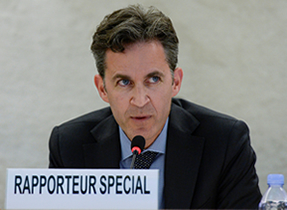 What is with Prime Minister Shinzo Abe’s arrogant disrespect for the United Nations?

Chief Cabinet Secretary Yoshihide Suga spread fake news by insisting that the U.N. Secretary General Antonio Guterres endorsed Japan’s much-maligned “comfort women” deal with South Korea even after his spokesman, Stephane Dujarric, who was in Italy with Guterres when he met Abe, emphatically denied this. The South Korean government reported that it confirmed with Guterres directly that he had not endorsed the deal. Suga’s disinformation may be aimed at discrediting the U.N. Committee Against Torture’s recent call for revisions of the comfort women accord. [See Government of Japan May 12, 2017 rebuttal]

David Kaye, a professor of law at the University of California-Irvine and special rapporteur for the U.N. Human Rights Council, called Abe out on his government’s incivility towards U.N. representatives. Abe is miffed that Kaye and other U.N. representatives have voiced criticisms about the erosion of press freedom and the freedom of expression, in addition to conspiracy legislation that threatens the right to privacy and the right to dissent. These are legitimate concerns widely shared by Japanese about how democratic norms and values are being sacrificed in favor of the surveillance state, and where Abe is leading the nation. [See Kaye 2017 Final report See 2016 Preliminary Observations]

As the Japan Federation of Bar Associations notes, the government is wrong to maintain that the conspiracy legislation is necessary for Japan to live up to its commitments under the U.N. Convention against Transnational Organized Crime. It is also wrong to claim that adopting the conspiracy legislation is necessary for Japan to gain access to intelligence about international terrorism. Scare-mongering about preventing terrorism at the 2020 Tokyo Olympics aims to distract attention away from the ongoing assault on civil liberties. The police already have the powers and laws needed to combat terrorism without handcuffing democracy.

In May, as tens of thousands of demonstrators around the nation decried the Draconian provisions, Joe Cannataci, the U.N. rapporteur on the right to privacy, expressed concerns about the sweeping nature of the powers granted that threaten the right to privacy. Cabinet secretary Suga dismissed Cannataci’s remarks, asserting that he was merely speaking in a private capacity. In fact, he was carrying out his duties. The government also denounced Kaye for doing his job, saying he “degrades the authority of the U.N. Human Rights Council.”

Kaye recently submitted his report on press freedom in Japan to the U.N. Human Rights Council. Kaye has been a target of government criticism since April 2016, when he submitted a scathing draft report that highlighted government intimidation of journalists, self-censorship and the press-club system, all of which enable the government to manage the mainstream news. The government engaged in damage control, arguing that Kaye didn’t meet the right people, didn’t understand the context and failed to give credence to official rebuttals.

At a recent Tokyo symposium sponsored by the Committee to Protect Journalists, Kaye cited the International Covenant on Civil and Political Rights’ Article 19, which protects the people’s right to know. This right is crucial to good governance and accountability, and is why it is essential to protect journalists, because they protect the public by letting them know what the authorities would rather they not know. Citizens’ ability to participate meaningfully in public life and hold government accountable, he argued, rests on the efforts of responsible journalists to access information and promote transparency. In a democracy the media watchdog must be able to bark, and to the extent it is muzzled, citizens’ democratic rights are threatened.

Kaye emphasized that the challenges to a free press are global and the forces of darkness are gathering as governments around the world justify restrictions on civil liberties in terms of combating violent extremism. Terrorism and public safety are typically invoked to muzzle the press, stifle dissent, curb civil liberties, arrest reporters, block access to the internet and adopt draconian surveillance laws.

In his final report, Kaye heralds “a high degree of freedom online,” but expresses concerns about the vaguely worded Specially Designated Secrets Law enacted in 2014, the potential for abuses and how it might impinge on freedom of expression given inadequate protections under the Whistleblower Protection Act. He also lodged a protest with the government after he “became aware of allegations that the government ordered intelligence community members to monitor at last one member of civil society who helped coordinate meetings.” For Kaye it was striking that most of the journalists who confided in him requested anonymity for fear of retaliation by their own management, highlighting the absence of any independent body to protect them from such reprisals.

Japanese journalists, media organizations and civil society groups told Kaye about threats to freedom of expression, including the “opaque and clique-plagued system of press clubs” that enforces norms of “access and exclusion,” self-censorship and access journalism. The latter encourages lapdog reporting to curry favor with those in power.

Kaye draws attention to broadcast regulations, pointing out that they are not independent from the party in power and are thus subject to abuse in ways that intimidate the media. He also reports about the apparent ouster of respected pundits from their broadcasting duties, and the spiking of stories and demotions of reporters as examples of the pressures exerted by the Abe government against its critics. Moreover, he notes allegations that the current political leadership has backed orchestrated campaigns of harassment targeting liberal critics, singling out the Asahi Shimbun in particular.

At the symposium Martin Fackler, former bureau chief of The New York Times in Tokyo, lamented that most Japanese journalists are company employees first, and avoid taking risks, and that media-wide solidarity and commitment to a professional ethos is lacking.

Regarding lapdog journalism, what are we to make of NHK and the Yomiuri helping Abe out over the Kake Gakuen vet school scandal? The Yomiuri’s effort to tarnish the name of Kihei Maekawa, a former top education bureaucrat who alleges Abe did a favor for crony Kotaro Kake, the school’s owner, is unseemly. Reports about Maekawa frequenting singles bars are irrelevant to the testimony Abe is trying to prevent him giving in the Diet on the issue.

Meanwhile, NHK shamelessly sidelined the story, giving short shrift to official papers implicating the prime minister’s office and focusing instead on Princess Mako. Fortunately, other media outlets are making these press poodles look decidedly lame, finally forcing NHK to find its journalistic backbone, at least on this scandal.
at June 14, 2017