Shinzo Abe and the arrogance of power 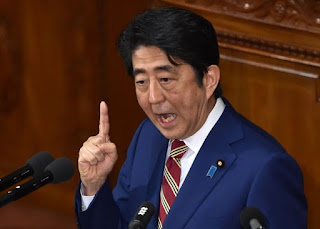 On Sunday [May 28th], Prime Minister Shinzo Abe overtook Junichiro Koizumi to become Japan’s third longest serving postwar leader. Ahead of him are only the 20th century political giants of Shigeru Yoshida and Eisaku Sato. Abe has used this time to leave a lasting imprint on Japan, transforming its security architecture and lending his name to Abenomics, his strategy for economic revival.
Abe’s strong leadership was initially welcomed by many who had grown weary of the succession of short-lived administrations. Yet, if there is a golden rule of politics, it is that power corrupts as hubris inflates leaders’ egos and they begin to conflate personal interests with those of the state. After five continuous years in office, Abe increasingly appears to be suffering from this affliction.

The most recent sign is the Kake Gakuen scandal in which Abe is alleged to have pressured the education ministry to approve the opening of a veterinary medicine department at a university run by his friend, Kotaro Kake. After an application period of just eight days, with Kake Gakuen being the sole applicant, the permit was the first issued in 52 years. On the basis of this approval, the school operator was given free land worth ¥3.68 billion, plus ¥9.6 billion in subsidies.

To make matters worse, the former vice education minister whose claims lend support to the accusations against Abe has been targeted by smear stories in the government-friendly Yomiuri Shimbun. This gives the impression that the Abe administration is seeking to cover up its influence peddling through the intimidation of witnesses.

This scandal bears a striking resemblance to the recent Moritomo Gakuen case in which it is alleged that another private educational establishment used its connections with the Abe family to purchase a plot of land for less than 15 percent of its appraised value. This earlier scandal is made worse by the fact that Moritomo Gakuen is a nationalist organization that promotes prewar educational values and has been accused of hate speech against Chinese and Koreans.
Although the final truth about these scandals has yet to be revealed, the recurrent allegations raise concerns that Abe has become too comfortable in office and has begun to use the instruments of power to benefit his cronies and further his own radical views. This tendency has no doubt been encouraged by the contemporary weakness of opposition parties and the timidity of much of the media.

Voters have a tendency to tolerate a degree of corruption as long as it is accompanied by economic growth. In the case of the Abe administration, however, the concern is that the pursuit of self-interest is distracting from the crucial task of rejuvenating the listless economy. The stated purpose of Abenomics was to use monetary easing and fiscal stimulus to create breathing space to implement needed structural reforms. Increasingly, however, it is becoming clear that this economic respite is being frittered away on Abe’s ideological mission to reshape the Japanese state.

A clear example of this is the government’s handling of the controversial conspiracy bill, which criminalizes the plotting and preparation of crimes even if they are never carried out. Applying to 277 types of crime, there are widespread concerns that the law will be used to justify widespread surveillance of activist groups, including labor unions and political parties. Despite public opposition and direct criticism from the United Nations special rapporteur on the right to privacy, the Abe administration high-handedly forced the bill through the Lower House on May 23.

Similar disregard for the views of others is evident in Abe’s attitude toward the Constitution. Although it is the Diet’s prerogative to initiate constitutional revision, on May 3 Abe declared that a new constitution should come into effect by 2020. He subsequently specified that it is his desire to amend Article 9, the current Constitution’s famous war-renouncing clause. This unilateral intervention caused consternation even within Abe’s own Liberal Democratic Party. The opposition Democratic Party was also incensed when Abe refused to answer questions on the issue in the Diet, dismissively telling them to read the interview he had given to the Yomiuri Shimbun.

The proposed timing of the amendment also reeks of egocentrism. While the prime minister weakly claimed that the change should be hurried through by 2020 to coincide with the Tokyo Olympics, it was clear to all that his priority is to enforce the first-ever change to the Constitution while he is still in office. There can be no clearer example of Abe’s willingness to put his own desire for legacy above the nation’s interests.

Having changed the LDP’s rules to permit him to run for party president for a third term, Abe could potentially continue as prime minister until September 2021. If this is the case, he is currently little over halfway through his stay in office. Given the whiff of corruption and arrogance already emanating from his administration, supporters of liberal democracy must worry about what the next four years portend.
at June 09, 2017