Who Spends Time with Abe? 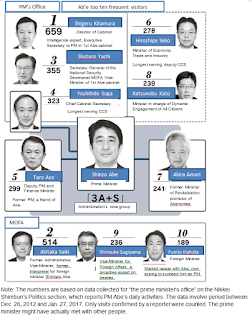 Who are the frequent visitors to the Prime Minister's Office

How does Prime Minister Shinzo Abe spend the day as the head of the government? A look at the prime minister’s tightly scheduled meetings throughout the day will give us a picture of where the administration’s priorities lie, as well as Abe’s relationship with people surrounding him. Using data accumulated for the Nikkei Shimbun’s column “Prime Minister’s Office [Shusho Kantei]” that appears daily in the paper’s Politics section, we have done an analysis of Prime Minister Abe’s four years since his return to the premiership.

“Abe’s most frequent visitor” in the past four years has been the cabinet’s top intelligence official, Director of Cabinet Intelligence Shigeru Kitamura. Kitamura reports to Abe on confidential matters ranging from diplomacy and security to elections that the cabinet intelligence and research office compiles. Kitamura is often seen visiting Abe multiple times a day. Occasionally, he carries necessary information to the PM at his vacation home in Yamanashi Prefecture. Kitamura had worked under the first Abe administration as an executive secretary to the prime minister and supported Abe through that challenging period.

A reporter, who is assigned to cover the prime minister’s daily activities, waits at the door to the Prime Minister’s Office [Kantei] and ask everyone who goes through the door whether he/she met with Abe. Kitamura always tells the reporter “yes” but nothing else.

The second most frequent visitor has been the former vice-minister for foreign affairs Akitaka Saiki. Abe has known Saiki well ever since he served as an English-language interpreter for Abe’s father Shintaro Abe when the senior Abe was foreign minister. Saiki, the foreign ministry’s top administrative official, frequently visited the Kantei to keep Abe abreast of events and receive instructions. In this way, the Abe administration emphasizes Abe’s direct control of the foreign ministry. Abe’s weight in negotiations with foreign counterparts has been increasing, and Japanese diplomats, more than ever, cannot take actions without Abe’s instructions.

The third was Secretary General of the National Security Secretariat Shotaro Yachi. He served under the first Abe administration as a foreign vice-minister and is described as Abe’s brain in diplomacy. In the U.S., Russian, and Chinese governments the organization that reports direct to the head of the state wields influence. One example is the U.S. National Security Council. Yachi has acted as the counterpart to these organizations, and has arranged Abe’s summit diplomacy from behind the scenes.

Meetings between Abe, Kitamura, Yachi, and senior officials from the foreign and defense ministries are held regularly, generally twice a month. The highest-ranking uniformed officer of the SDF, Joint Chief of Staff Katsutoshi Kawano has also been a member of that group. The meetings provide a framework for discussing matters significant to the country’s security policy.

Among politicians, Chief Cabinet Secretary Yoshihide Suga has been the fourth most frequent visitor, followed by Deputy Prime Minister and Finance Minister Taro Aso. Suga is often in attendance when Abe meets with important visitors. Aso comes with senior officials from the finance ministry for reporting, then usually stays behind to talk with the prime minister alone. While the ministry officials are there, the meeting revolves around the government’s financial policy. During their private conversation, Abe and Aso likely discuss and exchange opinions about political decision making.

Abe, Aso, Suga and the former Minister of Economic Revitalization, Economic and Fiscal Policy Akira Amari, the so-called 3A+S, were the core of the Abe administration. Since Amari resigned the ministerial post in 2016 as a result of a political-fund scandal, the “2A+S” has been in charge of running the administration.

The sixth most frequent visitor, Minister of Economy, Trade and Industry Hiroshige Seko (former deputy chief cabinet secretary, Upper House) and the eighth, Minister in Charge of Empowerment of All Citizens Katsunobu Kato (former deputy chief cabinet secretary, Lower House) had been regulars at the prime minister’s office during their terms as deputy CCS. On mornings of the day Abe is scheduled to go to the Diet, both houses’ deputy CCSs participate, without fail, in a Diet preparation session for the prime minister.

News reporters in charge of the prime minister must remain near the entrance to the Kantei when talking to people and are not allowed to go inside rooms. Therefore, if a person who works inside the Kantei meets and talks with the prime minister, that meeting may not appear in the “Prime Minister’s Office.” According to a high-ranking government official, a meeting is held every day between the prime minister, the chief cabinet secretary, deputy chief cabinet secretary, and executive secretary to the prime minister in charge of policies. By meeting every day, the core members of the administration at the Kantei confirm basic policy directions and avoid inconsistent remarks. Even without a particular agenda, just meeting with each other regularly gives a sense of unity.

Abe’s office is on the same floor as Suga’s, increasing the chances they meet much more often than what is reported.

The Ministry of Foreign Affairs had the highest number by far of visits to the prime minister’s office, due to the many significant diplomatic exchanges that occurred in 2016, including the Ise-Shima G7 Summit in May and the Japan-Russia summit meetings.

If we only look at the Administration’s fourth year, the defense ministry’s Director General for Defense Policy Satoshi Maeda was the fifth most frequent visitor. It reflects the weight the administration placed on managing the threats posed by an escalation of North Korean nuclear missile development and Chinese maritime advancement in the South and the East China Seas.

Meetings held with finance ministry officials have been slightly fewer than in past administrations, according to a source close to the prime minister. Although METI officials did not come to the Kantei as much, Takaya Imai, an executive secretary to the prime minister (policy) and a former METI bureaucrat, has likely been acting as a bridge between Abe and the ministry and helped Abe exert his influence. Meanwhile, the cabinet office is taking the initiative in the policy of the dynamic engagement of all citizens and work-style reform to increase its leadership presence.

Lunch and dinner meetings are good for developing friendly relationships. Besides the Kantei visitors, the Nikkei Shimbun looked into the prime minister’s favorite restaurants and dinner partners.

The most frequently used restaurant has been “ORIGAMI”, a restaurant in the Capitol Hotel Tokyu. So far during the second Abe administration, the prime minister has dined at the restaurant a total of 40 times. A majority of his dining partners have been people close to Abe such as executive secretaries and Chief Cabinet Secretary Suga. It seems he uses ORIGAMI when he wants to have a casual dinner meeting.

The prime minister’s favorite choice from the menu is pork rib ramen noodles, priced at 2,730 yen including tax. Last December, former Osaka mayor Toru Hashimoto, currently a legal and policy advisor to the Nippon Ishin no Kai, joined Abe for a steak lunch. The hotel has many exits for vehicles, making it easy for a guest to leave without being seen by the press.

Traditional Japanese-style restaurants [ryotei] have generally been chosen for meetings with business leaders. One of the venues is Arisugawa Shimizu, a Japanese restaurant in Minamiazabu, where members of Sakurakai, a high-powered business group, frequently gather. Yoshiyuki Kasai, the chairman emeritus of JR Tokai, and Shigetaka Furumori, the chairman and CEO of Fujifilm Holdings, belong to Sakurakai. The group has been a loyal supporter of Abe since before his first premiership.

Fukudaya, a Japanese restaurant in Kioicho, is where the prime minister regularly meets with Takashi Imai and Hiroshi Okuda, the chairmen emeritus of Keidanren.

When meeting with people from the entertainment industry, the prime minister often chooses more fashionable venues. He and actor Masahiko Tsugawa are friends who celebrate each other’s birthdays. They eat together with other people from the industry at Italian restaurants and the like. Abe is said to enjoy hearing stories from a community with which he has less frequent contact.

Dinner with Tsugawa often can last for hours. On Jan. 5, they talked for as long as three hours and 25 minutes. The prime minister’s dinner meetings generally end within a couple of hours. But when Abe is with close friends and family, the gathering tends to last much longer.

Before his return to the premiership, Abe has determined to accomplish three things every month--conduct an overseas visit, visit affected areas of the Great East Japan Earthquake and play golf.

Keeping the pace of almost once a month, Abe has conducted totally 50 times overseas visits under the banner of “diplomacy that takes a panoramic perspective of the world map”. As many as 66 countries and regions has been visited. He takes full advantage of the Golden week and summer during the Diet recess.

Concerning his hobby golf, Abe plays it several days in a row during vacations and so far has played 56 times. Though his score of Golf has not been revealed as a state secret, a person who played with him said it was “91”. Chairman of Japan Business Federation (Keidanren), Sadayuki Sakakibara, who often plays with Abe, is said to be better at golf than him. The prime minister has two favorite golf courses, one located in Chiba prefecture and the other in Kanagawa prefecture, and three favorite courses in Yamanashi prefecture, where Abe has his villa.

Spending Year-end and New Year’s holidays at Grand Hyatt Tokyo in Roppongi with his relatives is a standard routine every year. Abe is a regular customer of “Nagomi Spa and Fitness”, and has been there 67 times since his second term. Therefore it is understood that he does his health management there once in 22 days.

Abe never fails to ensure health check. He gets a full medical check in Spring and Autumn every year, and sees a dentist almost once in a month. Mostly he goes to the dentist in the first Congressman Hall of the House of Representatives during the intervals between weekday official duties.

Abe cherishes his friendship with old friends. He frequently participates in the gathering of Keisei Gakuen, which he commuted to from elementary school to university. He frequently meets with friends he made during his study in the U.S. after graduation from university. He tends to relax during mealtime with his family and friends, and sometimes greets reporters, who are assigned to cover the prime minister’s daily activities, by saying “Otsukaresama”.

Beyond the Right to Know

Regarding media coverage of the prime minister’s daily activities such as meeting opponents, Tokyo Governor Yuriko Koike has pointed out “it’s beyond the public’s right to know” when she was a Member of the House of Representatives. The U.S. media don’t seem to have detailed schedules of the President Trump. Also, President Xi Jinping is doing what or where right now is confidential information in China. Reporting the prime minister’s movement with high transparency is significant for monitoring power. We would like to continue to keep track of the prime minister.
at February 09, 2017