Trump and South Korea: It's Awkward 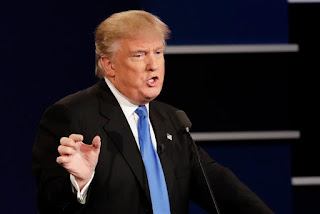 President Trump's January 30 phone call to South Korean prime minister (and acting president as of December 9) Hwang Kyo-ahn, reportedly spelling out the U.S. "ironclad" commitment to South Korea, came at a particularly opportune moment. Likewise can be said for the decision of Secretary of Defense Jim Mattis to schedule his first official trip abroad to South Korea (and Japan) last week. The reason: leadership circles in Seoul and Korea-watchers in Washington have had increasing jitters over the fact that South Korea has been largely paralyzed by a domestic political crisis just as the newly arrived Trump Administration undertakes the formulation of its Asia policy. The concern is that a new, four-year policy will be cemented in place in Washington within the next six months while South Korea is still embroiled in political turmoil, with the possible removal of a president to be followed by a 60-day snap election.

The sidelining of South Korean president Park Geun-hye since her impeachment by the National Assembly late last year prohibits her from engaging in any official duties, including meeting with or even contacting other world leaders to advocate for issues of national importance to South Korea. These issues include not only the escalating North Korean nuclear threat but a number of alliance and bread-and-butter matters as well. Until her ultimate fate, including possible removal from office, is determined by South Korea's Constitutional Court, which could take up to six months, she will remain a virtual prisoner within South Korea's presidential mansion, the Blue House. A judicial decision, however, could come as early as March.

In the meantime, Asia's other main actors, including Japan's prime minister Shinzo Abe (the first foreign leader to call upon the President-elect at Trump Tower), China (through its energetic advocate Henry Kissinger's renewed shuttle diplomacy between Beijing and Trump Tower) and Taiwan, (through a precedent-changing phone call from its president to then President-elect Trump), will have made their own priorities crystal clear. And while Trump's publicly avowed renewed commitment to Seoul is soothing, a number of outstanding issues indicate potential difficulties ahead for the alliance.

President Trump made the issue of greater cost-sharing for stationed U.S. forces (there are approximately currently 28,500 in South Korea) a central issue of his presidential campaign. During a presidential debate, Trump declared, "We defend Japan. We defend South Korea. We defend Saudi Arabia. We defend countries. They do not pay us what they should be paying us because we are providing a tremendous service and we're losing a fortune." The Diplomat carried an article on January 21 indicating that. "Seoul pays around half of the overall cost of stationing U.S. forces in South Korea, roughly $821 million in 2016."

The next negotiations on the level of cost sharing under the US-ROK Special Measures Agreement (SMA) for the 2019-2023 period are set to begin later in 2017. Seongnam Mayor Lee Jae-myung, a liberal presidential aspirant if a snap election is called, indicated to the Korea Times on January 5 that U.S. pressure for an increased level of cost sharing could become a campaign issue, stating that "South Korea is actually paying more than Japan and Germany," both of which have a U.S. forces presence.

Another area of potential friction in the U.S.-South Korean alliance would involve moves by the Trump Administration to renegotiate some of the terms of the US.-South Korean free trade agreement (KORUS FTA). This trade pact, which took effect in 2012, was hailed as "the second-largest US FTA" (after NAFTA.) Voice of America reported on July 28 of last year that then candidate Trump had referred to KORUS FTA as "a job killing deal." Matt Blunt, the president of the American Automotive Policy Council, was quoted in the same news report as stating that "there is no question the Korean marketplace is one of the most difficult for any automaker to export into, in the world." A particular focus of concern for the Trump administration has been automobile issues, since it was blue-collar voters in the automobile-producing states of Michigan, Ohio, and Wisconsin who propelled the President to victory. These voters, previously largely Democratic party supporters, responded to the campaign promise to stop "the stealing" overseas of American manufacturing jobs. During the KORUS FTA negotiations, automobiles and automotive parts were also key concerns of Members of Congress, including Democratic former Ways and Means Chairman (2010-11) Sander Levin, who represents a district from the metropolitan Detroit area.

President Trump underscored the continued importance of automobiles as a trade and job creation issue during a January 24 White House meeting with the chief executives of the big three American automakers. He urged them to build more cars in the United States, reminding them of his previous threat to impose 35 percent tariffs on imported automobiles, a considerable percentage of which are made in South Korea (although Korean automakers also operate plants within the United States.)

Cooperation between America's main northeast Asian allies, in the meantime, has hit another impasse as the long-smoldering issue of Imperial Japan's wartime sexual enslavement of mainly Korean "Comfort Women" has again emerged as a major controversy. The construction of a "Comfort Women" statue in the port city of Busan near the Japanese Consulate in December (there is already one opposite the Japanese Embassy in Seoul) led to the recall of both the Japanese Ambassador from Seoul and the Japanese Consul General from Busan. In addition, the announcement in mid-January by 34 members of South Korea's Gyeonggi Provincial Council that they will start a fund to build a "Comfort Women" statue on the disputed island territory of Liancourt Rocks/Dokdo/Takeshima by year's end led to a public condemnation by Japanese foreign minister Kishida Fumio. According to the Korea Times, Kishida told reporters on January 17 that "Takeshima is Japanese territory."

Additional fallout from deteriorating South Korean-Japanese relations included Seoul's cancellation of a proposed joint trilateral submarine drill with the U.S. and Japan. The proposed drill was obviously aimed at the growing threat from both North Korean submarines and nuclear weapons.

The December 2015 agreement on the "Comfort Women" issue between the South Korean and Japanese foreign ministers has become yet another heated target of Park's impeachment imbroglio. It is cited as an example by her growing number of critics of her insensitivity and alleged incompetence. President Park, for example, is being verbally criticized for never personally meeting with the "Comfort Women" survivors, as Pope Francis did during a visit to Seoul and as former Taiwan president Ma Ying-jeou did in Taipei. Given the level of importance of this issue to the average Korean voter, the lack of such a meeting is indeed a mystery. The rumor which swirled in Seoul that the 2015 deal included a verbal promise by the Park administration that the "Comfort Women" statue, which has gained a level of symbolic importance for many Koreans akin to the importance of the Statue of Liberty for many Americans, would eventually be removed from the vicinity of the Japanese Embassy led to a decision by South Korean students to provide around-the-clock protection for the statue to prevent its surreptitious removal in the middle of the night.

In the meantime, however, Abe's deft handling of the history issue with the American public, including his December visit to the USS Arizona Memorial at Pearl Harbor, and his scheduled February 10 summit meeting in Washington with President Trump has raised some disquietude in Seoul. The view is that Korean concerns over outstanding Pacific War history issues will be presented to the incoming Administration by Tokyo as mere emotionalism not worthy of the new Administration's serious attention.

A final issue involves South Korea's domestic politics. With the conservative governing party in South Korea suffering badly in last year's parliamentary elections and under a cloud with the presidential impeachment, the likelihood that the new South Korean president will be a progressive in the mold of the late Roh Moo-hyun has greatly increased. This was underlined last week when the strongest conservative contender, former UN chief Ban Ki-moon, unexpectedly dropped out of the race.

If a snap 60-day election is called this spring or summer, due to the Constitutional Court's removal of President Park from office, South Korea could be in the midst of a heated election campaign just as the new Trump Administration finalizes its Asia policies. The temptation of South Korean progressive presidential candidates to play the anti-American card to energize their electoral base over such issues as troop cost-sharing negotiations or the deployment of the U.S. Terminal High Altitude Area Defense (THAAD) system may prove strong. This has happened previously. Former House Foreign Affairs Committee Chairman Henry Hyde had to cancel a large Congressional delegation visit to Seoul during the December 2002 South Korean presidential election campaign due to heated anti-American demonstrations over the death of two school girls in a traffic accident involving U.S. military personnel. President-elect Trump's strong reaction in November to flag-burning by New Hampshire college students indicates that there would be far less tolerance for any South Korean students burning American flags than was displayed by then President George W. Bush in 2002.


With these multiple security, alliance, trade, and historical issues on the table for the new Trump administration, the current political paralysis in Seoul could not have arisen at a more inopportune time. And the fallout from South Korea's current political crisis points to potential rough sailing for the alliance in the months ahead.
at February 07, 2017