Return of the Morse Target 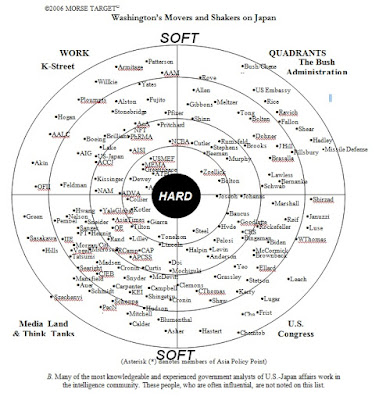 2017 MORSE TARGET
Who influences Trump Administration Japan and Asia Policy?
Since 1999, Dr. Ronald Morse former director of the Wilson Center's Asia Program has researched and examined the prominent influences on U.S. Japan policy. The result is the famous Morse Target. Individuals and organizations are identified and placed on a "target" that suggests how sympathetic (soft) or not (hard) they are toward Japanese foreign and trade policies.
As the Washington policy community knows, if you ain't on it, you ain't on it.
Dr. Morse will present his first draft of the 2017 Trump Administration Target
Monday, February 13 at the National Press Club at 2:00pm

Cookies to be served
All attendees will receive free the Target, its roster, and Dr. Morse's analysis
nonattendees can receive the Target after the event for small handling fee
SPACE LIMITED
REGISTER VIA THIS EMAIL

The Target’s creator is Dr. Ronald A. Morse, who worked in Washington, D.C. for 25 years. His positions between 1974 and 1995 included the Department of Defense, Department of State, Department of Energy, director of the Asia Program at the Woodrow Wilson International Center for Scholars, Special Assistant to the Librarian of Congress and vice president of the Economic Strategy Institute. He spent the latter part of the 1990s in Tokyo and taught at UCLA and the University of Nevada until 2005. He has been living in Las Vegas for the past decade writing about Japanese folklore studies and translating Japanese folk legends. He revised his book The Legends of Tono in 2008 and published a second volume of 300 legends (Folk Legends from Tono) in 2015. For this translation work (the Japanese equivalent of Grimm’s Fairy tales), he was awarded the Tono City Cultural Prize in 2012 and the Tono City Education and Culture Foundation's 42nd Tono Citizen’s Culture Award in 2016. Dr. Morse received advice on the Target from a wide range of Japan-watchers and works closely with Asia Policy Point, a Washington-based nonprofit research center that studies the U.S. policy relationship with Northeast Asia.
at February 03, 2017