Abenomics and the Slowdown of Japan's Economy 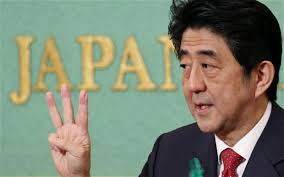 Going into the July 10 Upper House elections, Japanese Prime Minister Shinzo Abe has emphasized the success of his economic plan called "Abenomics." It consists of what he called “three arrows”: 1) bold monetary relaxation; 2) flexible application of fiscal stimulus; and 3) a growth strategy to spark private investment.  It is a clever public relations meme.

Launching the Upper House elections campaign on June 22, 2016, Abe spoke to a crowd in Kumamoto, a southern city struck by earthquakes and landslides in April.  He said, "This is an election to decide whether we will forge ahead strongly with economic policies, make Japan grow, the regions proper and everyone feel the benefits -- or return to a dark and stagnant era...Japan's economic is making steady progress and producing results.”  The Prime Minister cited Japan’s increasing tax revenue and tight labour market as evidence.

In May and June, the IMF, OECD, and the World Bank published reports examining the three arrows of Abenomics. They all forecast slower economic growth. The World Bank projected GDP growth at 0.7 percent in 2016 and 0.4 percent in 2017.” The IMF said that Japan would be the world's only shrinking advanced economy, projecting GDP growth of "0.5 percent in 2016 and –0.1 percent in 2017.” They note that consumption in Japan fell in “fiscal 2015, logging its second straight annual fall for the first time since comparable data began in fiscal 1994.” Price-adjusted real wages dropped for the fourth consecutive year in 2015. The average proportion of consumption spending in disposable income fell to 72.8 percent in January-March this year.

The World Bank assesses two arrows in Abenomics: monetary easing and fiscal stimulus in Global Economic Prospects: Divergences and Risks (174 pgs, June 7, 2016). It notes that negative interest rates, in contrast, “induced low inflation expectations and currency appreciation, raising concerns about the effectiveness of monetary policy.” On the fiscal side, “a supplementary budget with additional stimulus measures is expected to provide some support in 2016…but the rise of consumption tax to 10 percent, a 2 percent increase will balance out some of the growth effects.”

The IMF also reaches the conclusion that increasing the consumption tax in 2017 will affect growth in Japan, in World Economic Outlook, Too Slow for Too Long (230 pgs, April 12,2016). Commenting on the “third Arrow” of structural reform, the IMF suggests “the Japanese government to implement strategies to raise productivity, which are vital for tackling medium-term risks and raising potential output.” Income policies are needed to “bolster wage-price dynamics and increase monetary policy effectiveness.” Structural reforms should focus on “boosting the supply of labour (including of women), reforming labour markets to remove duality, further deregulating product and services markets, and supporting investment through corporate governance reform.”

Besides giving similar remarks on Abenomics, the OECD also doubts the positive results that mentioned by Abe. In the OECD Economic Outlook (316 pgs, June 1, 2016). The contraction of the labour market has only “a limited impact on nominal wage growth.” At the same time, low inflation expectations signal “inefficiency of the fiscal stimulus.”

In a June 22 editorial, "Abenomics and the Upper House election," the Japan Times questioned the success of Abenomics. The recovery that marked the first year of his new administration was short-lived. The nation’s gross domestic product, “which grew 2 percent in real terms in fiscal 2013, shrank 0.9 percent in fiscal 2014 and grew a sluggish 0.8 percent in fiscal 2015.” The underlying weakness in consumer spending — “particularly since the April 2014 consumption tax hike to 8 percent — dragged down growth, as the cost of living mostly rose faster than wage hikes” — which Abe boasts have been the sharpest since the turn of the century. And the reversal of the yen’s downtrend in recent months — “with the currency hitting 103-to-the-dollar range last week for the first time since August 2014 — threatens to pare the earnings of export-led major firms that had been inflated by the weak currency.” But the writer concludes:

Neither trumpeting Abenomics as if it’s a cure-all or denouncing it as a failure will be constructive. The Upper House election should let voters hand down their judgment.