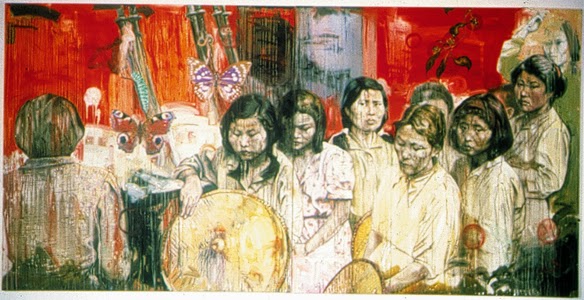 Japanese Prime Minister Shinzo Abe was interviewed by Washington Post Editorial Page writer David Ignatius in late March. The Prime Minister's press aide emphasized to Mr. Ignatius that it was significant that Abe had used the expression "human trafficking" in regard to the Comfort Women. That may be, but not for the reasons the Office of Prime Minister believes. Below is an analysis of Abe's use of one of the two Japanese expressions for "human trafficking" in this context.

Abe’s use of the vernacular expression jinshin-baibai for “human trafficking” was intended to be ambiguous. On March 28th, the Sankei Shimbun quoted an unnamed “high-ranking government official” as saying that jinshin-baibai [human-body selling/buying] “which means selling and buying of human bodies like chattel,” as the paper explains, does not imply/include forcible recruitment.” The paper concludes that the Prime Minister meant to draw a line between his view that parents sold their daughters to brokers and the forcible “recruitment” of girls by members of Imperial Japan’s military and government officials. Abe purposely avoided Japan’s formal expression of human trafficking (jinshin torihiki) to avoid connection to the internationally-accepted legal  definition (which Japan agreed to in 2005) that includes coercion. He continues to deny state responsibility. Further he is hitting back at a March 2nd statement by the US State Department, “The trafficking of women for sexual purposes by the Japanese military during World War II was a terrible, egregious violation of human rights” that clearly ascribes responsibility to the Japanese state.

Prime Minister Shinzo Abe’s use of the phrase “human trafficking” in his March 28th interview with the Washington Post does not constitute progress[1]. The fact that the prime minister’s press person artlessly emphasized that it was the first time for the Prime Minister to associate the Comfort Women with trafficking should have drawn a red flag. Abe uses a linguistic sleight of hand that appears in one context to acknowledge the Comfort Women experience, while in another distancing the Japanese state from responsibility. He has done more to muddle his intentions than to clarify them. Human trafficking suggests coercion, but this always implies private sector, not state, responsibility.

A. Abe and his government continue to believe that the Comfort Women were mainly Korean and not coerced by any Imperial Japanese governmental person or entity.

B. Since 2014, the Government of Japan has asserted that the term “sex slaves” is inappropriate for the “Comfort Women.” At a 2014 meeting of the UN Human Rights Committee, Osamu Yamanaka, Director, Human Rights and Humanitarian Affairs Division, Foreign Policy Bureau, Ministry of Foreign Affairs, stated that Japan “had carefully considered the 1926 Slavery Convention and did not consider comfort women as a slavery issue.”[2]

C. There are two Japanese expressions for human trafficking/trafficking in persons.

a. 人身売買 [jinshin-baibai] – literal translation is “human-body selling-buying.” This is the expression Abe told the Lower House Budget Committee (March 30)[3] that he used in speaking to the Washington Post. It is often used in the vernacular.

b. 人身取引 [jinshin-torihiki] – literal translation “human-body deal/transaction” This is the official translation used by the Japanese government for the UN term “trafficking in persons” as written in the “Protocol to Prevent, Suppress and Punish Trafficking in Persons, especially Women and Children” [4], which the Japanese Diet approved in 2005.[5]

For a full discussion of the definitions of these terms and their use in Japan see The Japan Network Against Trafficking in Persons (JNATIP), an NGO that has long tackled the issue of trafficking in the country. Jinshin-baibai is a pre-2000 term focused on the buying and selling of people for sexual exploitation, while Jinshin-torihiki is the modern term that includes sex slavery and organ trading. Here is a chart they have on their website outlining the differences.

D. Article 3 of the Protocol provides the definition of “trafficking in persons” as follows:

(a) “Trafficking in persons” shall mean the recruitment, transportation, transfer, harbouring or receipt of persons, by means of the threat or use of force or other forms of coercion, of abduction, of fraud, of deception, of the abuse of power or of a position of vulnerability or of the giving or receiving of payments or benefits to achieve the consent of a person having control over another person, for the purpose of exploitation. Exploitation shall include, at a minimum, the exploitation of the prostitution of others or other forms of sexual exploitation, forced labour or services, slavery or practices similar to slavery, servitude or the removal of organs;

(c) The recruitment, transportation, transfer, harbouring or receipt of a child for the purpose of exploitation shall be considered “trafficking in persons” even if this does not involve any of the means set forth in subparagraph (a) of this article;

(d) “Child” shall mean any person under eighteen years of age.[6]

E. What does jinshin-baibai mean in Japanese?

· The Japanese expression jinshin-baibai has the strong implication of selling and buying by private agents.

· The English word "trafficking" is broader and suggests the forced recruitment/acquisition of a person.

· This touches on the sensitive issue (among Japanese conservatives) of forcible recruitment/acquisition of the Comfort Women by members of Japan’s military and government.

· Japanese commentators believe Abe used intentionally the less inclusive phrase to show his domestic audience that he still does not accept that the Comfort Women were forcibly recruited while acting in such a way that he does not seem to the western world that he objects to the idea. Instead, they were part of what some in Japan see as a socially acceptable, culturally appropriate transaction of the time. [Debt bondage, however, was technically illegal in Japan since 1872.]

F. Abe’s intent was to be ambiguous. On March 28th, the Sankei Shimbun quoted an unnamed "high-ranking government official" as saying that jinshin-baibai [human-body selling/buying] “which means selling and buying of human bodies like chattel”, as the paper explains, does not imply/include forcible recruitment." The paper concludes that the Prime Minister meant to draw a line between his view that parents sold their daughters to brokers and the forcible “recruitment” of girls by members of Imperial Japan’s military and government officials.[7]

For Abe and his revanchist cohort, the Comfort Women issue is about who was responsible for trafficking these women and making their life miserable. The answer, they believe, is that Korean Comfort Women were either sold by their Korean parents to, or deceived by, Korean private agents. The Imperial Japanese government, in any form, was not involved. There is no recognition that it was the state that commissioned these agents and allowed for a trafficking system to exist in a tightly controlled police state.

Abe’s use of the term human trafficking in English holds a number of dangers for him and the US Government.

A. The US State Department 2014 Trafficking in Persons Report identifies Japan as a Tier II Country, meaning, “The Government of Japan does not fully comply with the minimum standards for the elimination of trafficking.”[8]

Abe inadvertently highlights the fact that Japan does not share the same norms or values as other G7 countries regarding women and trafficking. In addition, he calls attention to modern Japan’s (Meiji onward, 1868-) long tradition of trafficking women, from the karayuki-san to the ianfu to today’s Japayuki “hostesses.”[9]

B. The US State Department links Comfort Women trafficking specifically to the Japanese military. Abe’s statement contradicts or possibly negates this position.

On March 2nd, the State Department’s Foreign Press Center responded to a Yonhap News question regarding the US Government’s stance on the Comfort Women with

The trafficking of women for sexual purposes by the Japanese military during World War II was a terrible, egregious violation of human rights. President Obama has said, it is in the interest of both the Japanese and the Korean people to look forward as well as backwards and to find ways in which the heartache and the pain of the past can be resolved, because the interests today of the Korean and Japanese people so clearly converge. We encourage Japan to continue to address this issue in a manner that promotes healing and facilitates better relations with neighboring states. We also emphasize the importance of treating surviving women with dignity and respect.[10]

On April 1st, however, the US State Department welcomed Japanese Prime Minister Shinzo Abe's recent remark that referred to Comfort Women as victims of “human trafficking.” The spokesperson said “We have welcomed Prime Minister Abe's positive messages in 2015 on history issues and Japan's postwar contributions to peace," adding, We see his interview with The Washington Post in this same light.”[11]