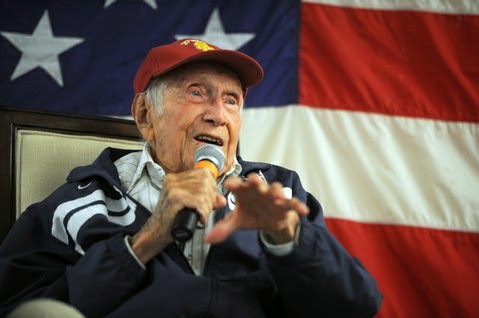 The Daily Telegraph in "Japan's nationalists attack Angelina Jolie war film" quoted my observation on these Japanese right-wing attacks on Louis Zamperini. The Rightists contend that he exaggerated the brutality of his experience as POW of Japan. They suggest his memoirs, like those of the Comfort Women, are fabricated and designed to embarrass Japan.

Astounded by this reaction, I tried to emphasize to the reporter the political realities in the United States involved in questioning the heroism of a World War II veteran. I said,

Many found the quote outrageous as implying a moral judgment that the suffering of the Comfort Women was somehow less important or less deserving of public attention than that of a white, male veteran. On reflection, I understand that perception, but I was really trying to make two different points. Let me explain.

First, I meant to point out the relative difficulties of uncovering the truth about the victims of Japan’s war crimes and how the Japanese right exploits these. So much depends on the victim’s personal story and their traumatic memory. Little documentation survived the ordered massive destruction of records held by Imperial Japan.

This challenge for historians is compounded by the fact that until very recently few cared about women’s accounts of their war experience. War was about men and their triumphs, struggles, and failures. Few records exist about the Comfort Women because no one at the time felt their existence significant enough to record. And they themselves generally could not write of their experiences. They became invisible by the silence.

Indeed, Japanese military ship manifests listed the trafficked Comfort Women merely as “logs” or “items.” And the American military did nothing to investigate why they found Comfort Women on the battlefield. They simply saw the women as a quaint Japanese “amenity.”

The Comfort Women have had to struggle to have their words believed. And they have had to wait until society understood what happened to them was wrong and that it was ok to discuss sexual violence. It was not until the 1970s that rape was recognized as about power not sex and that trauma recognized as creating deep psychological scars.

The racist and sexist ideologues of the Japanese right believe it is easy to question the memories of women who were forced into sexual slavery for the Japanese military. They play upon prejudices toward Koreans and old, embedded misogynist views of women. They feel safe that the former comfort women are poor and illiterate living on the fringes of society. Few, they reason, will defend them.

Second, the Japanese right continues to believe that the Comfort Women cannot be heard and have no constituency. In this they are wrong. They are even more wrong to think that about the American POWs of Japan. Whereas the support groups for the Comfort Women had to be built, the ones for Mr. Zamperini already exist.

Veterans' organizations from the VFW to Rolling Thunder, current and past Olympians, conservative Christians, and University of Southern California alumni will all rally to protect his memory. Embedded in today’s America is a “thank you for your service” given to all veterans. Politically, both the veteran’s organizations and the Billy Graham Evangelistic Association are large and powerful.

Denying the history of America’s WWII veterans is more difficult than doubting the words of abused, marginalized women. Neither denial is honorable or acceptable. But men documented their war in newspapers and books. The war crimes trials across the Pacific documented and focused on the maltreatment of male prisoners of war.

It is interesting to note that on the Rev Graham’s Association homepage is an advertisement for “After Unbroken: The Rest of the Louis Zamperini Story: Captured By Grace.” The movie, Unbroken, will be released on Christmas Day. The book Unbroken has been on the bestseller list, among the top ten, ever since it was released in 2010. A young reader’s edition is now available.

The Comfort Women denials have offended Americans. The denials of POW abuse will enrage Americans. But maybe that is what Prime Minister Abe Shinzo and his supporters want.

For those interested in the history of the American POWs of Japan, I maintain another blog focused on this subject HERE.
at December 15, 2014