After the Election –
What Happens Next?

His opponents say "Abenomics" is dead.
Will Abe's gamble pay off? 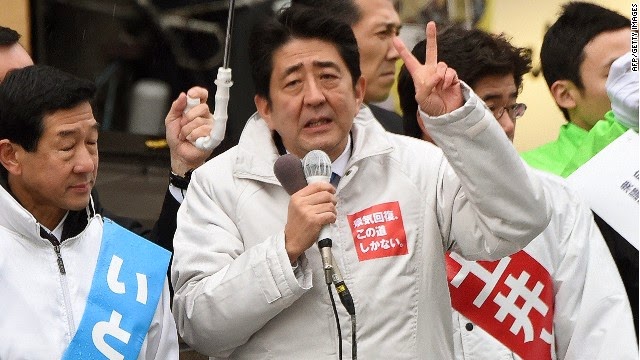 Prime Minister Shinzo Abe's surprise decision to call a snap general election has succeeded in at least one of its aims – it has caught Japan's divided political opposition on the hop. Abe is betting that he can persuade voters to return him to power with a stronger mandate, despite the fact that the country is technically in recession.

His conservative government wants to cut corporate taxes, boost defense and reduce Japan's huge public debt by raising the sales tax by two percent next year. He launched his cabinet in late 2012 with a three-pronged plan of fiscal expansion, loose money and economic reforms – known as "Abenomics." His opponents say the plan is dead. Abe says he is only getting started.

Will Abe's gamble pay off, and what can we expect after the election? As always at the FCCJ, we have invited some of Tokyo's best political thinkers to explain the likely outcome of the election. Michael Thomas Cucek runs the highly respected political blog Shisaku, a must-read for anyone interested in the machinations of Kasumigaseki. He is also anadjunct fellow of Temple University Japan, ICAS.

Toshikawa is a founder and editor-in-chief of Tokyo Insideline, a bi-weekly publication. One of the most astute and well-informed observers of Japanese politics, he is a well-known figure through his reporting and frequent TV appearances. His books include "Kasumigaseki; The Secret of MOF Power," "Japan-U.S. Power Line," and "Power Game Nagata-cho."

Please reserve in advance, 3211-3161 or on the website (still & TV cameras inclusive). The charge for members/members' guest is 1,750/2,700 yen; non-members including guest-members eligible to attend may pay in cash. (Menu: teriyaki chicken and seasonal salad) Reservations canceled less than one hour in advance for working press members, and 24 hours for all others, will be charged in full. Reservations and cancellations are not complete without confirmation. For meal service, please enter the room by 12:55.