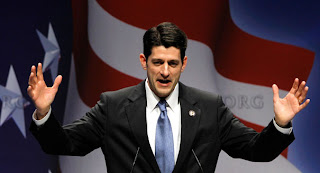 This article is reprinted from the Foreign Policy Blog, Passport that was first published April 5 and updated on August 11th when Mitt Romney named Ryan as his running mate.

If you believe the buzz among political pundits this week, Mitt Romney may have not just picked up a primary win and endorsement from Representative Paul Ryan (R-WI) in Wisconsin. He may have found a running mate. The Washington Post's Philip Rucker notes that Ryan, in what smacked of a VP tryout, appeared by Romney's "side at every turn" in Wisconsin, while the Washington Examiner's Charlie Spiering highlights a recent speech in which Ryan sounds very much like a vice presidential candidate -- conjuring up memories of "flipping burgers at McDonalds" and "waiting tables to pay back my student loans" in a paean to the American dream.

Other political analysts are arguing that whether or not Romney puts Ryan on the ticket, President Obama may run as much against the Wisconsin congressman -- the architect of the House Republican budget plan -- as against Romney. On Tuesday, Obama declared that the budget proposal, which would slash $5.3 trillion in federal spending over the next decade, would pit rich against poor in what amounted to "social Darwinism."

As the campaign spotlight lingers on Ryan, it's worth pointing out that the House Budget Committee chairman isn't a one-trick pony. Sure, he's styled himself as an intellectual leader on fiscal policy. But he has a distinct worldview as well. Here are some of the components of the other Ryan plan.
In the wake of Ryan's foreign policy address last year, Matthew Yglesias argued in the American Prospect that Ryan seemed to subscribe to "more or less the liberal internationalist vision that's already at the core" of the Obama administration's approach. The New Republic's Jonathan Chait mocked Ryan's "Norquistian-Churchillian foreign policy." The Washington Post's Jennifer Rubin wrote that Ryan was one of the few politicians who could draw a connection between "conservative economic principles and American foreign policy and values."

Ryan's worldview, in other words, appears to be a bit of a Rorschach test. And in a general election where appealing solely to the Republican base just won't cut it, that might be exactly what Romney needs.