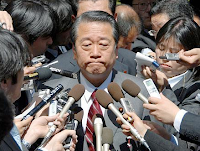 Forget Futenma. All eyes are on Ozawa now.
The Futenma relocation issue is slipping off the Japanese media radar as nothing much is likely to happen until Prime Minister Yukio Hatoyama’s decision in May, and the media have a bigger target in their sights.
Now, attention is on the daily revelations about the questionable flows of money coming in and out of Rikuzankai, the political fund management association of Democratic Party of Japan Secretary General Ichiro Ozawa (pictured). Pressure for him to resign appears to be growing.
Three of his former private secretaries have been arrested for illegal use of political funds, including over the weekend a seated member of the Diet, Tomohiro Ishikawa. Yet, Ozawa has neither moved to step down nor to explain his role. Prime Minister Hatoyama and other DPJ leaders, for now, have decided to hunker down and try to outride the political storm.

Most have lined up firmly behind Ozawa, with almost daily assurances that he will stay. The Party’s avoidance of the issue was evidenced by comments by the new Finance Minister Naoto Kan on a TV talk show on January 17th. He claimed that the money scandal was just a difference in “interpretation” of the law and not a violation, as prosecutors charge.

That denial notwithstanding, calls for Ozawa to fully account for funding suspicions are coming not only from opposition leaders, but also from coalition member Social Democratic Party. The defiant Ozawa continues to stonewall, claiming that neither he nor his former aides did anything wrong.

At the party convention on January 16th, they vowed to fight prosecutors’ allegations to the end. Party members, applauding, seemed largely to agree. The DPJ, further, has gone on the offensive by setting up a task force on January 18th to investigate the investigators.

One group of DPJ members, the Ryoun-kai, lead by Land Minister Seiji Maehara, is less supportive and increasingly outspoken. On Sunday, Maehara told a gathering in Shizuoka that "if Secretary-General Ozawa maintains his innocence, he should comply with prosecutors' questioning and fulfill his accountability."
The day before, Maehara met at a Tokyo restaurant to discuss the Ozawa issue with Foreign Minister Katsuya Okada, Senior Vice Finance Minister Yoshihiko Noda, House of Representatives Committee on Financial Affairs Chairman Koichiro Gemba, former Lower House Vice-Speaker Kozo Watanabe, State Minister for National Policy Yoshito Sengoku, and former head of the DPJ Policy Research Committee Yukio Edano. The long knives are out, it appears.

Keeping Ozawa on is risky for the DPJ come July’s Upper House election. His role as election strategist is deemed essential, but if he continues to stonewall on explaining his part in the money scandal, the hemorrhaging of public support for the party will continue. Strong until now, public support for the Hatoyama government and the DPJ is dropping. The public weren't kidding when they voted for change.

In the latest Yomiuri poll, taken over the weekend, 70% of the public thought that Ozawa should resign his post, and 50% wanted him to resign his Diet seat. Kyodo and Asahi polls had similar results. Though the Hatoyama cabinet support rate in the three polls plummeted, the Kyodo poll, showing support down 10 points from only a week ago, now finds 44.1% against and 41% in favor of the Cabinet. Cabinet support dropped 11 points from a week ago in the Yomiuri survey to 45%, and slipped 6 points to 42% in the Asahi poll.

The DPJ’s support rate also dropped, down 5 points to 34% in the Asahi survey. Major dailies weighed in with editorials over the weekend demanding a full explanation from Ozawa. Some, like the Asahi, even hinted that he should consider resigning.

If Ozawa stays put, the opposition parties may block debate on the budget to demand his testimony. His intransigence also risks dividing the party as public support plummets. Calls not just for a full accounting but even for his resignation could start to be heard from DPJ lawmakers increasingly worried that the promised land of Upper House control appears beyond reach.

Criticism will likely be directed, too, at Hatoyama, for “again” failing to manage a critical issue. Unaffiliated voters, whose abandonment of the LDP gave the DPJ its landslide victory in the Lower House election on August 30th, could just as easily decide to bestow their affections elsewhere come the July poll.