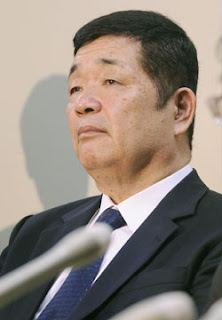 Interviewed in the January 2010 issue of the monthly literary journal Chuokoron, former Vice Minister of Defense Takemasa Moriya (pictured) reveals much about the lengthy negotiations between the United States and Japan to close and relocate the Marine Corps’ Futenma Air Station in Okinawa.

He had been intimately involved in the process. Currently, Mr. Moriya is appealing his 2008 conviction for taking bribes from a defense equipment trader. Although the details are new about the 1996-2006 wrangle centered on the Futenma relocation that ended in agreement to build a V-shaped runway on the shores of Camp Schwab, Moriya’s real purpose in his kiss-and-tell interview seems to have been to lay specific blame on political leaders in the central, prefectural, and local governments, as well as local commercial interests – competing for contracts for land reclamation and construction of the runway – for the setting and breaking of agreements that have led to the current impasse in resolving the fate of the Marine base in downtown Ginowan City – deemed one of the most dangerous in Japan.

It is clear from Moriya’s narrative that in his mind, the security interests of Japan and the interests of residents near the base were always secondary in the minds of many of those responsible in Tokyo and Okinawa for decisions on the base relocation. He sees the US government, always negotiating in good faith, as the collateral victim, unable to close down and revert Futenma as intended and pressed always for compromises, including a drive to reduce forces in Japan and Okinawa, that would weaken its deterrent capabilities in the region.

Prime Minister Hashimoto, the main figure in the drive starting in 1996 to bring closure to the Okinawa base problem, which was sparked by the September 1995 rape of a schoolgirl by three US soldiers, comes across as well-intentioned but constantly sandwiched between the US and Okinawan interests. Moriya for the most part does not name names of those tugging behind the scenes for commercial advantage, but he does point the finger at former defense ministers Kyuma and Nukaga, as well as Okinawa governors Ota, Inamine, and Nakaima, for the string of broken agreements that have prevented Futenma from reverting to Japan. Local politicians, fronting for business interests in Okinawa, are seen as playing high stakes poker for spoils largely unrelated to the Futenma resolution.

Laying blame even wider, Moriya cites rumors of influential politicians buying up mountains that could be exploited for the lucrative land-reclamation project. Only Moriya and his colleagues at the Defense Agency (now a ministry) come across as well-intentioned in the negotiations. Moriya takes credit, for example, for convincing US negotiators, when the original plan for an offshore runway was blocked by environmentalists, to accept a land-based plan at Camp Schwab that should have been acceptable to all in resolving the relocation issue. Local interests undercut it by insisting that only a sea-based option – involving lucrative contracts – was acceptable. The eventual second compromise agreement in 2006 for a V-shaped runway along the shore of Camp Schwab (Henoko district of Nago City in Okinawa) was also blocked, this time by a lineup on the Okinawan side from the governor down allegedly to push for a more lucrative sea-based option, creating the impasse that the Democratic Party of Japan inherited when it won the August 30, 2009, Lower House General Election.

Based on Moriya’s revelations, it is no wonder that the new DPJ administration started out by seeking a review of the 2006 agreement on Futenma that continues to be rejected in Okinawa. It is up to the Hatoyama government to unravel the knot of domestic politics, but not drop national security and Okinawan interests.