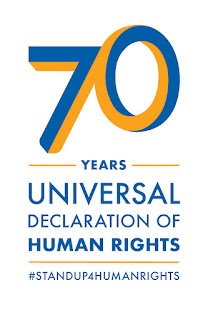 December 10th was the 70th anniversary of the Universal Declaration of Human Rights (#StandUp4HumanRights!). It is International Human Rights Day.

Human Rights Day is also when the Nobel Peace Prize is awarded. This year it is of special interest to those who care about the Comfort Women as the honors went to Denis Mukwege and Nadia Murad for their efforts to end the use of sexual violence as a weapon of war and armed conflict and the UN Security Council held an Arria-formula meeting on "Raising the effectiveness of atrocity crimes prevention: role of the United Nations Security Council and its Members".

Few appreciate the role of Asian states and diplomats in forming the Universal Declaration and modern human rights principles. Recent scholarship has highlighted extensive involvement in the 1940s by Asians in identifying war crimes and demanding accountability. Dan Plesch's work on the UN War Crimes Commission (1943-48) [Human Rights after Hitler] outlines how Chinese and Indian lawyers and officials were deeply involved before 1948 in defining crimes against humanity.

The new book by Robin and Bertrand Ramcharan, Asia and the Drafting of the Universal Declaration of Human Rights describes how the values of the Universal Declaration are very much Asian values and that the future of the world must continue to be inspired by those values. [Springer Press has made the introductory chapter from this book available free on December 10th]

This contradicts the excuses behind the human rights violations in Burma, China, Vietnam, and North Korea. The scholarship also challenges Japanese PM Abe's rationale for revising Japan's "imposed" constitution. From his many statements, he believes the charter's provisions concerning human rights do not accurately reflect the history, culture and tradition of Japan. Concerned critics fear Abe and elements in the LDP want the references to individual liberties removed and replaced with greater loyalties to the state.

The LDP draft published in 2012 confirms as much. Japanese legal expert Larry Repeta analyzes the changes proposed and how they will upend Japanese democracy in Japan's Democracy at Risk – The LDP's Ten Most Dangerous Proposals for Constitutional Change (July 22, 2013).

This focus on traditional Japanese values leads critics to worry that a vital supporter of the liberal international order does not actually believe in the universal nature of human rights as a practical matter. Most Westerners belief Constitutional change is only about Japan's war-fighting abilities. This is merely a backdoor. Japan's conservatives, who are currently running the country are most concerned with rejecting the individual liberties and human rights embodied in the current constitution.

Whereas it remains to be seen if Abe can fundamentally alter Japan Constitution, he has succeeded in adjusting the language both Japanese citizens and foreigners use in describing the history of Imperial Japan. On December 1, all the state-involved news agencies, such as JiJi, Kyodo, and NHK as well as MOFA publications and the English-language Japan Times no longer say "comfort women" or "forced laborers." It is now "women who worked in brothels" and "wartime laborers.

These changes not only erase the actual wartime language used by Imperial Japan..."comfort women" is not something imposed postwar by us... it can be argued that the new language somehow sanitizes the imagery of these wartime tragedies and abuses, and thus flies in the face of every aspect of today's Nobel Peace Prize award.

Human rights are tools that human beings designed to protect ourselves from the arbitrary exercise of power. They are not culture specific. Yet with the proposed changes to the Constitution, the Abe government now finds itself in the uncomfortable position of apparently denying a key human element of the liberal international order.

Working to preserve the histories of the Comfort Women, forced laborers, and all of Imperial Japan's victims is important in that it reminds the Japanese people of the consequences of believing that they are unique and do not share values with others. It is less about those harmed than about the abyss that Japan can again fall. It is about democracy under attack and the values of individual dignity it can protect.

Not all in the LDP want to Constitution revised. In fact, the 10th was also the last day of the current Diet session and the party did not submit any constitutional revisions for consideration.

But if Abe continues to revise Japan's wartime past and cleanse the language used to describe the war, his patience might pay off.