What is a Masakaki Offering?

On October 17, Japanese Prime Minister Shinzo Abe sent a Masakaki offering to the Yasukuni Shrine to celebrate its autumn festival. Although widely reported to be a small tree, it is, as pictured to the right, not a tree.

A masakaki offering includes elements of the sakaki tree, often in plastic, but not the entire tree.

Masakaki (真榊 also まさかき) is a ceremonial article that is placed on both sides of an altar at Shinto rituals. Masakaki is usually decorated with a silk/Nylon flag that has five colors: green, yellow, red, white, and blue — these five colors are about the Theory of Yin-Yang and the Five Elements (陰陽五行説), which represent wood, fire, earth, metal, and water.

The rectangle Shinken (神剣, Sacred Sword) is placed on the left hand side, and the Shinkyo (神鏡, Sacred Mirror) and the Magatama (勾玉, Sacred jewels) are placed on the right-hand side when facing from the front of the Kamidana (神棚). 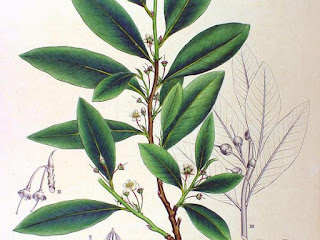 Sakaki  (榊, also さかき, Cleyera Japonica) is a flowering evergreen tree or bush native to warm areas of Japan, Taiwan, China, Myanmar, Nepal, and northern India. It is a common tree planted in gardens, parks, and shrines. Sakaki is considered a sacred tree in the Shinto religion.
at October 21, 2016