Abe ignores his Emperor - at his peril 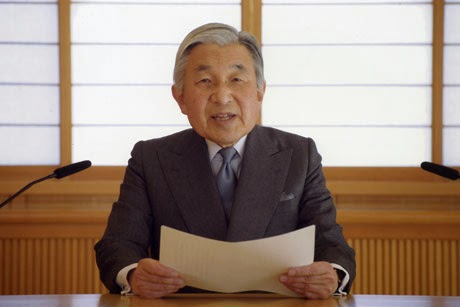 Emperor Akihito raised many an eyebrow in Japan and abroad recently when he used his New Year message to urge Japan’s citizens to learn from history in this, the 70th anniversary of the end of World War II. He specifically referred to the Manchurian Incident of 1931 as the start of the war, which many saw as a not-so-veiled swipe at Prime Minister Shinzo Abe, and other advocates of a ‘revisonist’ view of history, who have tried to diminish Japan's responsibility for the hostilities in the Pacific that ultimately led to Japan’s destruction and surrender in 1945. The key passage in the Emperor’s message was:“This year marks the 70th anniversary of the end of World War II, which cost many people their lives. Those who died on the battlefields, those who died in the atomic bombings in Hiroshima and Nagasaki, those who died in the air raids on Tokyo and other cities-so many people lost their lives in this war. I think it is most important for us to take this opportunity to study and learn from the history of this war, starting with the Manchurian Incident of 1931, as we consider the future direction of our country.”The Emperor’s comment was initially overshadowed by the New Year’s festivities in Japan, but subsequently provoked a subdued but charged debate in intellectual and policy circles.

Below is the first of a two-part discussion about the controversy with Tokyo-based scholar and commentator Jeff Kingston. Professor Kingston is the director of Asian Studies at Temple University Japan, where he teaches courses on modern Japanese history, contemporary Japan, and Japan’s relations with Asia. He has been a regular contributor to The Japan Times since 1988. Kingston’s most recent book, Contemporary Japan, was published in 2012. He has a B.S. degree in foreign service from Georgetown University, and a PhD. in history from Columbia University.

DISPATCH JAPAN: Emperor Akihito referred to the Manchurian Incident of 1931 in several of his past birthday greetings, but never in a New Year’s message. Why do you think it is notable that he brought this up in his most recent New Year’s message?

KINGSTON: It is impossible to know what exactly Emperor Akihito intended with his 2015 New Year Thoughts. His comments were sufficiently vague to avoid giving the impression that he was infringing on constitutional limits that prevent him from weighing in on political issues.

The Imperial Household Agency carefully vets his remarks, so one can only speculate about the message he is trying to convey. In my opinion, the choice of topics is indicative, and must be considered in the context of Akihito’s track record on war responsibility. He has relentlessly crisscrossed the region over the past quarter of a century to express remorse to nations victimized by Japanese aggression.

Akihito has done more than all of Japan’s politicians combined to demonstrate that Japan is not in denial, and is contrite about the horrors it inflicted. Although revisionist politicians and the jingoistic press have worked hard to undermine the emperor’s reconciliation diplomacy, Akihito regards this as the unfinished business of the Showa Emperor (Akihito's father, Emperor Hirohito, who died in 1989), and persists in doing what he can in his circumscribed role.

His record suggests he favors an honest and long overdue reckoning. He has maintained his father’s post-1978 boycott of Yasukuni Shrine that was prompted by the enshrinement of 14 Class A war criminals at that time.

He also rebuked a Tokyo government official who explained to the monarch at an autumn 2004 garden party that he was in charge of enforcing a directive to teachers to stand and sing the national anthem (kimigayo) facing the national flag (Hinomaru). Akihito replied that this is not desirable, and should be left up to individual choice, comments he repeated in the Spring 2005 garden party. The Imperial Household Agency went into damage control mode, arguing that Akihito’s remarks held no political implications, even though they had clearly offered moral support to teachers who complained that their constitutional rights were being infringed on.

So when Akihito refers to the Manchurian Incident, he is weighing in on contemporary history controversies. Prime Minister Abe and like-minded revisionists seek to legitimize Japanese aggression, asserting that it was a war of Pan Asian liberation aimed at lifting the yoke of western subjugation. In addition, revisionists argue that it was a defensive war against escalating pressures from the western powers, the so-called ABCD (American, British, Chinese and Dutch) encirclement thesis.

This interpretation meshes with what scholars call the Fifteen Year War (1931-45), a reference to escalating Japanese aggression in China and a decision in 1940 to widen the war to Southeast Asia in order to secure the resources needed to subjugate China.

This narrative dismisses the Pan Asian liberation thesis as a fig-leaf for Japanese imperialism. Moreover, in 1931 Japan was not being encircled, but rather was carving off part of China to promote autarchy and prepare for the coming war with the US for hegemony in the Pacific. Ishiwara Kanji, the man who planned the Mukden Incident, was Japan’s foremost military strategist, and someone who had carefully studied the lessons of WWI. Total war meant a no-holds barred approach to winning, meaning that civilians were fair game and that economic sanctions were a weapon of war.

Ishiwara believed that Germany lost the war owing to economic sanctions that starved its war machine of what was required to wage war and thus became an advocate of economic autarchy. Manchuria had many of the resources Japan lacked that were crucial for its war machine, so taking it over was aimed at promoting autarchy and getting ready for the coming conflict. The Pan Asian thesis is more appealing to contemporary conservatives because it positions Japan as selfless and sacrificing for the benefit of others.

By contrast, the Manchurian thesis makes Japan look like a greedy predator, invading nations to secure resources and markets just like other imperial nations.

So Akihito’s apparently bland remarks actually resonate loudly in the arena of historiography. They position him in the camp critical of Japanese aggression, and critical of contemporary revisionists like Abe, who seek to rehabilitate Japan’s wartime past and assert a valorizing and vindicating narrative.

Akihito’s view represents the longstanding mainstream consensus in Japan (and elsewhere), but revisionists have bristled at this ‘masochistic’ history that singles Japan out for blame while overlooking Allied war crimes. They argue that the mainstream consensus is based on the judgments of the International Military Tribunal for the Far East (IMFTE), a biased ‘victor’s justice’ narrative.

Judicial process at the IMFTE was indeed very flawed, and the guilty verdicts were preordained, but this doesn't mean that Japan’s military forces, or the architects of war called the Class A war criminals, were innocent. Revisionists often cite the dissenting opinion of Radhabinod Pal as exonerating Japan from the war crimes charges. A memorial to him is even located just outside the Yushukan Museum adjacent to Yasukuni Shrine, the talismanic ground zero for an unrepentant view of Japanese military aggression. In fact, Pal argued no such thing. He dismissed the IMFTE as lacking legal standing in international law, and for the baseless retroactive application of laws it allowed. But Pal readily acknowledged that Japan committed war crimes, and he lamented the fact that the Allies were not in the dock alongside the Japanese, sensibly pointing out that they should also be held accountable.

DISPATCH JAPAN: Why is this relevant to contemporary Japanese politics, and Japan’s national security policy?

KINGSTON: The judgments of the IMFTE, deeply flawed as they may be, are intrinsic to the Treaty of San Francisco that Japan signed to end the US occupation and make peace with the other signatories. In signing the treaty, Japan committed itself to accepting these judgments. Prime Minister Abe often talks about overthrowing the ‘postwar system’, one that most Japanese are rightly proud of. He is unhappy with the denunciatory view of wartime Japan and the US penned constitution, both essential elements of the postwar order that he believes humiliates Japan and keeps it subordinate.

In contrast, Akihito and most Japanese feel that Japan’s exemplary record in the second half of the 20th century brought redemption, and serves as the basis for the nation regaining its dignity. While Abe rails against the Peace Constitution, most Japanese see it as a reassuring touchstone of national identity. That is why his efforts to chip away at Article 9 are so unpopular. Hardly anyone in Japan supports Abe’s reinterpretation of Article. 9 to allow for collective self-defense, because they worry that Washington will drag them into war, and they understand that the new US-Japan Defense Guidelines will facilitate that scenario. Both governments keep postponing formal adoption of the guidelines precisely so they don’t become a liability to the LDP in elections.

DISPATCH JAPAN: So the political right finds itself in the interesting position of opposing the views of an Emperor in whose honor they claim to speak?

KINGSTON: The Emperor’s remarks highlight the horrors of war and send a strong anti-militarism, pro-peace message. He has enjoined Japanese citizens to reflect on the lessons of the past, perhaps because he has witnessed the culture wars since Abe came to power. Many Japanese and long-time Japan observers have expressed dismay about the recrudescence of self-righteous nationalism under Mr. Abe, who has emboldened right-wing extremists.

They have aggressively attacked liberal targets, such as the Asahi, and downplayed some of the more egregious examples of wartime Japan’s depredations, including the comfort women. Akihito is surely aware that Abe did nothing to repudiate colleagues in the Diet who worked to undermine the 1993 Kono Statement, in which Japan accepts responsibility and promises to atone for the sordid system of sexual slavery that involved tens of thousands of young women throughout Asia between 1932-1945. They were recruited through deception and/or coercion, both direct and indirect.

The Asahi’s admission that a handful of their reports on the comfort women over twenty years ago were based on the discredited testimony of Yoshida Seiji has been disingenuously used as a pretext to try to cast doubts on the nature and extent of this system and thereby promote a narrative of minimization and denial. Naturally, Team Abe is manipulating the Asahi affair for political advantage. This saga is, after all, more about politics than journalism, part of a larger culture war being waged by conservatives to redefine Japanese identity on their terms. The Asahi has long been the right’s main media adversary in this culture war and thus a prime target.

There is also the case of Net Uyoku (ultra-nationalists on the Internet) harassing former Asahi reporters and their university employers, threatening to harm students by deploying nail bombs if these former journalists’ contracts are not terminated. And the hate speech campaign promoted by the Zaitokukai (an organization devoted to denying rights to non-citizens – mostly Koreans – residing in Japan), harassing Japan’s zainichi (mostly Korean) community, again threatening death. Abe has tolerated this intolerance, and indeed has acted as cheerleader in chief for the anti-Asahi campaign. This is not the Japan that most Japanese feel comfortable with, and is not consistent with their national identity.

This is the context in which Akihito’s comments can be interpreted as a rebuke and warning.
at January 26, 2015