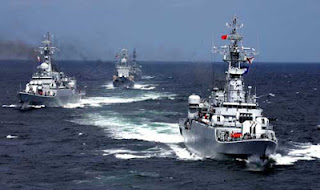 The re-election of Barack Obama signals to Asia that America's "pivot" or "rebalancing" toward that region will move forward in the carefully constructed framework laid out during the president's first term.

But no matter who had won the presidential election, Obama or Mitt Romney, the major geostrategic policy issue in Asia would have been unchanged: how to deal with a rising China. The two candidates spent much time in the campaign accusing each other of being soft on China, portraying that country as an economic "threat" to the United States because it was "stealing jobs" from American workers. Such rhetoric will now fade. In their foreign policies, both Obama and Romney basically approach Asia and the China problem the same way.

A man burns a Japanese national flag during a demonstration in Guangzhou in south China's Guangdong Province on Sept. 18, 2012. Demonstrations were held across China as public anger grew against Tokyo's move to purchase some of the disputed Senkaku Islands in East China Sea from a private landowner. (AP file photo)

From a security perspective, China's formal declaration at the 18th Communist Party Congress of its intention to become a "maritime power," with core interests that intersect the territorial waters of nations in the South and East China seas, may force the United States to accelerate a containment strategy laid out during Obama's first term in office. That strategy involves a reallocation of military resources to the region, such as moving U.S. Marines to Australia, a strengthening of existing alliances in the Asia-Pacific region, and building security ties with nations on China's periphery, such as India, Indonesia and Vietnam. The diplomatic agenda now even includes a recent historical first trip by Obama to Myanmar, once under China's sway. Washington's encirclement strategy of using diplomacy backed up by American military muscle in the region is intended to show China that its hegemonic intentions in the region will not be tolerated.

Japan's increasingly volatile territorial dispute with China complicates the Obama administration's policy intention to use diplomatic means to ultimately steer China away from becoming a potential threat or enemy and instead convince it to become a responsible partner for resolving crucial global issues. While recognizing the competitive aspects in the economic and security areas of the U.S.-China relationship, Washington aims to make sure that collaborative areas are always kept paramount. Under such an accommodation, China would not resort to intimidation or force in resolving its territorial disputes, and would accept the principle of freedom of navigation in regional waters. In broad terms, the United States seeks to ensure that China's rise does not destabilize the Asia-Pacific region, which would be of direct concern to American interests.

Turbulence in 2010, centered first on China's territorial claims in the South China Sea, was an unexpected development. It resulted in Secretary of State Hillary Clinton issuing a strong statement at the July 2010 ASEAN ARF underscoring America's vital interests regarding freedom of navigation and pursuit of water claims without intimidation. Clinton intervened again in September on behalf of Japan when China escalated into a major diplomatic row a fishing boat incident in the East China Sea near the Senkakus, islands claimed by both countries. The secretary of state declared that the U.S.-Japan Security Treaty applies to the islands, which have been under Japan's effective control since the U.S. returned administrative rights over them to Japan in 1972 as part of the Okinawa reversion.

The summer of 2012 saw maritime disputes with China flare up across the South and East China seas. The Senkakus row erupted again in September when Japan's central government purchased three of the isles from their private owner, and even involved extensive riots and destruction of Japanese property in China. Chinese surveillance ships operating near the Senkaku Islands continue to square off against Japanese Coast Guard vessels, keeping tensions high and setting off fears that the standoff could escalate into a more serious conflict.

The incident set off a propaganda war aimed at the international community, with both governments appealing to world opinion regarding the legitimacy of their territorial claim. Beijing also made known its intention to officially revise and extend its continental shelf claim submission in the East China Sea to include the waters around the Senkakus, thus further irritating Tokyo. Although China has recently—and belatedly—tried to play down the island row, serious damage has been done to bilateral relations, taking its toll on tourism, business and other economic activities. Even events to commemorate the 40th anniversary of normalization of diplomatic relations in 1972 were canceled.

Washington has called for cooler heads to prevail, with a State Department spokesman saying that the United States does "not take a position on the sovereignty of the Senkakus" but expects "the two mature countries are fully capable of resolving" their territorial dispute. Washington's worst fear is being drawn into a war between China and Japan over the Senkakus. The U.S. military alliance with Japan is designed to guarantee peace and stability in the region through its deterrence capabilities. It is not intended to act as a lightning rod for conflict.

China's efforts to intimidate Japan by its excessive reaction to the territorial issue in 2010 and the well-orchestrated row in 2012, however, have produced just the opposite effect. Although Japan has remained relatively calm diplomatically, China's actions have riled up the normally complacent public and spurred saber-rattling by politicians on the right. Japan is not backing down.

Ironically, China, instead of driving a wedge between the U.S. and Japan by testing how far the U.S. will go in backing its ally, seems to be serving as a catalyst for reinvigorating the bilateral military relationship. It used to be provocations by North Korea that drove Japan closer to its ally the United States, but now it is China. Defense Minister Satoshi Morimoto has asked the United States for talks to revise the current set of defense cooperation guidelines to reflect the current security environment centered on China. The last set, inked in 1997, posited a contingency on the Korean Peninsula.

Japan's heightened concern about China's ascendancy in the region also explains the do-or-die desire of the administration of Prime Minister Yoshihiko Noda to have Japan join the U.S.-led Trans-Pacific Partnership (TPP). This regional free-trade agreement is seen in Tokyo as a counter lever to China's growing economic influence. Japan, in effect, has bought into the U.S.'s China-encirclement policy.

It is unclear whether China under a new and untested leadership will respond by further raising the ante in this international game of poker, or--aware of the political and economic consequences--seek or accept some kind of accommodation in line with the U.S.'s strategic goals. What is certain, though, is that the Senkakus as a structural issue between Japan and China will not go away. It may be put on the back burner for a while by mutual agreement, as Deng Xiaoping managed to do in the 1970s, but the territorial issue is a card, increasingly risky, that China may be willing again to play in the future.

William L. Brooks, APP Senior Fellow, Adjunct professor at Johns Hopkins University. He retired from the U.S. State Department in September 2009 after a 35-year career as a diplomat and research analyst.
at December 06, 2012