Korea-Japan Standoff: Why Americans Should Care 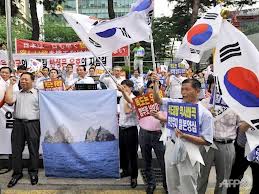 Korea and Japan have spiraled into their worst relations in decades over tensions surrounding a few rocky islets in the ocean between them. Koreans call the islands "Dokdo" and Japanese know them as "Takeshima." Politicians in both countries assure supporters that these barely inhabited spits of land will be defended as theirs at all costs, and the respective foreign ministries have announced multi-million dollar ad campaigns to further publicize their claims.

This territorial dispute has flared with regularity since the collapse of the Japanese empire in 1945; most recently in 2008 when Washington's Bureau of Geographic Names surprisingly altered the islands' legal status in such a manner that only President George W. Bush's intervention could return it to where it was: intentionally blank. During the most recent fracas, Washington has issued its more standard response that America wants our allies to work this out amongst themselves; last week at the APEC meeting in Vladivostok, Secretary of State Hilary Clinton further directed Seoul and Tokyo to "lower the temperature" (subtitles read: "Get your acts together; we have bigger problems").

North Korea's unknowns coupled with China's militarization would seem to demand greater American attention in Northeast Asia, yet the reality is that these rocks deserve our immediate attention. There are over 200 recognized territorial contests in the world; Korea and Japan's dispute is the only one that obligates United States military involvement on both sides to defend one country from the other in the awful event of hostilities, a predicament that returns us to Washington's insistence that the problem is not ours. A little honesty from Washington about America's historical involvement in the standoff would go a long way to detoxify its potential for violence.

The touchstone for today's disputes is the American-crafted Treaty of Peace with Japan, known as the San Francisco Treaty for the location of its signing on September 8, 1951. The treaty formally ended Japan's war against the Allies and the victors' occupation of the country. It also delineated Japan's new territorial limits, officially dismantling the once massive Empire of Great Japan. Strangely absent in the treaty, though, is mention of the islands now causing such a ruckus, a condition made all the clearer by inclusion of the Kurils, which Japan nonetheless continues to contest, too, even though their Yalta gift from Roosevelt to Stalin is long proven.

Almost as soon as General MacArthur's occupying forces moved into the region in September 1945 Japanese interests ranging from fishermen's cooperatives to nostalgic imperialists lobbied to hold onto whatever they could of Japan's vanished reach. The islands now in question appeared regularly in occupation memos and maps with voices arguing each side's claim; overall, American military maps located the islands within U.S. Korean command, while State Department officials quoted Japanese concerns back to Washington to placate local politicians working for them.

By the time the San Francisco Treaty came about a new war was on -- the Korean War -- and the islands by then had new value to American pilots for target practice, becoming vital to American pilots lightening their payloads while returning south from runs over North Korea. Naming Korea's sovereign control seemed without doubt -- the treaty lists Ulleungdo 47 nautical miles to the east as Korean (under its old French name, Dagelet) -- yet the final 1951 document would table ownership to accommodate another concern: what if northern forces grabbed the rock closest to Japan and the island fell into communist Korean hands?

Tabling sovereignty over these tiny rocks made sense to American planners at the time, yet the treaty's absence of named ownership -- and American determination to avoid the subject since -- has allowed a relatively manageable disagreement to become a truly volatile situation.

Japan maintains that Korea has "illegally occupied" the islands since 1952 when Koreans sent patrol units to guard a lighthouse there. Since 2004, Japan's Ministry of Foreign Affairs website has explained its rationale equally in Japanese, English and Korean, among other languages: the San Francisco Treaty does not specifically name the islands Korean, thus the Allies did not not name it Japan's. Koreans respond quizzically that such logic would grant Japan claim to all of Korea's 3,000 additional outer islands.

To some, this may be further example of outdated images of Asian diplomatic opera buffa. Matters could not be more different, which Japan's lengthy justification demonstrates. Tokyo claims that its right to sovereignty over the islands today -- prime fishing grounds for anyone who could get there long before Korea and Japan even had their contemporary names -- derive from a 1905 Japanese Cabinet decision that incorporated the islands into the nation's growing empire. Woefully missing is explanation that Japan was beginning to colonize all of Korea at the time. The islands disputed today are shards of that history's early moments; to make it into anything else simply denies Japan's takeover of Korea.

At the end of June this year, Seoul and Tokyo tabled a military intelligence sharing agreement that Washington desperately seeks less than an hour before it was to be signed; many American pundits looked confused and wondered openly why "they" can't get over "it"? The answer is straightforward: until Japan fully confronts the history of its empire and war in Asia without relying on white-washed phrases of "sorrow and regret," no politician in Korea or anywhere else in the region would be able to stay in office should he or she promote something so obviously evocative of past atrocities as a "joint military intelligence pact."

The United States did not colonize Korea in 1905, but Washington marched America right through the door of this history through involvement in the decolonization process. Honest dialogue about this known history would demonstrate that Washington's desired pivot toward Asia is for the peace and stability of the region and world. Seoul and Tokyo are our allied democracies in a region rife with competing claims to the future; the history wars about a bloody past have been on their streets for over a decade and have gained tremendous intensity through the territorial disputes. Both nations should stop playing with fire: brinksmanship only fuels reactionary response. Meanwhile, Tokyo discredits any claim to global leadership while it persists in imagining an empty past.


By Alexis Dudden, professor of history at the University of Connecticut and APP Member and author of Troubled Apologies Among Japan, Korea, and the United States