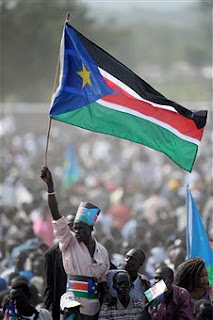 On July 9, the Republic of South Sudan became the world's newest country. Independence follows a referendum vote in January in which 98.83% of South Sudanese voters decided to separate from Northern Sudan and its government in Khartoum. The referendum was a provision of the 2005 Comprehensive Peace Agreement (CPA), which ended the second North-South civil war since Sudan's independence in. The overwhelming vote for independence surprised no one, and most Southern Sudanese view this Saturday as the culmination of their struggle against more than a century of Ottoman, British/Egyptian, and Northern Sudanese oppression.

Juba, the capital city, was a Northern-held garrison town during the war, but has been growing every day since the peace in 2005. The Government of South Sudan has been preparing the city to receive thirty-five African heads of state and innumerable other dignitaries and visitors for the Independence celebrations. A nice, wide JICA-funded bridge over the creek near my office opened on Monday, and the new mayor has been energetically leading a much-needed campaign against litter.

Japan has successfully courted leaders in both Khartoum and Juba, but diplomacy with South Sudan will be more challenging for China. The majority of Sudan's oil is underneath Southern ground. However, all the pipelines, refineries and handling facilities are in the north, which has been sending 65% of its exports to China. The People's Republic gained some points this year in the South with the construction of a hospital in Unity State, Vice President Riek Machar's birthplace. But some of that goodwill was no doubt lost at the end of June, when Beijing hosted Sudanese President Omar al Bashir in the midst of his military aggression in the border areas of Abyei, Southern Kordofan, and even parts of Unity State. The Government of Southern Sudan plans to build a pipeline south through Kenya, but it will be a long time until oil flows anywhere but north.

Oil diplomacy and relations with Khartoum will challenge the new country but the larger issue will be internal tribalism. Cross-ethnic cattle raiding, agriculturalist-pastoralist conflict, factionalism from wartime divisions within the South, and a perception of tribal favoritism in the government combine to create a lot of internal instability.

It is to foster reconciliation that the Church is focusing its work as independence comes. South Sudan has seen very high rates of conversion to Christianity within the last hundred—and even the last twenty—years. Most people at least partially identify with a church, which is often the only form of non-tribal civil society. The five main denominations are Roman Catholic, Episcopal, Presbyterian, Pentecostal, and Africa Inland Church. These and smaller churches are typically very united in message, though their demographics still often reflect earlier missionaries’ territorial division of labor. (Most Nuer Christians, for instance, are Presbyterian.)

The Church’s anti-tribalism strategy has been three-fold. It regularly preaches communal reconciliation, based on similar preaching for Jewish and Greek members of New Testament-era congregations. Together with the government, denominations also promote education, aiding development and occupying young would-be cattle keepers and cattle raiders. And thirdly, especially here in Juba, it preaches against corruption and nepotism, since those vices not only waste meager resources, but breed hostility toward the state.

Church, state, citizens, allies and friends will all have a lot of work to do starting July 10. But no matter how landlocked or unstable, on July 9th, the newly minted citizens of the Republic of South Sudan will be on top of the world.

Reporting by John Marienau Turpin who lives in Juba, South Sudan. He teaches Church History at Bishop Gwynne Episcopal Theological College and works with African Leadership and Reconciliation Ministries (ALARM). He worked for APP from 2004-05.
at August 12, 2011